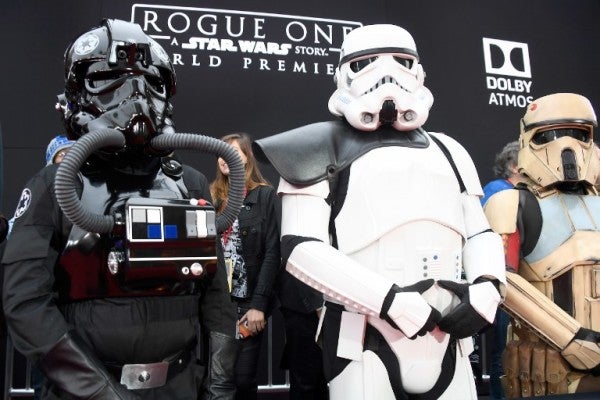 Stormtroopers are seen during the premiere of Walt Disney Pictures and Lucasfilm’s “Rogue One: A Star Wars Story” at the Pantages Theatre on Dec. 10, 2016, in Hollywood, California.  Image: AFP/Getty Images/Frazer Harrison

The first three episodes of the “Rogue One: A Star Wars Story” spinoff on Disney’s streaming service will be helmed by “Black Mirror” director Toby Haynes.

Showrunner and original director Tony Gilroy, who is in New York, has passed the torch to Haynes due to COVID-19 travel-related reasons, as per Deadline’s exclusive report yesterday, Sept. 22.

Haynes, a United Kingdom-based director who helmed Emmy-winning “Black Mirror” episode “U.S.S. Callister,” is taking over the project as it is set to be filmed in the UK.

The “Rogue One” team thought it best to let Haynes take over as he was said to be one of the directors being highly considered to direct future episodes anyway, according to the report.

Despite the move, Gilroy will remain as showrunner and executive producer of the show.

The spinoff is set to join “The Mandalorian” among Disney Plus’ live-action series set in the “Star Wars” universe. “Rogue One” will center on the story of Cassian Andor, a character in the movie played by Diego Luna, who will be reprising it for the series as well.

‘Stormtroopers’ assist at Cebu checkpoints to ease tensions amid pandemic