Twitter looks back on decade of K-pop | Inquirer Entertainment 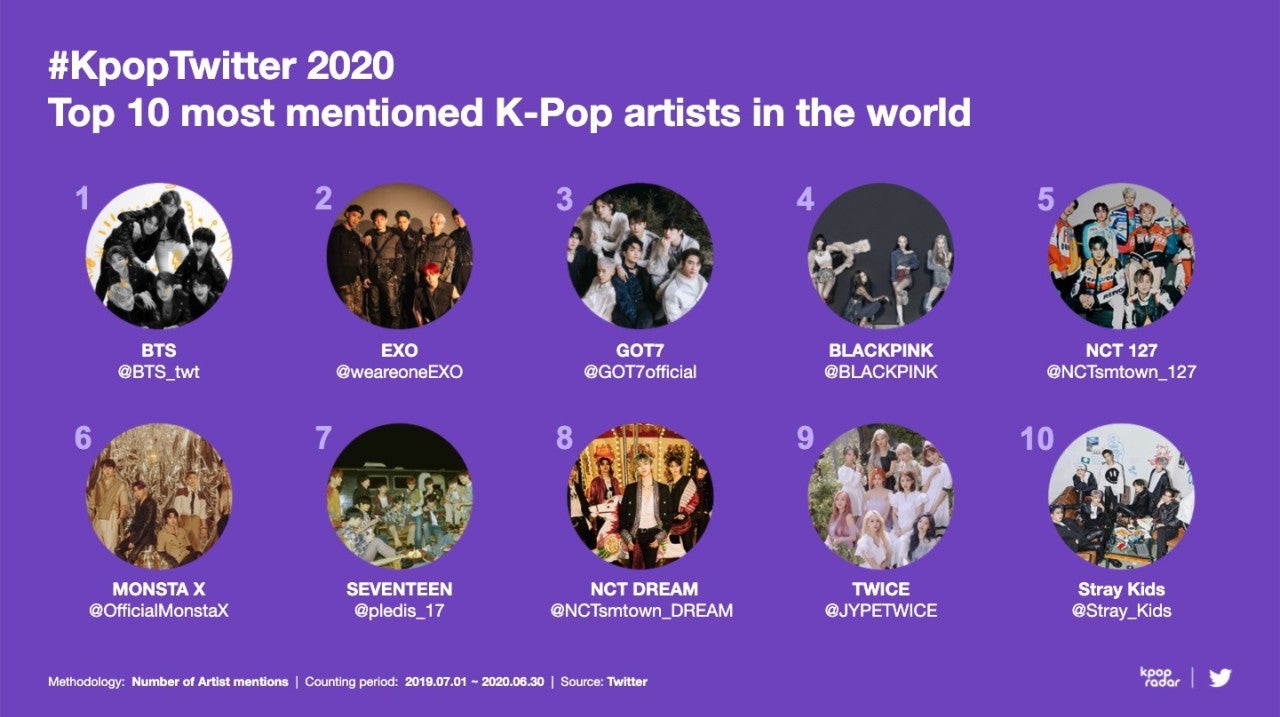 SEOUL — Twitter Korea on Tuesday released a new report, “#KpopTwitter 2020 World Map,” which looks back on K-pop’s rapid growth on the platform over the past decade.

According to the report, K-pop-related content and conversations on Twitter increased monumentally from 2010 to 2020, spanning first-generation acts like Super Junior, Big Bang and Girls’ Generation as well as the latest acts like BTS, EXO, Blackpink, GOT7 and NCT 127.

The upward curve showed the most rapid growth between 2017 and 2018, which saw major K-pop events like BTS bagging Top Social Artist award at the Billboard Music Awards and EXO launching its official Twitter account.

Over the past 12 months alone, over 6.1 million K-pop-related tweets were generated, a sign that the topic remained dominant on Twitter despite the ongoing COVID-19 pandemic.

BTS was the most mentioned K-pop act around the world during the period. Out of the 20 countries that generated the most tweets about K-pop, BTS, having recently made its No. 1 debut on Billboard’s main Hot 100 chart, got the most mentions in 19 — all except Thailand, where GOT7 ranked first.

The most mentioned K-pop song was EXO’s “Obsession,” while four BTS songs — “On,” “Boy With Luv,” “Black Swan” and “Shadow” — followed closely behind.

As for the 10 fastest-rising K-pop acts on the platform, Stray Kids came out on top, followed by Ateez, TXT, IZ*ONE and SuperM.

The US, Japan and South Korea were the three countries with the greatest numbers of K-pop Twitter users, while Thailand, Korea and Indonesia were the leaders in terms of total tweet volume.