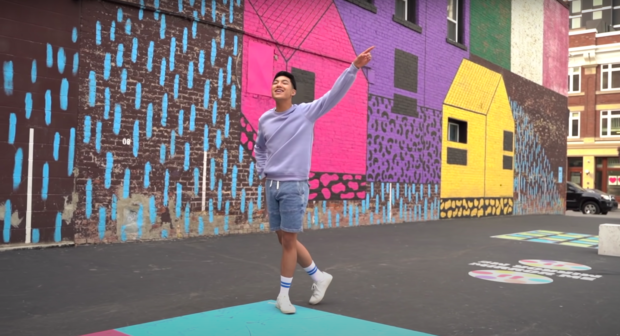 Darren Espanto showed off his moves in a new dance cover set to the tune of BTS’ latest hit “Dynamite”.

The artist decided to groove to the song after asking his fans for suggestions on how to celebrate hitting 100,000 subscribers on his YouTube page.

Following his supporters’ requests, he posted his own take on the track’s choreography on his channel last Sunday, Sept. 20.

Espanto wore a white denim jacket above a black T-shirt and gray pants as he performed in the streets of Calgary, Canada. The video also showed him in a lilac sweater with blue shorts and white shoes while he danced in front of a colorful mural.

Prior to his take on the steps of “Dynamite”, Espanto also impressed his fans with a dance collaboration with AC Bonifacio, set to Major Lazer’s 2019 song “Que Calor”.

Meanwhile, the dance group Mastermind, with members from Eastern Samar, caught the attention of BTS after performing their dance cover of the K-pop hit. JB