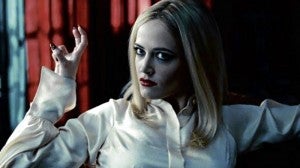 EVA GREEN as a witch in “Dark Shadows”

LOS ANGELES – “I think Johnny Depp is extremely sexy, especially with his long fingers (which) can do many things,” said Eva Green – eyes afire with mirth and naughtiness – about her “Dark Shadows” co-star in a recent interview.

Goaded to elaborate on “many things,” the actress purred, and said in French-accented English said: “Sshhh … I won’t tell you.” Eva, who plays a witch in “Dark Shadows,” arrived dressed in character.

“Oohhh,” said Eva when asked about her sex scene with Johnny. Eva and Johnny – who plays a vampire named Barnabas – fly around the room making passionate love – and wreck the place!

Eva laughed and said: “What’s great is that it’s not like the usual sex scene where you go, ‘Oh my God …’ You don’t sleep the night before and you have 20 people in the room. You feel extremely self-conscious and it’s never sexy. This one was just fun. For me, it was like Ken and Barbie having sex—puppet lovemaking. It was very funny. It was hard to keep a straight face.”

The stunt people did all the hard work, according to Eva. “Otherwise, I probably would not have survived it,” said the actress, who was memorable as Vesper Lynd, the true love of James Bond in “Casino Royale” (Daniel Craig’s first 007 movie).

“I hope I’m not like Angelique,” Eva said of her “Dark Shadows” character, who turns Barnabas into a vampire and then buries him alive when he breaks her heart. “I would do a lot for love but I wouldn’t put my boyfriend in a coffin,” she said. 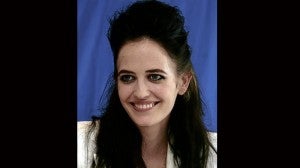 GREEN during the interview, right, talked about her sex scene with Johnny Depp: “It was very funny.” Ruben Nepales

The daughter of French actress Marlene Jobert, Eva pointed out: “I call Angelique ‘Ballsy Barbie.’ There’s something strong and cuckoo about her. I have a tendency to be drawn to dark characters who still retain their humanity, although with conflicted feelings. That’s always interesting.”

Eva praised her co-stars—Michelle Pfeiffer and Helena Bonham Carter—in Tim Burton’s big screen adaptation of the TV series in the late 1960s. “They’re very normal people,” she said. “They make you feel very comfortable. There’s no tension or pressure. It could be a set for a small film.  Sometimes you feel, my God, there’s lots of money involved here. But there’s also lots of love and trust on the set.”

Recalled Eva: “Helena was very supportive and wonderful from the start. She knew I was nervous. I was worried about getting fired! Michelle is an amazing actress and was also very supportive, saying, ‘You go, girl. It’s going to be fine.’ Thank God they were around.”

Eva debuted on film in a major way – through Bernardo Bertolucci’s “The Dreamers.” She played a young Parisian who engages in a ménage à trois with Michael Pitt and Louis Garrel. (Jake Gyllenhaal reportedly dropped out due to concerns over the provocative sexuality.) 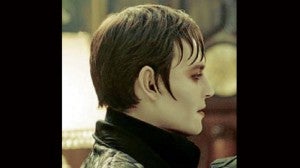 Asked why she rejected the female lead role who manifests violent sexual behavior in Lars von Trier’s “Antichrist,” Eva answered: “It was a complicated issue. We didn’t agree on some matters …”

Charlotte Gainsbourg took over the role and won the Cannes best actress award in 2009.

Eva sounded excited to play Artemisia in “300: Battle of Artemisia,” the follow-up to the Gerard Butler blockbuster. “It’s also a very strong role,” she said. “She’s commander of the Persian armada.”

To look the part of a fighter, Eva changed her diet the day after this interview. “I will drink a bit of wine tonight and then that’s it,” she said, with a hint of resignation. “We’ll have to see each other in two months … I might look like a man!”

People judge all the time

Of the tough competition in show biz, Eva, who lives in London, commented: “People judge you all the time. You’re hot. You’re not hot. You’re bankable. You’re nothing. I shouldn’t take it personally, but it’s hard not to.”

When she wants a break from all the glitz and competition, Eva likes to retreat to Megève, a ski resort in France. “Hanging out with cows is fun,” she quipped.

E-mail the columnist at rvnepales_ [email protected] Follow him at http://twitter.com/ nepalesruben.