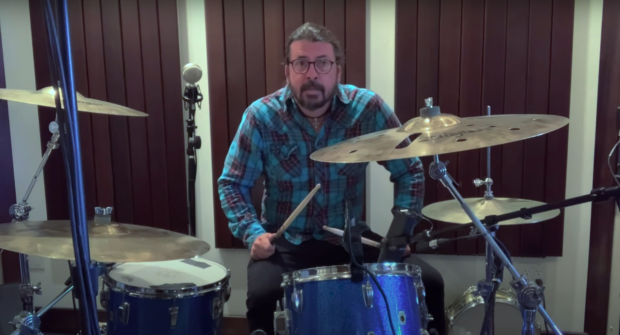 Rock star Dave Grohl has composed a song for a 10-year-old drummer who challenged him to a drum-off last month.

After admitting he lost the first round of the battle with the young musician Nandi Bushell, Grohl debuted the new piece on the Foo Fighter’s Twitter page yesterday, Sept. 14.

“Ok @Nandi_Bushell…. Round 2!” he said alongside a clip of his performance. “Every superhero needs a theme song. Here’s one for you!”

Ok @Nandi_Bushell….Round 2! Every superhero needs a theme song. Here’s one for you! Mad props to The Grohlettes for the background vocals. pic.twitter.com/js9xBasbpw

He also thanked “The Grohlettes” for the background vocals. Grohl’s daughters, Violet, Harper and Ophelia make up the little group, as per the New York Post.

“OK, Nandi! You got me. You win Round 1,“ Grohl said in the video before playing the song.

Grohl then starts playing the drums as Nandi’s name appears in the frame. Along with his drumming, the video also shows the musician playing three different guitars while singing the lyrics.

The track also speaks about how she played the Foo Fighter’s 1997 hit “Everlong” and describes her as a “Queen of Rock and Roll.” Following Grohl’s performance, Bushell expressed her gratitude on her own page.

“Thank you so much Dave. You have raised the stakes to all instruments! I accept your next challenge!” Bushell added. “Thank you to the whole Grohl family! @foofighters”

She also posted a video of herself reacting to the new song written by her idol, where she could not contain her excitement.

I cant believe Mr. Grohl wrote a song about me!?! This is so so so #EPIC!! I think its the best song EVER, in the WORLD, EVER!!! Thank you so much Dave. You have raised the stakes to all instruments! I accept your next challenge! Thank you to the whole Grohl family! @foofighters pic.twitter.com/rWgTBwEtyb

Bushell issued the challenge to Grohl on Aug. 18 while she played “Everlong” on the drums. She rose to fame for her energetic renditions of rock songs using different instruments such as the electric guitar and bass.

My dream is to one day jam with Dave Grohl, @taylorhawkins and all the @foofighters! Mr Grohl I would love to have a drum battle with you! I LOVE Everlong it’s really hard to play as it’s so fast but so much FUN! #foofighters pic.twitter.com/Pmdhvl57uu