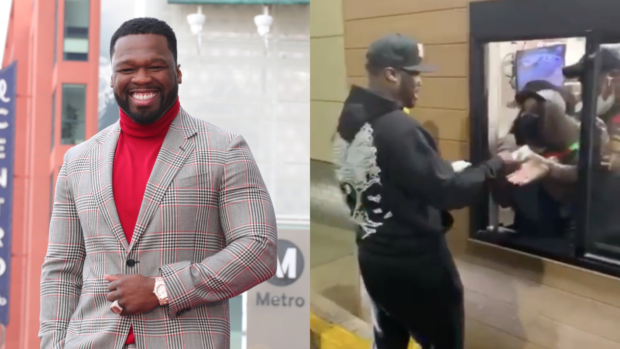 Rapper 50 Cent gave away over $30,000 (more than P1.4 million) in cash tips to fast-food workers in his hometown Queen in New York.

The artist, whose real name is Curtis James Jackson III, surprised the employees with social media influencer Jay Mazini, as per his Instagram post on Sept. 9.

“@jaymazini is the real deal, he saw me in the hood yesterday so we went tonight and showed everybody some love,” the Jackson said.

yesterday so we went tonight and showed everybody some love.

Mazini first spoke with the employee manning a local Burger King’s drive-thru window before Jackson appeared. The social media star asked the staff member how many were working with her at the time and had all of them approach the window.

When they gathered by the window, Mazini began handing out dollar bills to each of them. Shortly after, the rapper walked toward them and gave away money from his own pocket as well.

One worker could not help but shout and thank the rapper for his generous act.

“This is amazing! Thank you!” she said.

The cheers and crowd surrounding Jackson and Mazini eventually drew the attention of police nearby. However, the rapper assured them that they were fine and even offered the money as well, which the cops refused.

Following their sudden giveaway, Mazini also spoke about the surprise on his own profile.

“PASSED OVER 30K ME & @50cent TO THESE HARD WORKERS, DURING THIS PANDEMIC,” he said.

PASSED OVER 30K ME & @50cent TO THESE HARD WORKERS, DURING THIS PANDEMIC. FIF TOLD ME I REALLY LIKE WHAT YOU’RE DOING, I TOLD HIM IT’S GOOD KARMA AT THE END OF THE DAY BIG BRO!!! CHANGE LIVES & CONNECT WITH REAL ONES.. SOUTHSIDE QUEENS STAND UP!! YA DESERVE IT 💯💯💯💯💯🙏🏽🙏🏽🙏🏾🙏🏾

Mazini also hinted at working on a project with Jackson, telling his followers to “stay tuned to what’s about to come.”  /ra