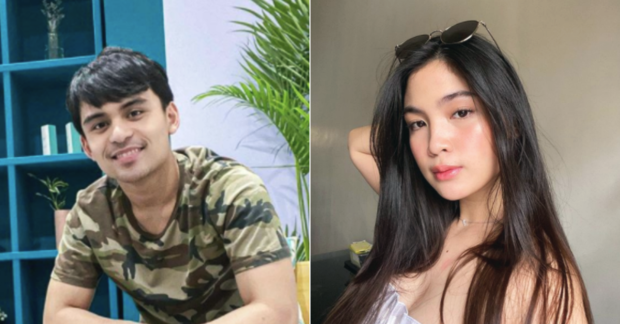 Jimuel Pacquiao (L) defended his ex Heaven Peralejo from rumors that she has been asking his father for money. Image: Instagram/@pacquiao.emmanuel, @heavenperalejo

“I would like to clarify that the issue posted by Lolit Solis and [Fashion Pulis] about Heaven is false. There was no money given and there was no communication,” he said. “We keep getting involved in these issues and I just want to clear things up. She is not that type of girl and we are in good terms so no need for all the bashing.” 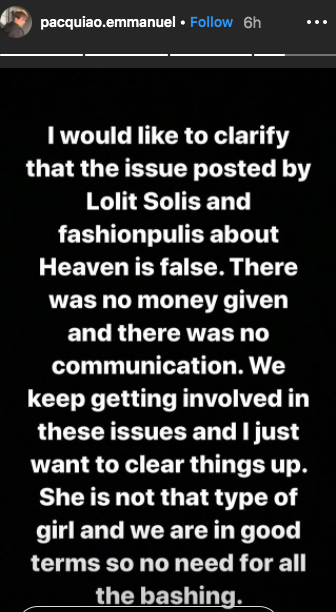 Solis meanwhile said in a succeeding post yesterday, Sept. 13 that Jinkee wanted the post about her giving away P100,000 taken down supposedly because of negative reactions.

“Never ako nagbura ng post kasi nga pinapanindigan ko ang bawat sabihin ko,” Solis said. (I have never taken down a post because I stand by everything I say.)

Solis also made a separate post yesterday stating that Peralejo’s manager Ogie Diaz defended the actress, stating that it is “impossible” she would have financial problems because she still had endorsements.

Peralejo has yet to speak up on the matter.

The “Pinoy Big Brother” alum previously debunked rumors that she relied on Jimuel and his family for her finances, stressing that she worked for her money.

The two confirmed they were dating in March 2019. Jimuel said on the talk show “Tonight with Boy Abunda” last February that he and Peralejo broke up twice and that they were now “good with each other.” JB

Read Next
South Korean actress Oh In-hye found unconscious in her home
EDITORS' PICK
Duterte meets with Cayetano, Velasco amid speakership issue
Feud is over: Velasco next Speaker on Oct. 14
Water remains our saving grace right now
House to probe Facebook takedown of gov’t accounts
Get 80% OFF Ignite 2020 Cyber Tickets starting 28 September
Smart poised to turn PH into ‘Smart 5G country’ with nationwide rollout
MOST READ
Velasco to take over as Speaker on Oct. 14
‘I offered to resign’ because of endless corruption, says Duterte
Duterte will ask Congress to abolish PhilHealth
LOOK: The Mountain from ‘Game of Thrones’ welcomes first son with wife
Follow @NGunoINQ on Twitter
Don't miss out on the latest news and information.