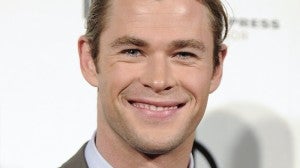 Actor Chris Hemsworth attends the premiere of "The Avengers" during the 2012 Tribeca Film Festival in New York. AP/Evan Agostini

Chris Hemsworth finished shooting Joss Whedon and Drew Goddard’s “The Cabin in the Woods” in 2009, long before he won the bragging rights to wear the God of Thunder’s cape and costume in “Thor” and “The Avengers.” But, like his unexpected jump to Hollywood’s A-list last year, nobody would have guessed that the long-shelved chiller he starred in would hit it big upon its release three years later—and even gain a cult following!

If you haven’t had your fill of “The Hunger Games’” heady thrills, cheeky humor and unexpected twists, “Cabin” is the perfect movie to further whet your appetite. Be forewarned, however—the movie is not your cookie-cutter slasher flick that pulls out all the stops just until the lone survivor foils the vengeful monster’s nefarious plans. In this movie, the baddies’ reason for being goes beyond maiming their hapless victims—and everything isn’t as it seems.

At the heart of the story are five college students—Curt (Hemsworth), the self-absorbed jock; Dana (Kristen Connolly), the timid virgin; Jules (Anna Hutchison), the feisty slut; Holden (Jesse Williams), the sensitive nerd, and Marty (Fran Kranz), the stoner geek—who, despite their differences, decide to go to a remote cabin in the woods for a weekend of fun.

When a strange cellar opens during a fateful game of Truth or Dare, the clueless quintet ends up mouthing a strange incantation that opens a Pandora’s box—of monstrous freaks, flesh-nibbling ghouls, blade–wielding zombies, etc.! Unknown to them, a team of technicians are watching their every move, “leading” them to make decisions that would please both their bettors and unseen benefactors. Then, the plot further thickens.

Whedon and Goddard incorporate a potpourri of slasher cinema’s tried-and-trite “rules” to establish a seemingly familiar story. But, when you least expect it, they turn everything around and spring one surprise after another—until the film’s exhilarating (and cautionary) finale.

The gorefest that follows may be too much for younger viewers, and the film effectively makes its point—but, hey, no spoilers here. That said, we’ll leave you with this nagging question: Is man’s free will as indispensable as the repercussions of the hard choices he’s forced to make? The answer seems obvious —but, are we ready to do something about it?