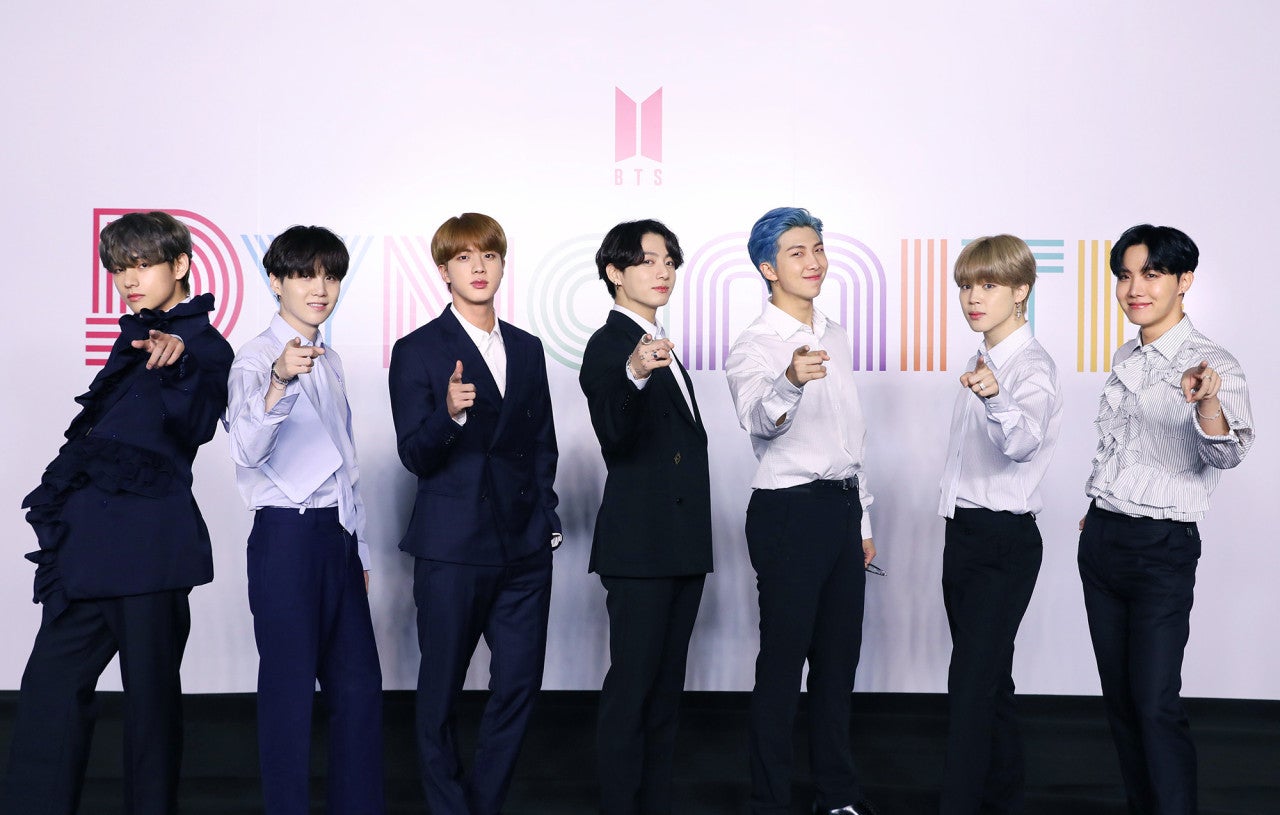 SEOUL — BTS became the first South Korean artist to land at No. 1 on Billboard’s main singles chart in the United States on Monday.

“BTS achieves its first No. 1 on the Billboard Hot 100 songs chart, as ‘Dynamite’ debuts at the summit,” Billboard reported Monday, one day before its chart will be refreshed.

Previously, the highest-charting South Korean artist ever on the Hot 100 was soloist PSY with his 2012 viral hit “Gangnam Style,” which peaked at the No. 2 spot.

The only Asian to make it to the top of the Hot 100 in the past was Japanese singer Kyu Sakamoto with “Sukiyaki” in 1963.

But on the Hot 100, the septet had managed to go as high as fourth place with “ON,” the lead track from “7” released in February. “Boy With Luv,” featuring American singer Halsey, peaked at No. 8 in April of 2019.

With 265,000 downloads sold (among its overall first-week total of 300,000, which includes its vinyl and cassette physical versions), “Dynamite” debuts with the biggest digital sales week since Sept. 16, 2017, when Taylor Swift’s “Look What You Made Me Do” launched with 353,000,” Billboard reported.

BTS celebrated the victory through social media in South Korea, where it was early Tuesday when the news broke. It also happened to be the birthday of BTS singer Jungkook.

“Congratulations on the Billboard No. 1 fellow members, I’m happy because of you guys,” BTS singer J-Hope wrote on the group’s official Twitter account.

J-Hope added, “And ARMY! You know that we love and thank you more than anyone. You deserve to be congratulated, too,” referring to the band’s global fans base referred to as ARMY.

The feat comes on the heels of BTS bagging four awards at the MTV Video Music Awards (VMA) — Best Pop, Best Group, Best Choreography and Best K-pop — on Sunday for “ON.”

With “ON,” BTS became the first Asian act to win Best Pop at the VMAs, out performing other nominated heavyweights, including the Jonas Brothers, Justin Bieber, Lady Gaga with Ariana Grande and Taylor Swift.

The global reaction to “Dynamite” could not have been bigger from the get-go, with the music video on YouTube attracting more than 3 million concurrent viewers at its premiere and garnering 101.1 million views in the first 24 hours, making the biggest music video debut on the platform to date.

On the streaming front, the band has also made history, becoming the first K-pop act to debut at No. 1 on Spotify’s Global Top 50 index. Not only did BTS become the first-ever K-pop artist to top Spotify’s main chart, but it also achieved the biggest Spotify song debut of the year so far.

The release of “Dynamite” happened almost serendipitously, with the song coming out amidst the group’s world tour and overseas publicity coming to a screeching halt due to the COVID-19 pandemic.

According to BTS leader RM, neither the group nor its label-management agency Big Hit Entertainment initially had plans to put out “Dynamite” as a stand-alone digital single. But the track’s brimming, vibrant energy ended up enchanting the septet enough for it to be released. Yonhap