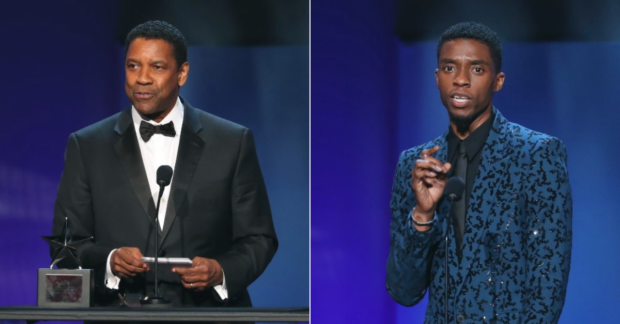 Denzel Washington (L) has been a helping hand in Chadwick Boseman’s (R) career that was cut short by the latter’s battle with cancer. Image: AFP/Jean-Baptiste Lacroix

Among the Hollywood stars who have paid tribute to Chadwick Boseman after he succumbed to cancer is Denzel Washington.

Washington praised the “Black Panther” star in a statement yesterday, Aug. 29: “He was a gentle soul and a brilliant artist, who will stay with us for eternity through his iconic performances over his short yet illustrious career.”

Washington had a special connection with Boseman: he paid for the latter’s schooling at the British American Drama Academy’s summer program at Oxford University.

Boseman took up directing in Howard University and enrolled in acting classes. One of his teachers was Phylicia Rashad (“The Cosby Show”) who encouraged students to study theater at the British American Drama Academy’s summer program at Oxford University.

When Boseman and his classmates could not afford the program, Rashad tapped celebrity friends to sponsor them. He revealed only in a February 2018 interview with Rolling Stone that his benefactor was Denzel Washington.

Boseman finally got to tell Washington about his act of kindness during a “Black Panther” premiere in New York, a story he recalled on the “Tonight Show” in March 2018. To which the “Training Day” star quipped, “Oh, that’s why I’m here! You owe me money!”

So, when Boseman said, “There is no ‘Black Panther’ without Denzel Washington,” he was also being literal.

One of the late actor’s last films was “Ma Rainey’s Black Bottom”, which is set in 1927 Chicago and is based on Pulitzer Prize winner August Wilson’s play. It also happens to be produced by Washington. Niña V. Guno/JB