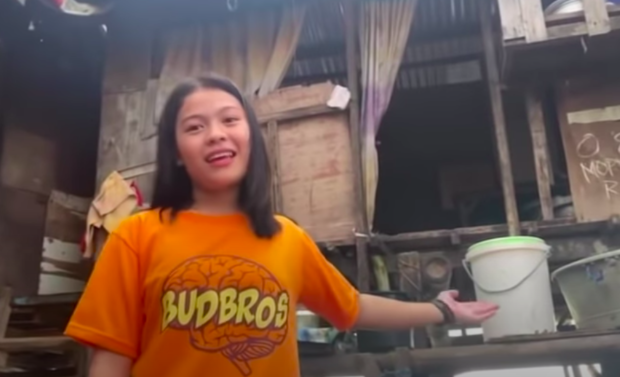 Lyca Gairanod takes fans on a tour of her old home. Image: screengrab from YouTube/Lyca Gairanod

Teen singer Lyca Gairanod became emotional as she took fans on a tour of her old home in Tanza, Cavite before she became the first-ever grand winner of “The Voice Kids” in 2014.

Gairanod took a dose of nostalgia as she visited her humble house in the province, as seen in her latest YouTube vlog uploaded yesterday, Aug. 24.

The 15-year-old singer was upbeat and playful throughout the visit as she recalled her old living conditions and joked around with her grandmother, who now occupies the shack. Despite her joyful attitude, however, Gairanod could not help but get emotional as she reminisced on her old life.

“Parang nami-miss mo, sobra ‘yung bahay na ‘to. Grabe, and dami nitong — na-experience nito sakin, and ang dami kong napagdaanan,” she said. (It is like you will always miss this house so much. Seriously, I have so many experiences here and I have gone through a lot in this house.)

(I went through a lot back then. You saw my story, I went on MMK before. Since I’ve gone to “The Voice”, I have gone through many hardships in my life.)

“So, dito na rin talaga ako lumaki and syempre, hindi ko kayang kalimutan ‘tong lugar na ‘to, kung saan ako nanggaling,” she added. (So, I really grew up here and I can never forget this place, where I came from.)

Gairanod, who obviously enjoyed returning to her old home, noted that she still wants to live there even now although she is really grateful for her much more comfortable life today.

She added that she has loved the house very much ever since, recalling that whenever there was a typhoon and they were forced to evacuate, she always cried for her little home.

(I do not want to lose this house because I love it very much and I cannot just leave it be. So, as long as this house can stand, it will stay here.)

She then asked her grandmother about their old life and the hardships that they have endured before she had her big break in singing.

(Lyca was poor back then. I raised her and now that she is grown up, this granddaughter of mine is the one who gave us a better life here. Like what I tell you, this house she gave to me, I shall die here… I stay here. I will not leave this house no matter who says so.)

An emotional Gairanod then explained that she really grew up by her grandmother’s side, noting that her mother was mostly working back then so that they would have something to eat.

Gairanod also disclosed to fans that she has already invited her grandmother to live with her in her new house back then, but she refused because she wanted to stay in the old house beside the beach.

By the end of the vlog, Gairanod also promised her grandmother that she will take care of the repairs needed for her home.

Gairanod was hailed as the grand winner of the 2014 run of “The Voice Kids”, besting Darren Espanto and Juan Karlos Labajo, who both now have successful music careers. JB