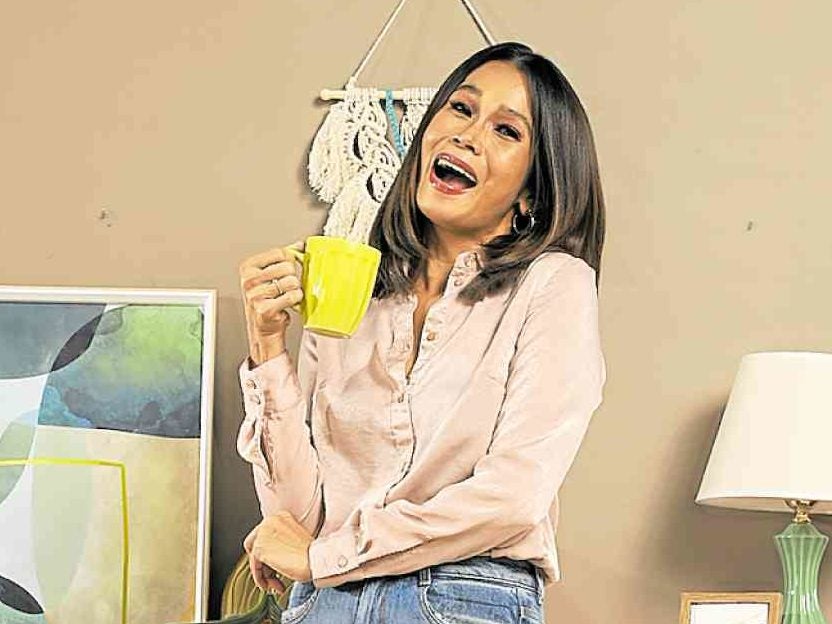 “I consider myself a front-liner, too,” declared comedienne-TV host Pokwang, who also said she could very well empathize with Filipinos who still opt to leave the house in order to earn a living despite the COVID-19 threat.

“Like me, they have families to take care of. They need to work even though, given a choice, they would rather stay at home. For us, going out of the house, despite the threat of contracting the virus, is unavoidable,” Pokwang said.

The government should continue giving aid if it wants its people to simply stay indoors, Pokwang pointed out. “Alalay ang kailangan. What do the people really need? Livelihood and protection from the virus. That’s what the government should focus on right now,” she told Inquirer Entertainment on Tuesday.

“It’s useless to keep on blaming each other for what’s happening,” she said, referring to the continuous rise of COVID-19 cases in the country. “We should be united in facing this. We should understand the needs of our neighbors and work on providing for those needs. And for those who have to leave their homes to work, please be responsible. Just remember that you might bring the virus to your own homes if you’re not careful.”

Before the enhanced community quarantine in March, Pokwang was already on her last three days of shooting for the Regal Films-produced comedy “Mommy Issues” by Jose Javier Reyes.

She had also been busy with her food business, called Poklee Food Products. However, the pandemic has forced her company to decrease production output. “I cook our products at home. But now, I can’t just let anyone in the house, especially because I have a 2-year-old daughter and an 80-year-old mother living with me. I had to send home most of my staff,” she pointed out.

The lockdown also had an effect on Pokwang emotionally. She admitted to feeling sad most of the time, and that she would even cry at night. “I got more depressed as the problem with ABS-CBN worsened.”

Pokwang, who is a mother to two girls, Ria Mae, 21, and Malia, 2, said she felt sad for her children, too. “Since they can’t get out, lumiit ang mundo nila. I had wanted for Malia to explore places,” she observed.

Pokwang said she eventually got over her anxiety, also with the help of her family. “Papang (actor Lee O’Brien) and my eldest (Ria Mae) would always tell me, ‘OK lang ’yan Mamang. You’re not the only one experiencing this. Let’s help each other overcome this,’” she recalled.

“I’m so lucky I have him (Lee) in my life. He took charge when he knew I was too sad to be productive. When it came to our business, he was really hands-on. I would just focus on cooking while he would really work on selling our products,” she shared with Inquirer Entertainment.

Pokwang said Lee was also hands-on in terms of taking care of their toddler. “Papang became her (Malia’s) teacher. He would teach her English, so I just became her disciplinarian,” Pokwang said, laughing.

Pokwang said she also felt grateful to her household staff. “I made most of them go home because they also needed to tend to their own kids. The only ones left with me are those assigned to take care of my mother and help me cook. I was so touched when they told me, ‘Ma’am, pwede mong bawasan ang sweldo namin.’ It’s because they know I really had no income at that time. May trabaho na ako ulit [ngayon].”

“I don’t have a contract with ABS-CBN anymore. The management understands that I also need to make a living. I’m not as rich as the Zobels and the Ayalas,” she said, laughing. “Right now, my contract is on a per-show basis.”

While Pokwang admitted that doing “Chika BESH” was mostly fun, she explained that there were also challenges. “Leaving the house to work every day is a struggle. I actually consider myself a front-liner. In order to bring happiness into every home, I risk own my health,” she pointed out.

Other challenges, Pokwang said, were not being able to hug the people she works with and cares about; and living up to the expectations of the program’s staff members who are “the ones working really hard for this show.”

To maintain a good relationship with her “Chika BESH” cohost, Pokwang said they have their group chat.

Asked to describe her coworkers in terms of personality and hosting skills, Pokwang replied: “I see potential in Ria, who is … a natural,” said Pokwang. “When we have millennials as guests (like actress Sofia Andres), she is able to relate. We also learn from her.”

As for Pauleen, Pokwang observed: “She has a lot of input because she is also a host of ‘Eat Bulaga!’ and a new mom.”