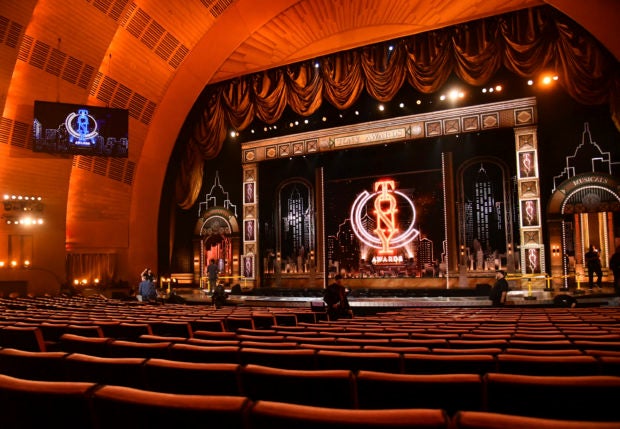 A view of the stage appears prior to the start of the 73rd annual Tony Awards at Radio City Music Hall in New York on June 9, 2019. Image: AP/Charles Sykes/Invision

NEW YORK — Despite being interrupted by the coronavirus pandemic, the shortened Broadway season will nonetheless have a Tony Awards.

Tony Award Productions said Friday that the celebration of live theater will be digital but offered no date or streaming platform. Final eligibility determinations will be made by the Tony Awards Administration Committee “in the coming days.”

Broadway theaters abruptly closed on March 12, knocking out all shows — including 16 that were still scheduled to open. Producers, citing health and city authorities, have three times extended the Broadway shutdown, currently until at least early January.

Only shows that officially opened are eligible for Tonys so the assumption is that shows that were still in previews when the shutdown order came will not be under consideration.

Some spring shows — like a musical about Michael Jackson and a revival of Neil Simon’s “Plaza Suite” starring Matthew Broderick and Sarah Jessica Parker — pushed their production to next year. But others abandoned their plans, including “Hangmen” and a revival of Edward Albee’s “Who’s Afraid of Virginia Woolf?”

“Though unprecedented events cut the Broadway season short, it was a year full of extraordinary work that deserves to be recognized,” according to a statement by the Broadway League and the American Theatre Wing, which present the annual Tonys.

“We are thrilled not only to have found a way to properly celebrate our artists’ incredible achievements this season, but also to be able to uplift the entire theater community and show the world what makes our Broadway family so special at this difficult time.” CL