Great entertainment at Martin-Pops concert, but why did Ai-Ai walk out? | Inquirer Entertainment
Close
menu
search

Great entertainment at Martin-Pops concert, but why did Ai-Ai walk out? 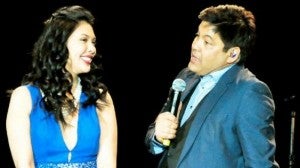 Martin Nievera and Pops Fernandez: Reunited and it felt so good. Photo by Elton Lugay

NEW JERSEY—Ludi de Asis Hughes, possibly the most prominent Filipina political fundraiser in New Jersey, was at front row clapping to the rhythm, tapping her feet and laughing at every campy joke dished out by Ai-Ai de las Alas.

She and thousands others turned out for the April 29 Martin Nievera-Pops Fernandez concert at Atlantic City’s Taj Mahal Casino, marking the musical comeback of the estranged couple.

A self-confessed “diehard Martin fan,” Hughes said she enjoyed herself immensely. “’Be my Lady’ is my favorite number in the show,” said the founder of the Asian-American Chamber of Commerce in New Jersey.

The “Three’s Company” concert, which set the mood for some faux flirting by the ex-spouses, was a success based on the Filipino-Americans who were there.

“Seeing Martin and Pops together was a special moment,” said Miguel Braganza, a director-choreographer. “Ai-Ai was a riot.”

Realtor Corazon Rivera who came with a dozen of her friends said she was touched by the couple’s “sweetness” on stage, reminiscent of a time in their youth when they were the Philippines’ top pop duo. “I was touched by what Pops has told of Martin that she can only remember the beautiful things her ex-husband and her have shared together. I admire her for saying that, it takes a lot of courage to say that,”

Pageant producer Danny Pagsambugan said the couple showed utmost professionalism on stage, and “didn’t have inhibitions cracking jokes about each other.”

While many may want to see them reunite in real life and create more beautiful music together, Martin shot down that thought, telling The FilAm, “Magkakabalikan kami only in concert.” Both are now married to other people, and Martin’s wife is not in showbiz.

The event was marred by Ai-Ai stomping out when security hustled her boyfriend out of the ballroom during a meet-and-greet. The circumstances were not clear, but this happened as the comic was

The security didn’t budge. The furious Ai-Ai slapped the table to everyone’s surprise, stood up and rushed to chase her man. Everyone thought it was part of an act, Ai-Ai known for her racy, often

off-color humor. Until Martin and Pops called for help and producer Anna Puno came out. Some 20 minutes later, all’s well and Ai-Ai was reunited with her boyfriend.

The musical numbers of Martin and Pops – duet and solo – brought back a lot of good memories for many FilAms in the audience, said Dennis Sy, who provided backup vocals. Songs like “Each Day With You,” “How Can I” and “Be My Lady” brought tears to some.

Martin and Pops “epitomize the best in world-caliber talent in the field of music and entertainment that the Philippines has to offer,” he said.

The concert was produced by Manila-based Star Media Entertainment, with Bing Gabriel of MPG Productions — a friend of Hughes — as line producer. It was directed by Vic Perez and Lorrie Ilustre, both from Los Angeles.