Four to go: Fil-Ams rally behind Jessica Sanchez to the end | Inquirer Entertainment

Four to go: Fil-Ams rally behind Jessica Sanchez to the end 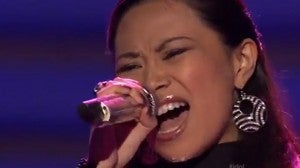 As “American Idol” season 11 nears the homestretch, Filipino-Americans continue to rally behind Filipino-Mexican Jessica Sanchez, as she sang her heart out in Thursday’s episode “British invasion” for a slot in the Fox reality singing competition’s Top 4 this week.

Filipino-American followers were all praises for Sanchez, who at 16 is the competition’s youngest finalist.

Performing two very different songs, Sanchez rocked it with Tina Turner’s “Proud Mary” and showed her soulful side in Joe Cocker’s “You Are So Beautiful,” once again drawing raves from the judges and fans.

“It’s like listening to an old soul,” actor Bernardo Bernardo, now based in the United States, told the Philippine Daily Inquirer. “She looks so innocent but there’s maturity and depth in the way she sang her songs. There’s such beauty in her voice.”

Bernardo, who has launched a social media campaign to garner more votes for Sanchez, said he included both the Philippine and Mexican flags in the flyer he designed and posted on Facebook “to also get support from the Mexican-American community.”

“She sang like a seasoned pro,” said Perez, who cast his vote online and via text many times over after watching Sanchez and the four other finalists perform songs from the ’60s in the first round and Brit pop in the second. “Her performance was so enchanting, so magical.”

“I am confident she will win,” said Minerva Cobilla, a city government worker who voted for Sanchez for the first time after hearing from friends that she nearly got the boot three weeks ago.

“I never really paid close attention to ‘American Idol’ until Jessica almost got eliminated,” she said. “I’m now more inspired to vote and I’m also asking others to show their support for her by voting.”

The “Idol” judges, though expressing mixed reactions on Sanchez’s song interpretations on Thursday, were once again impressed with her powerful pipes.

“You’re so grown-up there, it’s crazy,” Jennifer Lopez told the high school student from Chula Vista in San Diego County after her rendition of “Proud Mary.” “You were a little bit of Tina, a little Beyoncé.”

Randy Jackson thought Sanchez did not live up to Turner’s iconic performance of the song and said it was “barely OK,” but Lopez quickly defended her, saying they can’t compare a 16-year-old to Tina Turner.

Jackson, however, loved Sanchez’s take on “You Are So Beautiful.” “It’s so pro. People who have been singing 50 years can’t do this. Your talent level is unbelievable.”

Steven Tyler agreed. “You once again showed America just how beautiful your voice is and what a great singer you are. You’re gonna be No. 1, girl.”

In Washington, D.C., the Migrant Heritage Commission (MHC) said they were successful in getting both Filipino-American and Mexican-Americans to support Sanchez through social media,  phone calls and e-mail blasts.

“We got a lot of Mexican-Americans in our database who promise to support Jessica,” said Arnedo Valera, MHC coexecutive director. “We also gave them specific instructions on how to vote.”

The judges thought Joshua Ledet did a great job with his take on the Temptation’s “Ain’t Too Proud to Beg” and the Bee Gees’ “To Love Somebody.”

Skylar Laine continued to wow the judges with her performance of Creedence Clearwater Revival’s “Fortunate Son” and Dusty Springfield’s “You Don’t Have to Say You Love Me.”

Phillip Philips less than impressed with rocking The Box Tops’ “The Letter” and The Zombies’ “Time of the Season.”