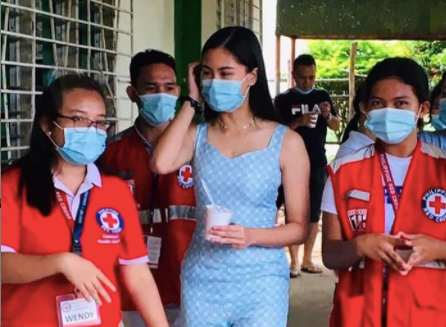 Kisses Delavin showed her support to citizens in Masbate who were affected by the 6.6 magnitude earthquake which hit it on Tuesday morning.

The actress and her parents went to an evacuation center in the municipality of Cataingan to comfort and help affected people in the area, as per Delavin’s talent agency All Access to Artists Inc.’s Instagram page last Tuesday, Aug. 18.

Delavin was accompanied by Philippine Red Cross (PRC) members, as seen in a series of photos. The actress interacted with the citizens while wearing a face mask and practicing social distancing.

A fan showed more snapshots of the “Pinoy Big Brother: Lucky 7” contestant’s surprise visit via Facebook on the same day.

The supporter named Gizelle Abejo Abaja called the actress the “Darling ng (of) Masbate” through a hashtag.

The earthquake left one citizen dead and 36 other people injured. The fatality was a resident of Barangay Alimango in Cataingan, PRC confirmed.

Cataingan is the epicenter of the 6.6-magnitude quake, which left several roads and other infrastructure damaged. A total of 200 aftershocks were also recorded in the province and its nearby provinces after the initial tremor. JB