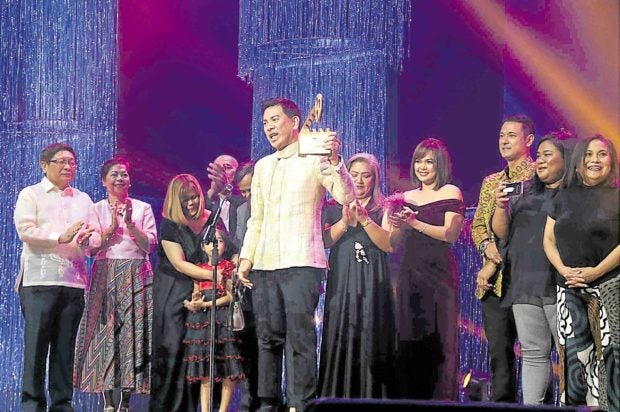 The Cannes-winning director (center) receiving one of “Mindanao’s” 11 awards at the 2019 MMFF awards rites. —CONTRIBUTED PHOTO

Brillante Ma Mendoza has been consistently putting the Philippines on the world cinema stage by producing films that cut across social and racial lines or tackle subject matter that reflect the ills and woes of society. But it isn’t often that you hear the acclaimed filmmaker speak out about contentious issues in public because, more often than not, he prefers to let his films do the talking.

But the Cannes-winning Filipino auteur has found an urgent matter worth talking about: The failure of cinema owners to disburse the producers’ slice of the box-office pie in the 46th edition of the Metro Manila Film Festival (MMFF), held from Dec. 25, 2019 to Jan. 7, 2020.

“I was very happy when my film ‘Mindanao’ was chosen to take part in the 2019 MMFF. I fought hard for its inclusion because I knew that its message would resonate well with moviegoers,” the director said. “Unfortunately, it’s already been almost eight months since the December festival began, and we have yet to get our share of the box office from the cinema owners.”

On the list of the box-office remittance provided to us by the people behind “Mindanao,” only 12.73 percent of what cinema owners owe them has been paid as of this writing. The Ayala Cinemas tops that list at 48 percent, followed by Cinema 2000 (Gateway, Newport, Shangri-La, etc.) at 22 percent, the independent circuit (Gaisano, Alnor, etc.) at 15 percent and SM Cinemas at 5 percent. On that list, Vista Mall/StarMall, Film Advisors (Powerplant, Greenhills, etc.) and Robinsons Movieworld have not paid any amount at all.

“Mali na ito, eh (this isn’t right anymore),” Brillante told us over FaceTime last Sunday. “Kawawa naman kaming maliliit na producers—we’re not like Viva Films, Star Cinema and other big production companies that can afford to make movies any time they want, even during the pandemic.”

What makes the complaint even more ironic is that it’s coming from the director of the film which got the lion’s share of the awards—11—during the festival’s awarding ceremonies, including best picture, best actress (for Judy Ann), best actor (Allen Dizon) and best director (for Brillante).

“This is not actually an MMFF or MMDA (the Metro Manila Development Authority, the group behind the festival) issue, but they’re indirectly connected to this because they’re the ones coordinating with cinema owners about anything related to the festival,” Brillante clarified. “And ‘Mindanao’ isn’t the only one having trouble collecting. I spoke to Coco (Martin, the lead star, director and producer of the festival’s third top grosser “Tripol Trobol: Huli Ka Balbon!”) and he told me his movie has yet to get everything it is owed.

“I understand how the pandemic has affected moviegoing in the country—the theaters have been closed since March—but they had that money since the festival wrapped up in January. The pandemic only began sometime late February and March.“And it’s not like ‘Mindanao’ made that much money—it earned just a little over P19 million. The last time I had an entry, which was long before the pandemic, we already got our share of the box-office pie for 2012’s ‘Thy Womb’ by February.

“As producer of ‘Mindanao,’ I won’t get all of the P19M it earned. Half of that goes to cinema owners—but before they give producers their share, they’ll get their cut first. Example, if the money involved is P100, the P50 I’d get would still be divided among the distributor, the local government (via the amusement tax) and the producer. “In ‘Mindanao’s’ case, of the P19M it earned, only about P6M will reach me. It’s saddening that Solar has only collected about P400,000 so far. Some cinema chains have not paid us a single cent.”

And speaking of more woes, Brillante also mentioned the amusement tax “Mindanao” has additionally been burdened with, despite getting a grade of A from the Cinema Evaluation Board (CEB) before it was shown at the festival.

“Remember, we got an A from the CEB,” he said. “So that means, hindi kami dapat kasama sa amusement tax—meaning, our arrangement with the cinemas should have been 50-50. But then, after ‘Mindanao’ got an A, a memorandum was released removing the tax [rebate]—which is not acceptable. This is unfair! Why did they rate my film in the first place? I had to spend around P25,000 just for the CEB to give it a grade. We should’ve already been exempted from this issue because the group agreed to rate it, right?”

“I’m not unreasonable. But my wait has been long enough. We were e-mailing most cinemas through our distributor (Solar Films), especially Robinsons, na talagang zero remittance, to no avail. Worse, we’ve been told by Robinsons to wait until sometime next year. This is already too much!

“As you can see, wala silang binibigay na pera sa distributor para bayaran kaming producers. They are ignoring us. Hindi ako pinapakinggan ng cinema owners kasi maliit na producer lang ako. So, I tried to call the MMDA/MMFF and asked for their help through the festival’s spokesperson, Noel Ferrer.

“In fact, if you remember, in December, all we did was beg them to keep ‘Mindanao’ in their theaters, because they were naturally prioritizing the entries with box-office appeal. Pati ba naman sa paniningil, nakikiusap pa rin kami? After the very long wait, halos wala pa rin kaming nakukuha?”

Asked how the MMDA/MMFF reacted to his request, Brillante said, “Well, [MMFF executive director] Atty. Rochelle Ona told us that they will coordinate with the cinema owners—parang ganun lang, because technically, they’re already out of this issue. 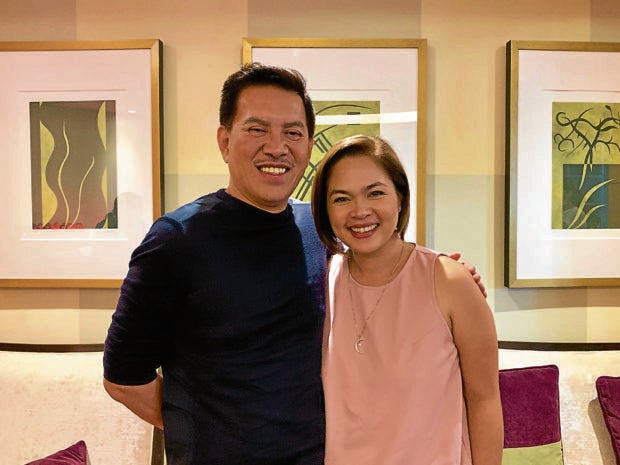 “But if you’re handling the festival, you’re expected to protect the interest of participating producers because something like this would certainly discourage other small and independent producers from participating in the MMFF if they have to hurdle this type of problem on top of all the challenges of making a film.”

“It’s ironic for the MMFF to have already announced two new batches of entries (first for the aborted summer iteration of the festival, then just last week, for the December fest this year), tapos hindi pa rin nari-remit ang kita ng producersfrom the 2019 MMFF. There’s something very wrong about that!

“If this can happen to me, what’s the guarantee that this won’t happen to other small producers? If they won’t protect me, it only shows that they’re really only after the money. When I make films like ‘Mindanao,’ I am aware of the risks because I know they’re not commercial, but I take the gamble just the same.

“But in situations like this, huwag naman nila kaming masyadong pagmukhaing talunan sa labanan. After all, what is P19M compared to the P600M that Aga Muhlach’s film ‘Miracle in Cell No. 7’ made at the box office?

“The cinema owners can’t just say they’re working from home because they can always transact through online banking—you don’t need a lot of manpower for that. Moreover, these companies are not small-time. That’s our money, we didn’t just grab that somewhere.”After the seven- or eight-month wait, why talk now?

“If I don’t talk about this in the open, they’ll do this again,” Brillante mused. “Apak-apakan ka lang. I’m being very open and transparent about this to let people realize the difficulty of making films like ‘Mindanao.’ It’s a big sacrifice. So, when something this frustrating happens, it doesn’t motivate filmmakers like me—at mas lalo pa kaming nababaon at nadi-discourage. It’s degrading!”

What was the budget of “Mindanao,” and how does Brillante expect to get his investment back?

“‘Mindanao’ earned a little over P19M, but we made it for P20M—lugi kami (laughs),” Brillante disclosed. For the film to get back its investment, it needs to make P50M. And for it to earn, it needs to take home P60M. If I get only P6M from its P19M haul at the box office, that means I will lose P14M from this film. “But I can sell the rights to my films in Europe and Southeast Asia, through my distributors in those areas—that’s where I get back my expenses. There are other platforms that can help me make money from this—there’s Netflix or HBO, etc. So, ‘yang P6M na ‘yan can double. You can’t rely on what you earn from the local market, even if you sell your rights to TV networks like ABS-CBN or GMA 7. I have to rely on what my films earn abroad to make sure I get back my capital.

“But they really should help encourage the country’s small producers and upcoming filmmakers. My career is the perfect example here: If I have not been able to establish myself internationally and didn’t have my own international distributors, I would have stopped doing this a long time ago. Commercially, ‘Mindanao’ has become my biggest and most successful film to date, so I find it ironic to have to go through these challenges.”

Inquirer Entertainment reached out to our source in SM Cinemas for comment about the reported nonpayment of the MMFF remittance, and she told us that she has forwarded our query to her teammates. At press time, SM has yet to issue a statement on the matter.

We also welcome the reactions of other cinema owners mentioned in this story, whom we are still trying to contact.

Last Sunday night, we also got in touch with the MMFF team of the MMDA, via its spokesperson Noel Ferrer, for its comment about this issue.

“Direk Dante (Brillante’s moniker) has personally talked to me about this, and I have relayed this concern to our MMFF executive director,” Noel told us through text. “And while the whole deal is really between the film distributors and the theater chains, we have already alerted the ones in charge of the theaters regarding this issue.

“After our talk, Ayala and the Solar team have gotten in touch with each other last week, and they’re already fixing the release of payments. We are awaiting the response of SM and Robinsons Cinemas, too.”

So, dear readers, we shall keep you posted. INQ