K-pop stars SuperM to return with debut album ‘Super One’ 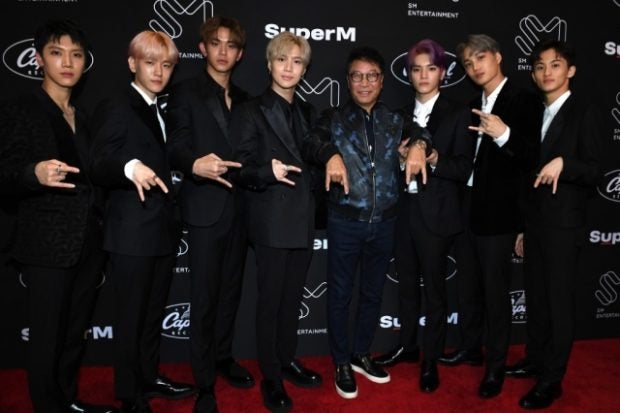 Members of K-pop supergroup SuperM pose with South Korean record producer Lee Soo-man (4th from the right) during a press conference at the Capitol Records Tower in Hollywood on October 3, 2019. Image: Valerie Macon/AFP

Baekhyun and his bandmates have announced their comeback with their debut studio album, “Super One”, which is slated for release on Sept. 25.

While details about the much-anticipated full-length are still scarce to this date, the seven-member K-pop band is planning on releasing a couple of promotional singles ahead of “Super One”.

“100” will be available on streaming platforms as soon as August 14, while “Tiger Inside” will arrive a few weeks later on September 1.

Time will tell if the K-pop boy band, who once rivaled all-star group BTS, will recreate the success of their self-titled debut EP with their forthcoming studio album, “Super One”.

At the time, SuperM became the first musical act from South Korea to top the revered ranking with their debut release.

SuperM was created in 2019 by SM Entertainment, and has culled its seven members from some of the Korean management company’s most popular groups. Among them are successful vocal outfits SHINee, EXO, NCT 127 and WayV.

While SuperM members have collectively sold more than 14 million album-equivalent units with their previous bands, they found an even larger following in the United States.

“There are a lot of groups out there and a lot of competition, but our goal is to make K-pop shine even brighter. The spirit of competition is not necessarily bad, because it pushes us to want to put out better things,” bandmate Taeyong once told Rolling Stones. NVG

WATCH: Jane De Leon releases own ‘How You Like That’ dance cover

Read Next
LOOK: Joseph Marco proudly reveals relationship with Russian model
EDITORS' PICK
Metro Manila posts lowest temperature yet this ‘amihan’ season at 19°C
Acer starts the year off strong with the Aspire Vero National Geographic Edition
Over 3 Million worth of prizes to be won at Smart Padala’s SENDali Manalo Promo!
Gear up and get ready to play with Yamaha Mio Gear
DOH: 28,471 new COVID-19 cases in PH; active cases now 284,458
On Day 2 of implementation, gov’t says workers now exempt from ‘no vax, no ride’ policy
MOST READ
Lucky plants to grow in 2022
Derek Ramsay on being married to Ellen Adarna: ‘Gumaan ‘yung mundo ko’
Cristalle Belo on raising her kids in Australia: ‘We set limits’
Unvaccinated has rights but also has limits—DOJ
Don't miss out on the latest news and information.