Lockdown love and turmoil in ‘Unlocked’

PH anthology, shot on iPhone, is now the most watched series in the history of LGBTQ streaming platform GagOOLala
By: Rito P. Asilo - Entertainment Editor
Philippine Daily Inquirer / 12:20 AM August 09, 2020 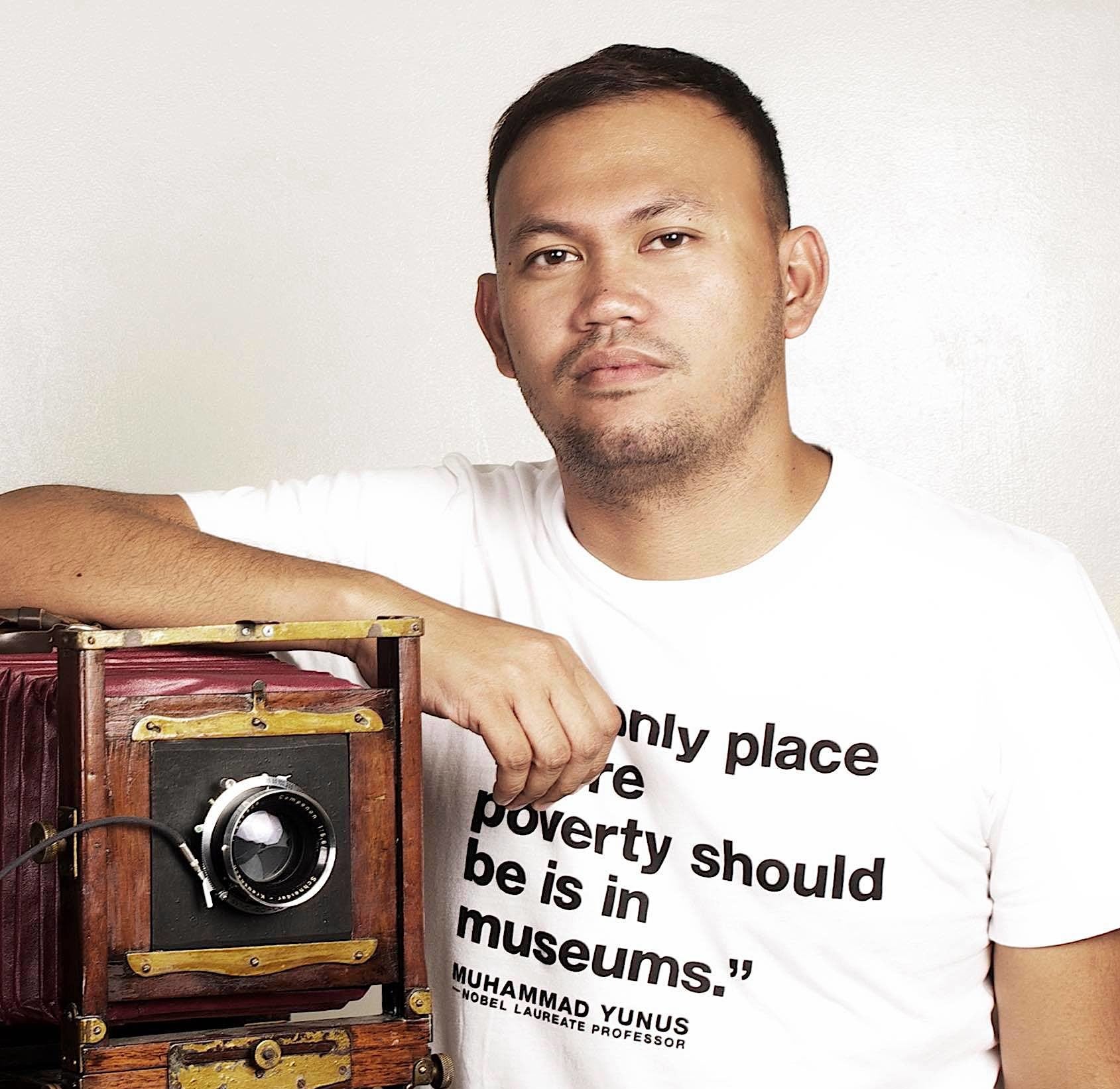 The characters depicted in Adolf Alix Jr.’s LGBTQ+-themed anthology series “Unlocked” on the streaming platfoorm GagaOOLala (Gagaoolala.com) reflect a variety of queer relationships that jumps out of the screen and resonates with viewers.

That’s not just paying lip service, mind you. In fact, “Andrew & Brix,” the first of the six-part series that premiered on July 9, starring Markki Stroem as a lonely gay man in the midst of a bitter breakup and Mike Liwag as the cash-strapped sex worker he hires during the long lockdown in Manila, quickly became the most-watched series in the four-year-old, Taipei-based, Portico Media-owned video-on-demand streaming service specializing in LGBTQ+ content.

“When director Adolfo Alix Jr. pitched the series to us, we immediately realized the resonance it would have with our members in the Philippines, Asia and around the world,” GagaOOLala international coordinator Jaime Costas Nicolás told Inquirer Entertainment recently. “In many places, the LGBTQ+ community is still forced to hide their relationships or live a double life, and the quarantine has jeopardized their status quo in many cases.” 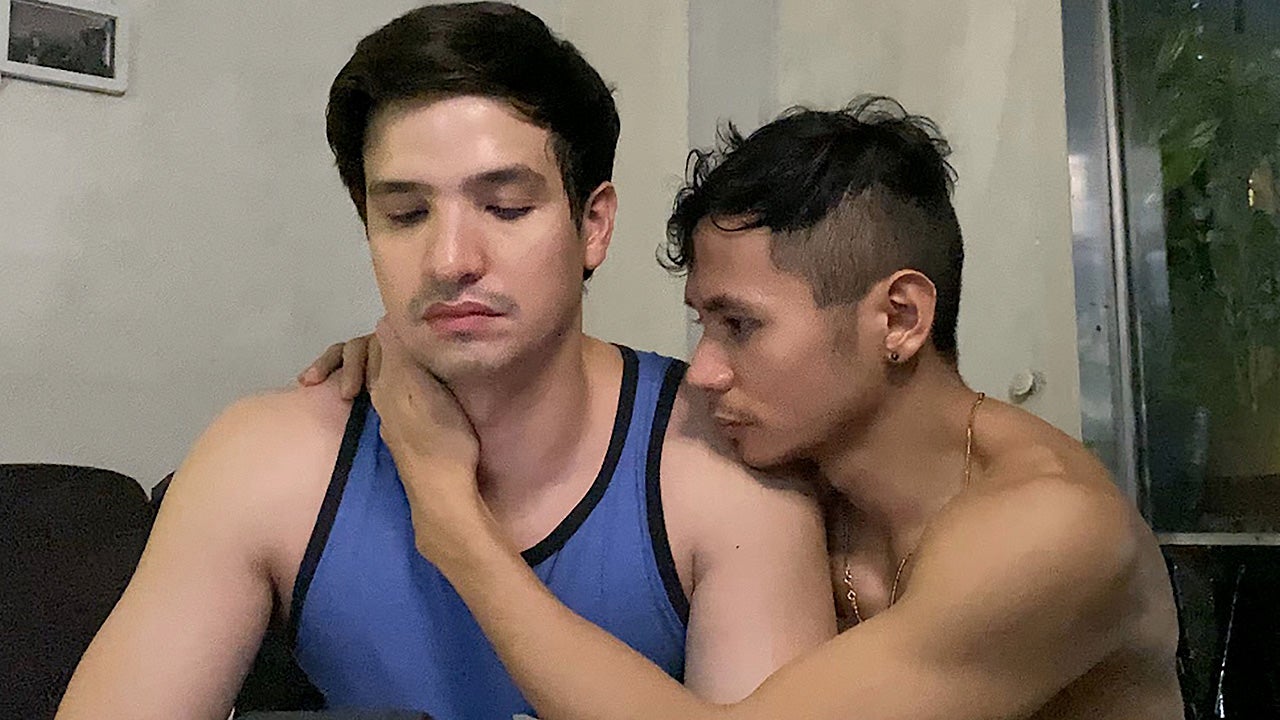 Sharing these stories was the major lure for Adolf because, as he explained, what his protagonists go through “is universal, regardless of gender orientation.”

Moreover, Portico Media, the group behind GagaOOLala, knows these stories are not only specific to Manila—which probably explains why “Unlocked” became as popular as it is following the release of its first episode.

“‘Unlocked’ has become GagaOOLala’s most watched series, with viewers from Thailand, Taiwan, US, Canada and Latin America. Adolf introduced the idea of love as the link that would connect all the episodes in this anthology.

“There is family love, romantic love, long-distance love… Even though the show utilizes a realistic and bittersweet tone, it is especially important to showcase the strength of our connections with loved ones in these troubled times. That is a message we wanted to put front and center on GagaOOLala.”

The six-part anthology also mirrors the atmosphere of uncertainty pervading during the pandemic. With lives upended and held hostage by the quarantine, people become more vulnerable to the stressors around them—from the limited mobility and work-related stress to the complex relationships they have with their partners, family or friends.

“The issue of love is universal,” Adolf said when asked about how he came up with the series. “During the early days of the quaranvtine in Manila, I had LGBTQ friends who were trying to understand the ‘new normal’ as they navigated the realities of the pandemic. So, I thought of developing stories wherein the pandemic can be an inciting circumstance to examine their relationships, like a purgation of sorts—be it the physical distance or the developing paranoia over the situation.

“They become more vulnerable to the stressors around them. Now that they have more time with their loved ones and locked in the confines of a limited space, emotions and realities are unlocked which test their relationships for better or for worse.

“They confront the fear of not only contracting the virus, but also the sense of uncertainty, as much of the times as their relationships. I talked to Jerome Zamora, who wrote most of the episodes to help expand the ideas for the series.”

Asked about the most challenging logistical issues he faced during production, Adolf said, “Safety was our priority. We’re a small crew of four, and we shot all episodes using an iPhone. We used our office and my place for some of the locations to ensure safety. We sanitized the place before the start of the shoot and observed social distancing.

For the more intimate sequences, we asked the actors about their level of comfort in doing the scenes and decided to mount them with that in mind. We shot in one day per episode, unless there are Zoom elements that need to be incorporated into the story.”

Given the limitations of the shoot during the lockdown, some of the episodes, while riveting and relatable, are rough around the edges—which makes them smolder even more with thematic pertinence.

While the stories are framed by the realities of the LGBTQ+ experience, the accessible issues they tackle go beyond their niche market. 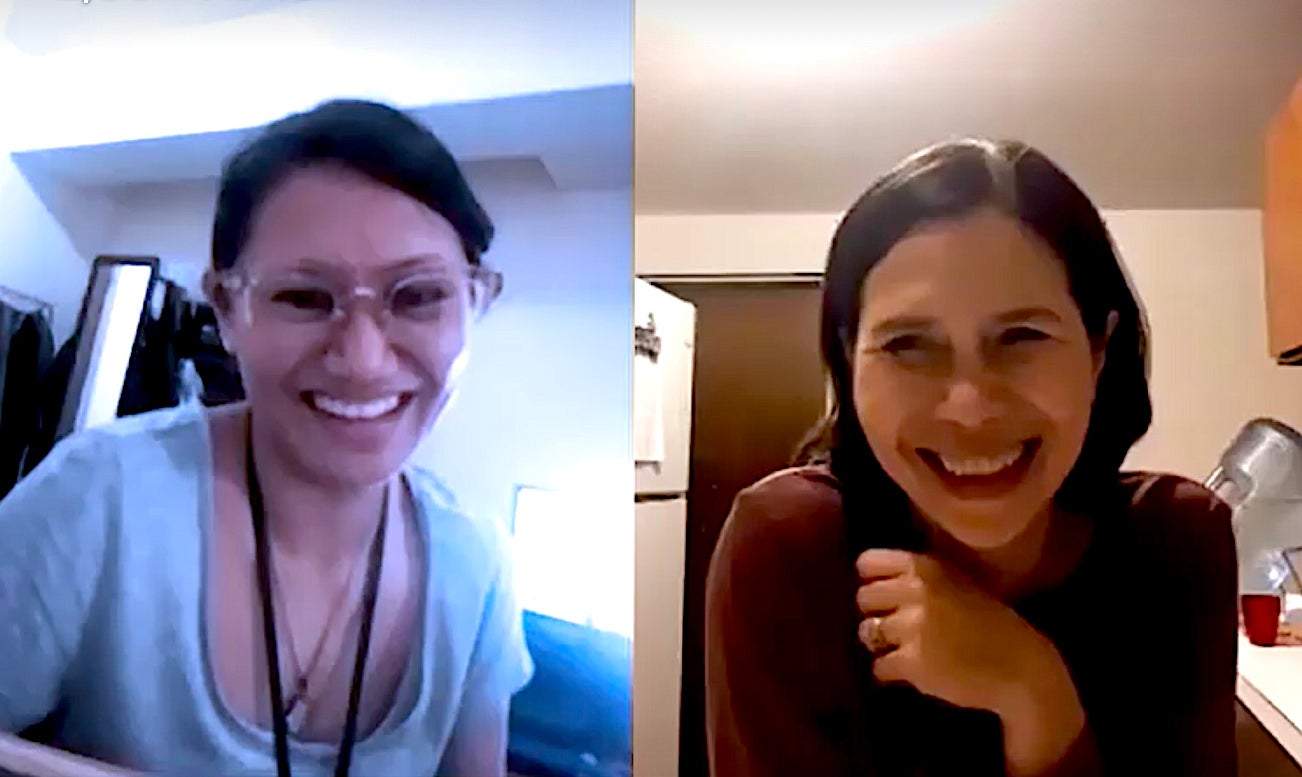 Take “Frankie & Eli,” the episode featuring the terrific Angeli Bayani cast as single parent Frankie, who’s worried sick about the daughter she hasn’t seen in two months. Her only source of solace is her lesbian lover Eli (Angelina Kanapi), an overseas Filipino healthcare provider who works in a COVID-19-stricken nursing home in Seattle.

Keeping Frankie sane in the midst of her worries are her fleeting but soul-soothing webcam conversations with Eli—a flickering light at the end of her long tunnel. But she has yet to tell her former husband about her newfound love and long-distance romance with Eli.

For Angeli, who’s at her most radiant here, it was easy to relate to Frankie’s fears and anxiety attacks because she also had to endure the early part of the lockdown without her son and partner beside her. More than that, she said, the episode has a tale that is right up her alley.

“It’s always fulfilling to tell a good story, and one that tackles LDRs (long-distance relationships) and LGBTQ themes,” Angeli explained. “I am grateful to our director and to GagaOOLala for the opportunity.”

In Markki’s case, the dashing actor said it wasn’t hard to tap into his character Andrew’s dilemma. “For starters, I could relate to Andrew’s fear of being alone during the crisis,” he said. 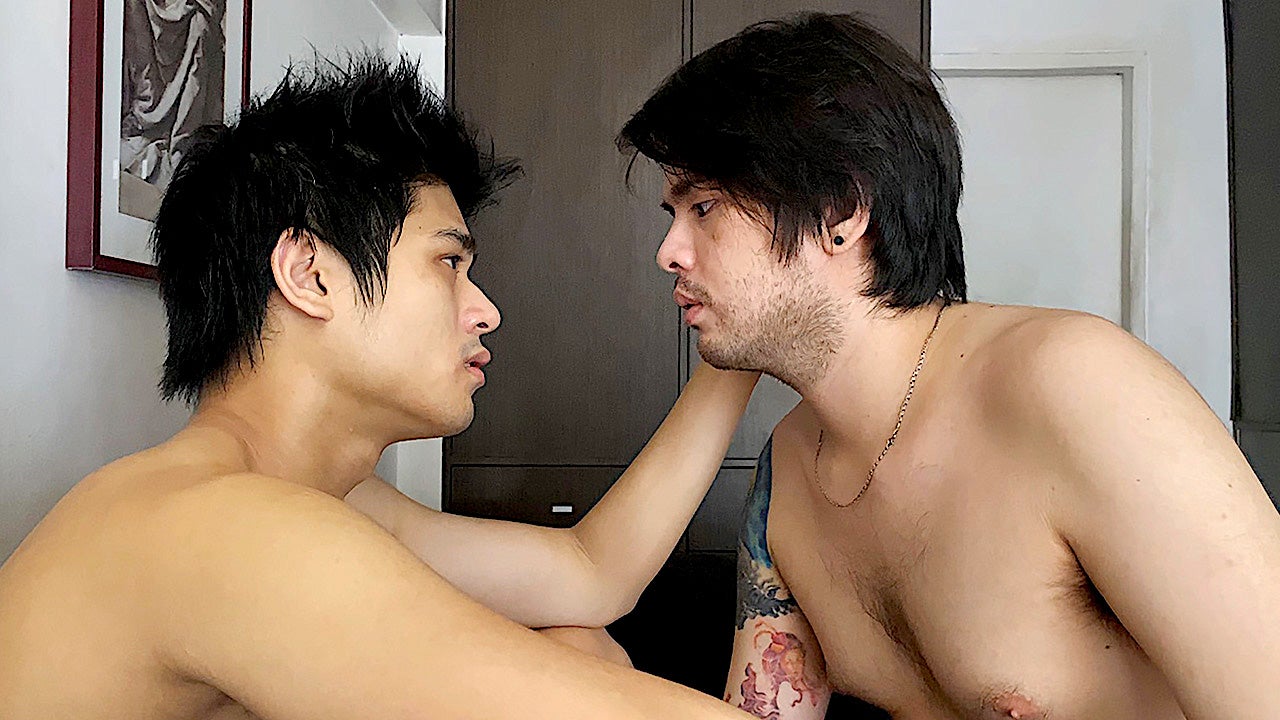 In “Calvin & Drake,” the titular characters, portrayed with convincing aplomb by Oliver Aquino (“Tale of the Lost Boys,” “Jino to Mari”) and Miguel Almendras (Junjun of the popular BL series “Hello, Stranger”) are forced to learn good and less-than-appealing things about each other as their increasingly toxic relationship unravels during the lockdown.

The other fascinating pairs in the series include those of Evelyn Vargas and Gold Aceron (exceptional in his award-winning portrayal of a hermaphrodite in “Metamorphosis”) in “Ivan & Jack,” while Ross Pesigan shares the spotlight with Joel Saracho in “Greg & Harold.”

We asked some of the series’ cast members to weigh in on their experience shooting their respective episodes in “Unlocked”:

How did your character’s situation resonate with you? How similar are you to him/her?

Angeli Bayani (AB): Frankie and I are both single mothers. Like Frankie, I was also alone for some time during the ECQ because my son was with my aunt and my partner was with his family. Both Frankie and I had trouble sleeping, and I forced myself to find little things to do every day to deal with the anxiety. I also have family in the US; my aunt there is a nurse and everyone here worries about her and her family.

Markki Stroem (MS): With the looming fear of Covid-19 during the start of the pandemic I could relate to my character Andrew’s fear of being alone during the crisis. I have also tried to seek solace in partners that I didn’t necessarily feel an attachment to, just to get over someone.

It also takes a lot for me to get over someone, that is why I’ve been single for two years, so that I can learn to live with myself and grow as a human being—which is where, I believe, Andrew will go on, as well, on his personal journey.

Mike Liwag (ML): Brix and I may have similarities and differences. I am a bit conservative because I grew up in a traditional family. We’re both sensitive and are willing to do everything for our loved ones. But while I have limits, Brix has none.

Miguel Almendras (MA): What resonated with me was seeing Drake stuck in uncertainty. Like him, I found myself irritable and impatient toward a lot of things during this pandemic. I get easily annoyed by mundane things, but there’s really something deeper that triggers such outbursts. As a result, the simplest of arguments are blown out of proportion. 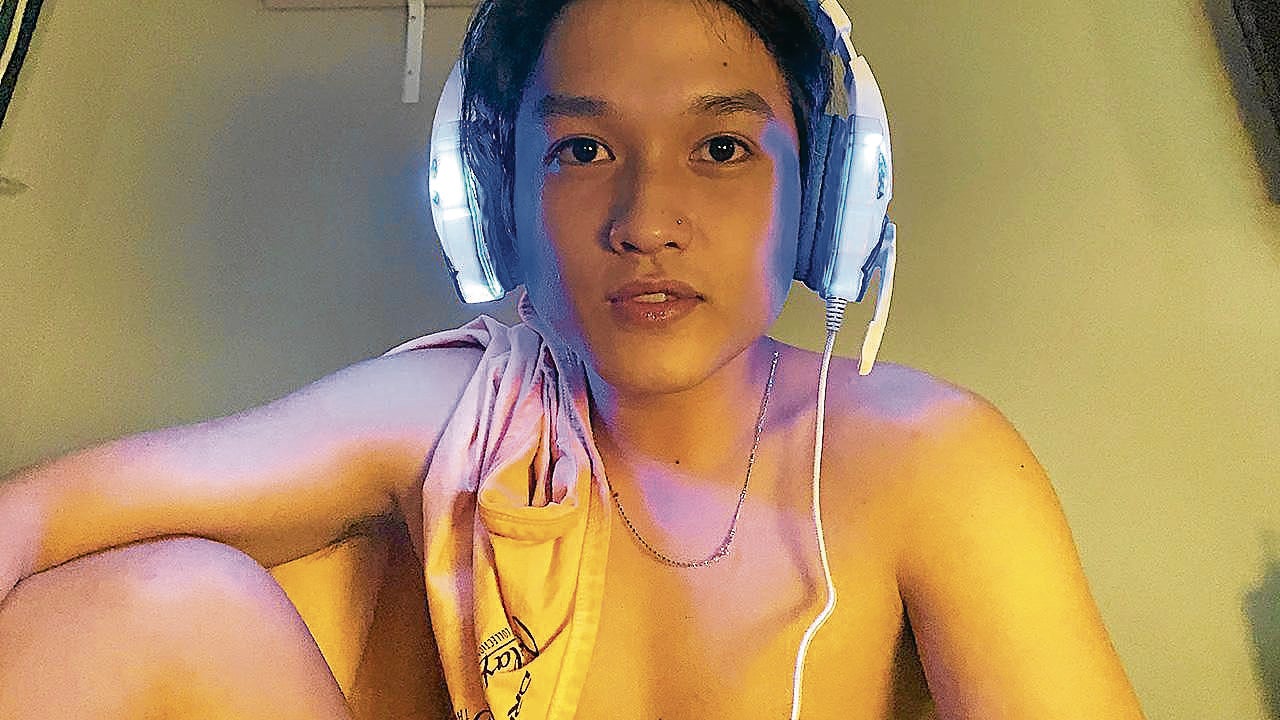 Gold Aceron (GA): In my episode, I play Ivan, who’s actually very different from me. But we’re both outgoing, independent and hardworking. Like him, I will do everything for the people I love, even if it hurts me!

What did you find most appealing about taking part in “Unlocked”?

AB: I appreciated that we were able to make a good film with just our webcams and smartphones. I was very concerned about going back to work during the pandemic, afraid for my little family’s safety.

But this anthology has given all of us an opportunity, not only to work and be productive, but also to do it safely and in peace. The best part was, I was able to do it with friends—that way, I was able to reconnect with Angelina. The story itself was an added bonus.

MS: During my time alone, while stuck at home during GCQ, I always pondered about filming something that took place during the pandemic. Since we’re all experiencing the turmoil it has caused, I wanted to release what I was feeling through art.

I also believe that the journey of the LGBTQ community is not all sunshine and rainbows. There are a lot of experiences that are locked away in memories and experiences. The “Unlocked” anthology opens up our world to the trials and tribulations of a community, already repressed by society, and how they triumphantly overcome them.

ML: This was new to me. Although I’ve done some plays that tackled LGBT issues, namely “Laro” and “Under My Skin,” “Unlocked” is particularly memorable because Direk Adolf, Markki and I did it during GCQ and the pandemic.

MA: I was intrigued by the format, as well as the themes of the other episodes. The anthology is significant because it managed to integrate the characters’ struggles into the series. The fact that it’s going to be streamed in a platform outside the Philippines is also appealing to me—that way, these stories could reach more viewers. It’s too good an opportunity to pass up.

GA: During the lockdown, people have been introduced to and entertained by different BL (boys’ love) series. I loved the challenge this role presented to me as an actor. But I believe many viewers would reach certain realizations about life after watching the episodes.