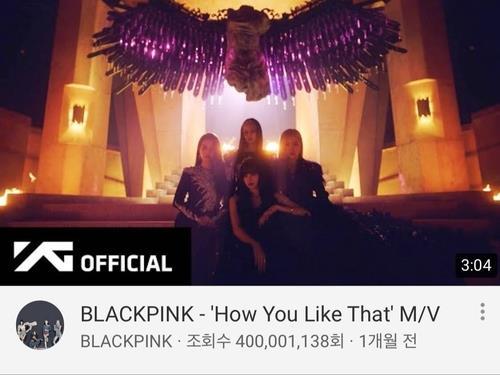 BLACKPINK “How You Like That.” YG Entertainment via The Korea Herald/Asia News Network

SEOUL — The music video for BLACKPINK’s hit song “How You Like That” topped the milestone of 400 million YouTube views Sunday.

The music video surpassed the threshold only 43 days after its release on Sept. 26.

The feat makes it the fastest to reach the mark among all K-pop music videos on YouTube. The previous record was by “Kill This Love,” another hit by the four-member act, which took 63 days to garner the view total.

“How You Like That” is the first of two pre-release singles that will become part of BLACKPINK’s first studio album, coming out on Oct. 28.

The second single will be rolled out on Aug. 28, the group’s management agency YG Entertainment said.