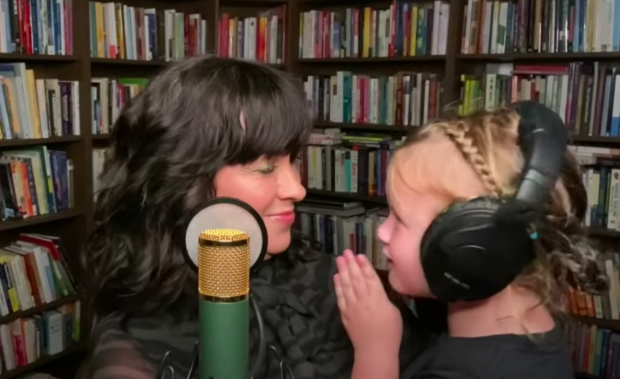 Alanis Morissette treated fans with a live performance of her new song “Ablaze”, which she sang with a special collaboration with her adorable young daughter, no less.

“Ablaze”, from her new album “Such Pretty Forks in the Road”, debuted on live television through “The Tonight Show Starring Jimmy Fallon” last July 31.

The quarantined performance was filled with giggles and sweet bonding moments between the doting mother and the 4-year-old Onyx as fans heard the song for the first time.

At one point, Morissette asked her daughter, “Is it too loud?”, to which Onyx replied, “It’s okay!” before the artist jumped right back to singing.

The playful Onyx also interrupted Morissette several times throughout the performance: one time by putting her hand over her mother’s mouth, and in numerous times by suddenly asking Morissette about the song’s lyrics, among others.

“My mission is to keep the light in your eyes ablaze,” Morissette vows in “Ablaze”, which the singer-songwriter fittingly dedicates to her children.

“Such Pretty Forks in the Road”, which was released on July 31, is Morissette’s first album in eight years, following 2012’s “Havoc and Bright Lights”. JB

Read Next
Hans Zimmer, Dave team up for new ‘Planet Earth’ documentary
EDITORS' PICK
Omicron now shows up in 90% of samples sequenced – Duque
4.7 million Filipinos have received booster shots, but that’s still a ‘low’ number – Galvez
‘Not yet the end’: Lawyer says Marcos Jr’s DQ cases to take lengthy process
Over 3 Million worth of prizes to be won at Smart Padala’s SENDali Manalo Promo!
Acer starts the year off strong with the Aspire Vero National Geographic Edition
The best of bayside and city living at SMDC’s Sail Residences
MOST READ
When to get boosters after positive COVID test
In Batanes, octogenarian dies of COVID-19
Duterte asks: ‘Is COVID-19 airborne?’ Duque blames spread on ‘token compliance’ with rules
NBI foils escape attempt of Kerwin Espinosa, two others
Follow @IBiongINQ on Twitter
Don't miss out on the latest news and information.