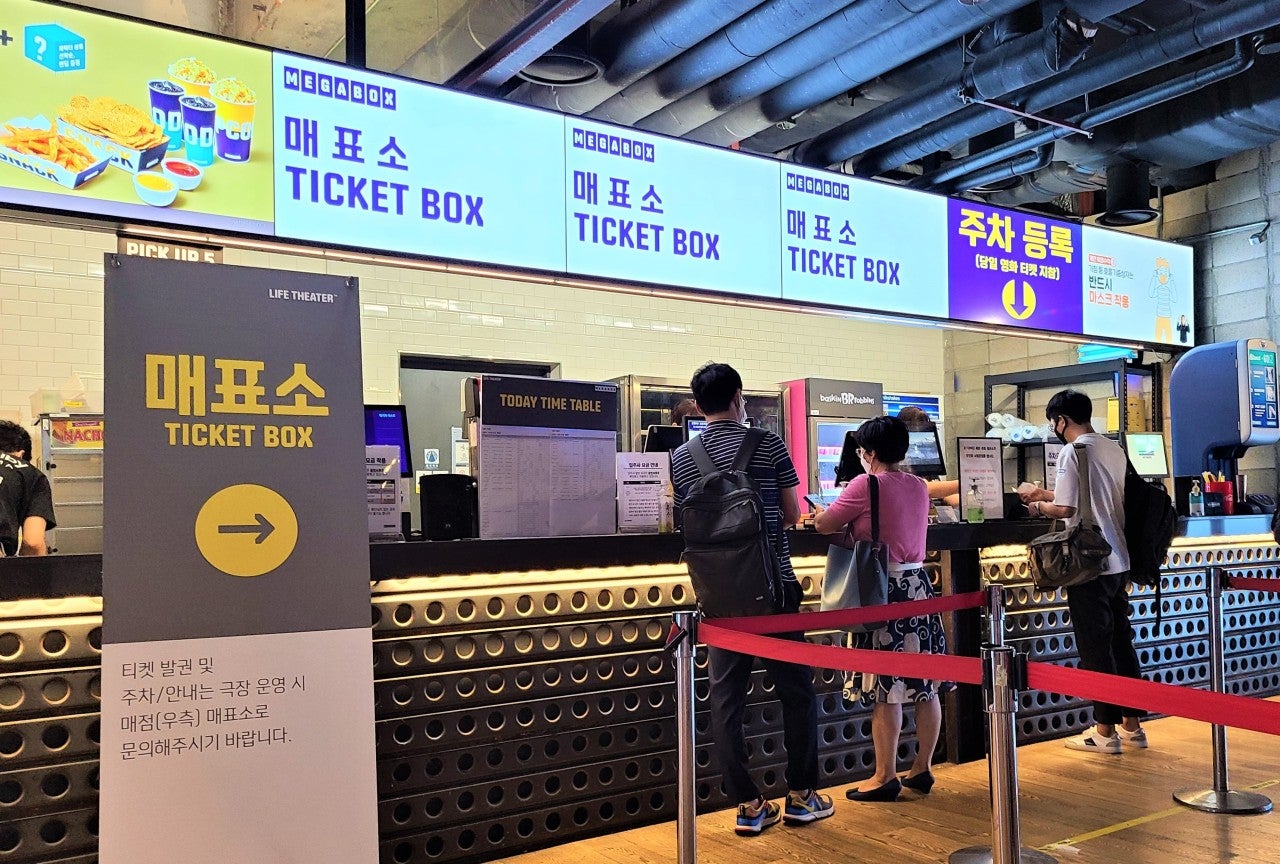 People wait in front of the ticket box at the Megabox Coex branch in Seoul on Monday. (Choi Ji-won/The Korea Herald)

SEOUL — Blockbuster action flick “Steel Rain 2” has racked up 1 million admissions in less than a week, following the lead of zombie thriller “Peninsula,” which kicked off the summer movie season amid the ongoing COVID-19 pandemic.

“Steel Rain 2” surpassed the mark of 1 million on Sunday, according to the state-run Korean Film Council, five days after its opening on July 29. The film is expected to be in a close race with action thriller “Deliver Us From Evil,” slated to hit local cinemas Wednesday. The upcoming film stars Hwang Jung-min and Lee Jung-jae, and is currently topping real-time ticket reservations.

With tentpole films from major distributors towing the box office, recent months have seen a steady rise in the number of cinemagoers, rising from an all-time monthly low of 972,000 in April to 5.62 million in July with the start of the peak summer season.

Although the numbers have shown a steep upward climb, cinemas are far from their old normal. According to KOFIC data, the overall number of moviegoers in the first half of this year plummeted by 70.3 percent compared to the same period last year. Although July’s figure stood at the highest since the fallout from COVID-19, the figure was an all-time low box office number for July since the agency started compiling such data in 2004.

“Most people are still wary of activities in public spaces due to the COVID-19 situation. Although big titles are opening, we’re still very cautious in promoting films and ushering in people to the cinemas,” head of CGV’s communications team Hwang Jae-hyeon told The Korea Herald.

The lack of foreign summer blockbusters that typically pull in large audience figures is another factor contributing to the slow recovery. Four of the most popular films in July last year were all from Hollywood: “Spider-Man: Far From Home,” “The Lion King,” “Aladdin” and “Toy Story 4.”

“In the case of this summer, although the local distributors are starting to release their tentpole films, most of the highly anticipated foreign film releases have been canceled or postponed indefinitely. The absence of such films that can attract moviegoers is considerable,” a public relations official from Lotte Cinema said.

Yet cinema operators have higher hopes for August.

“With ‘Deliver Us From Evil’ as a start, we have at least one new Korean film opening every week this month, and on Aug. 26, Christopher Nolan’s ‘Tenet’ will hit theaters. We anticipate ticket sales to recover to up to at least 50 percent of the same period last year,” Hwang added.