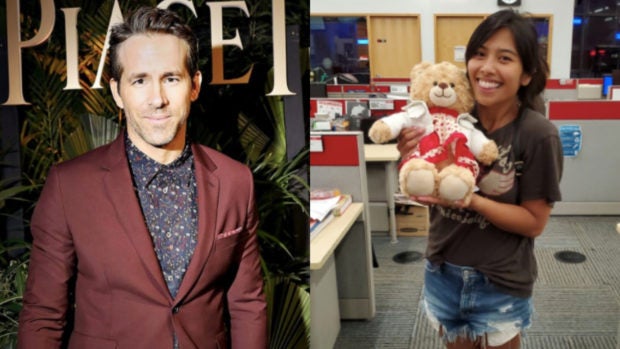 After the unique teddy bear of a Filipina was returned to her without any damage, “Deadpool” star Ryan Reynolds thanked everyone “who searched high and low” to get the stuffed toy back home safely.

Reynolds previously appealed to his 16 million followers on Twitter for the safe return of 28-year-old Mara Soriano’s teddy bear. Last week, the Filipina artist living in Vancouver, Canada, lost one of her last memories of her late mother who died from cancer in 2019.

The teddy bear contains a voice recording of Soriano’s mother stating in Filipino that she loves her daughter. Reynolds offered a $5,000 cash reward to anyone who could return the stuffed toy back to Soriano last Sunday, July 26.

Three days later, the teddy bear was reunited with its owner.

“To the person who took the bear, thanks for keeping it safe,” Reynolds said, retweeting Soriano’s announcement about the teddy bear on his Twitter page yesterday, July 29.

In happier news… thank you everyone who searched high and low. To the person who took the bear, thanks for keeping it safe. Vancouver is awesome. #FoundMarasBear https://t.co/X7FlyiR89P

Speaking about how it was returned to her possession, Soriano said that it was given back by two Good Samaritans in a safe space.

Her mother’s voice is still inside the teddy bear, she confirmed, and that there was not a single scratch on it.

Soriano’s backpack, which contained several important documents, gadgets and the special teddy bear, was stolen from her on July 24. She was moving into a new apartment with her fiance when someone took the bag while it was momentarily left unattended.

The Filipina did not specify if her other items were returned along with the stuffed bear. NVG

Ryan Reynolds offers $5,000 to anyone who can return Filipina’s stolen teddy bear