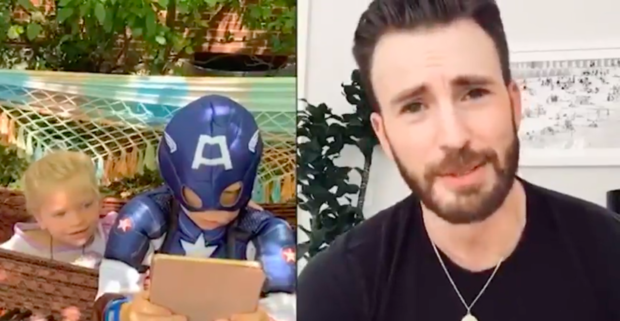 After a 6-year-old boy risked his life to protect her younger sister from an attacking dog, some “Avengers” stars have been reaching out to honor his heroic deed.

“Captain America” star Chris Evans pledged to give Bridger Walker an authentic Captain America shield, while “Spider-Man” actor Tom Holland invited the boy to visit him on set when they start shooting “Spider-Man 3.”

The boy stood between his sister and a charging dog on July 9. After getting bitten several times in the face and head, he grabbed his sister and they ran to safety. The incident earned him over 90 stitches on his face. His story was shared to others by his aunt Nikki Walker on her Instagram account last Sunday, July 12.

The dog’s owners have also reached out and assisted Bridger and his family. The aunt said that the dog owner’s family was “nothing but kind” to them and there was no resentment, only “an increase of love.”

After the aunt’s post became viral and has reached multiple Hollywood celebrities, Nikki posted more details about the family and the incident yesterday, July 16, on Bridger’s parents’ request.

Bridger and her 4-year-old sister were visiting a friend when his sister went to their friend’s backyard. According to the two kids’ recollection of the event, a “mean” dog ran after them. He went in front of his sister and kept on moving so that the dog would not go past him.

It was then that the dog attacked and latched on to Bridger’s cheek. He instructed his sister to run and after the dog released him, he led her to a more secure part of the yard. At that point, the dog’s owners were able to restrain the dog and they were able to call for help.

When Bridger’s father asked the boy why he shielded his sister from the dog, the boy said, “If someone had to die, I thought it should be me.” The boy had to undergo a two-hour procedure involving pulling his face and scalp back together, to treat his injuries.

The dog, a 1-year-old German Shepherd, has been “put to sleep” by its owners after the incident.

Mark Ruffalo, who played Bruce Banner and the Hulk in “The Avengers,” responded to the aunt’s post on July 12, commending Bridger for his bravery.

“People who put the well beings of others in front of themselves are the most heroic and thoughtful people I know,” Ruffalo said. “I truly respect and admire your courage and your heart.”

“You are more of man than many, many I have seen or known,” he added. 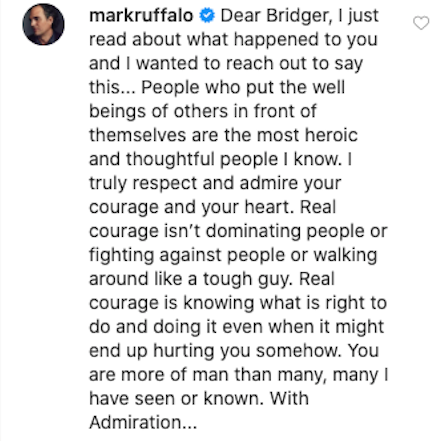 Evans likewise prepared a special video message for Bridger, as seen on the aunt’s post yesterday. Dressed in a Captain America costume, Bridger watched the actor’s message through a tablet.

“Keep being the man you are, we need people like you,” Evans said. “Recovering might be tough but based on what I’ve seen, I don’t think there’s much that can slow you down.”

The boy appeared to be excited about his new gift. “You can take it wherever you go!” his sister exclaimed.

Bridger also had a brief conversation with Holland, during which they talked about the boy’s favorite Avenger, Spider-Man, and his favorite film, “Spider-Man: Homecoming.” The aunt uploaded Holland and Bridger’s interaction today, July 17.

The Hollywood star then invited Bridger to the set of “Spider-Man 3” to see the suit up close and hang out, as Holland’s special guest.