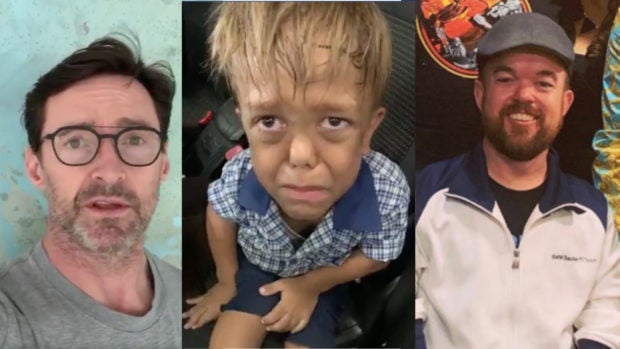 More and more celebrities from Hollywood are reaching out to a 9-year-old Australian kid with dwarfism who was bullied by his peers for being different. American comedian Brad Williams offered to take the child to Disneyland, while Hugh Jackman assured the child that the actor is now officially his new friend.

A concerned mother, Yarraka Bayles, called for the awareness of bullying’s impact on young children on her Facebook account last Wednesday, Feb. 19, after seeing her son in tears and begging her to take his life. Bayles captured the defeated image of her son Quaden on video while sitting in the car in Australia.

Bayles was apparently picking Quaden up from school when she spotted her son with another student patting him on the head and making fun of his height. To prevent his mother from making a scene, Quaden rushed to the car and said he wanted to go home.

“This is the impact of bullying!” the mother said in her post. “I seriously don’t know what else to do!”

Quaden’s tears were flowing from his eyes while he asked his mother for a knife to kill himself.

“I want people to know — parents, educators, teachers, this is the effect that bullying has,” the mother narrated in the video. “So can you please educate your children, your families, your friends because all it takes is for one more instant, and you wonder why kids are killing themselves.”

The 9-year-old sobbed while uttering the words, “I want someone to kill me.”

The mother continued that her son only wishes to have a normal education, but every single day another round of bullying and name-calling occurs.

Bayles also emphasized how bullying is affecting her child and their family. She said that they could no longer keep the discrimination Quaden experiences in private after everything he has been through when they go out in public.

“We tried to be as strong and positive as possible and only share the highlights, but this is how bullying affects a nine-year-old kid,” Bayles said.

Quaden’s mom also revealed that the child has tried taking his own life several times, which pushes her to keep an extra eye on him. The mother is also trying to seek some advice as she feels helpless about the situation despite calling the school about the incident.

“I feel like I’m failing as a parent,” Bayles confessed.

Quaden’s mother also said that she will keep making videos similar to her post to raise more awareness in the hopes that they do not have to lose another child due to suicide.

This is the impacts of bullying! I seriously don’t know what else to do! 😭

Stand-up comedian Brad Williams who also suffers from achondroplasia has already made the effort to reach out to Quaden and his family by beginning a GoFund me page for the child yesterday.

The comedian said he wanted to remind Quaden, and other people suffering from bullying, “that there is good in the world and they are worthy of it.” Any excess amount would also be donated to anti-bullying or anti-abuse charities, according to the post.

“I want to fly Quaden and his mother to America, get them a nice hotel, and bring them to Disneyland,” Williams said on the page.

“This is the best of humanity. I promise every penny donated will be put to good use,” he said. “It will go to help Quaden and to make sure no child goes through what he went through.”

Over $100,000! This is the best of humanity. I promise every penny donated will be put to good use. It will go to help Quaden and to make sure no child goes through what he went through. YOU ALL ARE AMAZING! pic.twitter.com/BdQxK19Swx

One of the actors who expressed his support is Hugh Jackman. Jackman sent a message to Quaden on his Twitter account today, Feb. 21, as a response to a post by one @LokelaniHiga urging Jackman and Chris Hemsworth to lift Quaden’s spirits.

The “X-Men” Wolverine star promised the child, “You’ve got a friend in me,” in his post.

“Quaden, you’re stronger than you know,” he added in the video.

“Everyone let’s please be kind to each other. Bullying is not okay. Period. Life is hard enough,” Jackman stated. “Let’s just remember, every person in front of us is facing some kind of battle so let’s just be kind.” /ra