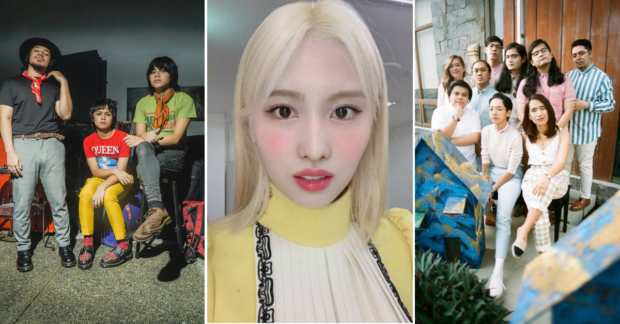 Twice’s Momo (center) gave a listen to IV of Spades and Ben&Ben during a live stream. Image: Facebook/@IVOFSPADES, Instagram/@twicetagram, Facebook/@BenAndBenMusic

It seems K-pop stars have been returning the love from their loyal Filipino fans as they tune in to music from local artists.

After folk-pop band Ben&Ben trended in a South Korean music chart this week, their song was played in an Instagram live stream of Momo, who is part of K-pop girl group Twice.

Momo played the song “Leaves” at the recommendation of fans, and once Ben&Ben caught wind of the news, they thanked Momo on social media yesterday, July 25.

yo thank you for listening to leaves momo! @JYPETWICE https://t.co/rUP6xCnxC8

During the live stream, Momo was joined by another Twice member, Sana, and they both listened to IV of Spade’s “Come Inside of My Heart” after a fan recommended it.

In a @JYPETWICE VLive with Momo and Sana. (regards to Nayeon). A Filo Once recommended to play Come Inside of my Heart by @IVOFSPADES.

Ben&Ben gained attention in Korea this week after members of K-pop groups gave them recognition. NCT’s Mark Lee played “Leaves” during a live stream while Young K from Day6 called the song “really good” on Twitter.

SB19 in new high at top 3 of Billboard Social 50, after BTS and EXO