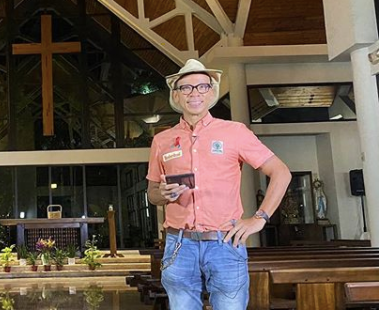 TV host and weather anchor Kim Atienza dismissed rumors circulating around the web that he was involved in a shooting incident and in critical condition.

“I am very much alive and still working,” Atienza declared via Instagram yesterday, July 16. “Kahit walang franchise (Even without a franchise).” The Kapamilya host was allegedly shot in his house, according to several posts. The incident was supposedly captured on surveillance footage as well.

“Thank you for all who called to check on me,” Atienza said. “I tried to pass this off and be quiet but my friends and family are worried. I have to address this fake news item now.”

Atienza added that ABS-CBN’s flagship news program “TV Patrol” was “still on air” despite the denial of the media giant’s franchise renewal in Congress on July 11. The program transitioned to YouTube, Facebook and other online streaming platforms after the media company was ordered to stop broadcasting on May 5, a day after its franchise expired.

His fellow anchor Gretchen Fullido called out the people spreading the misinformation about Atienza’s well-being on her Twitter page on the same day.

“DO NOT believe everything you hear or see on social media. It’s NOT JOKE, guys,” Fullido said. “People are going through so much. Please show some respect [and] compassion.”

BUHAY PO SI KUYA KIM! Guys there’s FAKE NEWS circulating that @kuyakim_atienza was shot & is dying. That is NOT TRUE. DO NOT believe everything you hear or see on social media. It’s NOT JOKE, guys. People are going through so much.Please show some respect & compassion. God bless pic.twitter.com/1bVADl2UOa

The TV network’s bid for another 25-year franchise was rejected after the technical working group’s report recommending the denial of ABS-CBN’s franchise application got 70 affirmative votes from lawmakers.

The decision left 11,000 employees at risk of losing their jobs. After failing to acquire a new franchise, the network said that it will begin retrenching employees by the end of August.  /ra