Forget his ‘Beast’—Dan Stevens steals ‘Eurovision’ as ‘Lion of Love’

LOS ANGELES—Forget him as the “Beast” in “Beauty and the Beast.” Or as Matthew Crawley in “Downton Abbey.”

As Russian singer Alexander Lemtov crooning that he’s the “Lion of Love,” Dan Stevens steals “Eurovision Song Contest: The Story of Fire Saga.” Will Ferrell and Rachel McAdams no doubt fuel the basic appeal of Netflix’s hit film that parodies the world’s most popular song competition.

But it’s Dan, with his George Michael do, hypersexualized wardrobe and overconfident bravado, who is winning the hearts of viewers in the film directed by David Dobkin. Playing a filthy rich performer, the British actor hilariously embodies the over-the-top spirit of the music contest.

Dan seals it in his big moment on the finals night when he pompously sings his pop aria, “Lion of Love,” where he exaggerates the high notes, accompanied by four shirtless male dancers in gold lamé pants. “Yes, it’s a very funny title for a very funny song,” Dan said.

Tapping his seductive good looks, the mustachioed Dan winks (literally in some instances) his way through the lyrics. Sample gems: “I was happy laying ’round in the shadows unbothered by flies/Surrounded by so many that just didn’t light my fire.”

“There were a few different inspirations, certainly,” said Dan in our video call. The 37-year-old actor was smiling with pink, yes, pink clouds behind him.

“I’m in the clouds in Los Angeles, California,” he explained. “Just having fun with my green screen. I thought it was more exciting than just a plain old green screen.”

It was a perfect backdrop for the actor and his scene-stealing portrayal of a brocade-wearing singer who does not take advantage of Rachel’s Sigrit when they spend the night together. Instead, Sigrit wakes up to find that Dan’s Alexander did not sleep, but braided her hair for six hours.

“The wardrobe was inspired by a lot of Eurovision performers, but Philipp Kirkorov from Russia, in particular,” added Dan about his inspirations for the role. “I think we just pinched a couple of his outfits wholesale. It was a tremendous amount of fun. I was having the time of my life.”

He added, “Eurovision is such a glorious competition. It’s very funny to introduce it to North America and to make people aware that one of the biggest TV events on the planet takes place off their shores.

“To get the privilege of playing somebody who’s described as the favorite of the competition, and somebody who clearly knows that and enjoys that status was a tremendous privilege. And it was so much fun to get to work with Will and Rachel.”

Laughing, Dan said he does not remember being in a romantic rivalry situation like his character, Sigrit and Will’s Lars do in “Eurovision…” “It’s always been fairly organic for me—meeting and falling in love,” said the actor who is married to jazz singer and singing teacher Susie Hariet, with whom he has three kids.

He stressed, “It’s interesting getting to play a character who has, on the surface, a performative confidence which a lot of people can relate to, where they have a persona that they can embody, that actually runs counter to what they are in real life. They’re a little shyer in their personal life. So, it was fun to get to play with that dichotomy.” 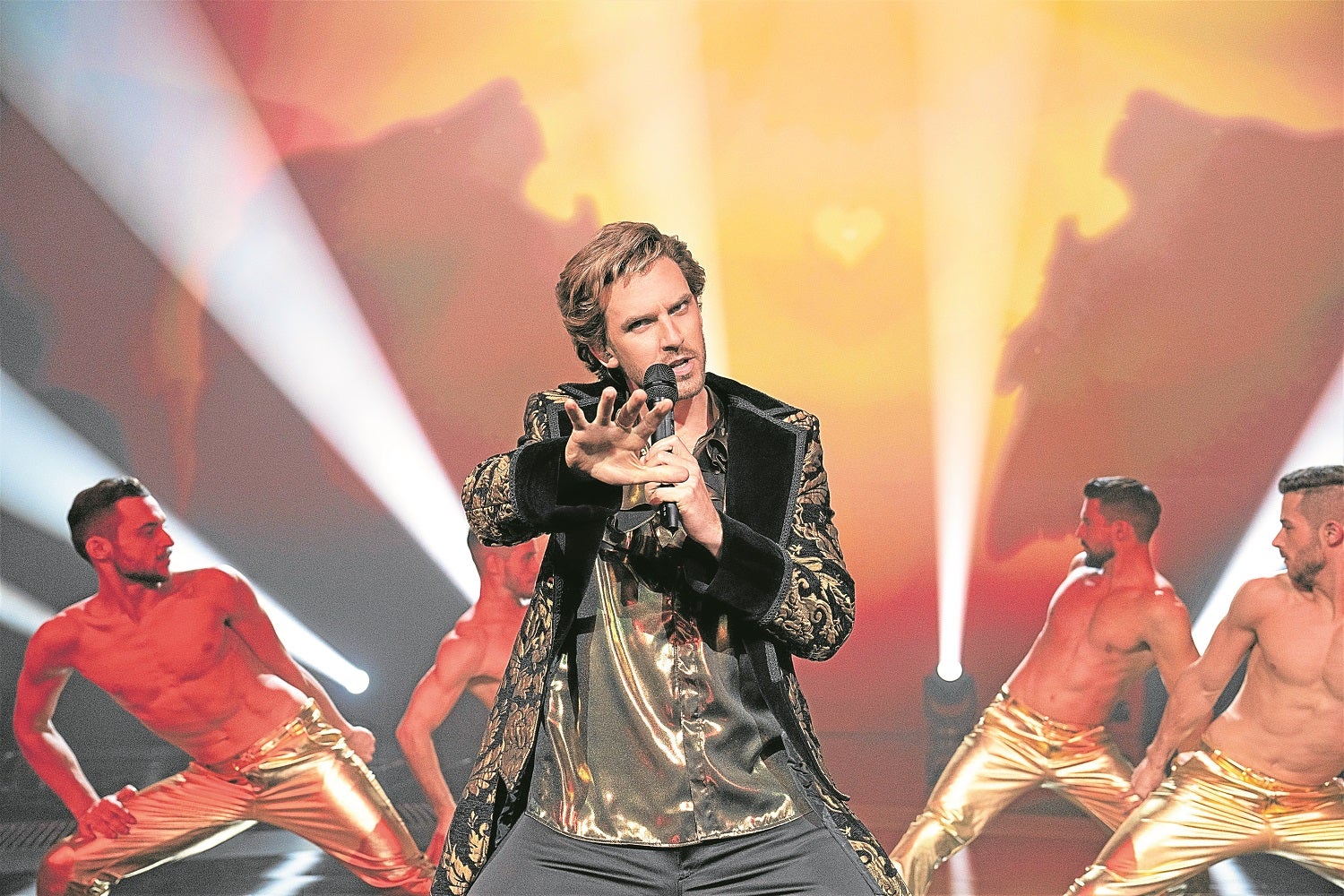 Dan explained his take on Alexander: “What was interesting to me was he was a bit more of a complex character than he actually appeared. The fact that he wasn’t a straight-up villain who was there to steal Sigrit away, that actually, for all of his exterior bravado, there was this tragic personal story line in his background.

“Obviously it’s a big silly musical comedy, but to be able to lace a small piece of truth in there and have that rooted in something real, gave the character something appealing to me. The Eurovision world is such a fun one to inhabit. I’ve been watching it since I was a child. And it really was extraordinary to step into that world.”

On whether his singing voice was used in those grandstanding moments where his Alexander extended those high notes, singing “loooooooove” and “roooooooar,” Dan replied, “I did.”

But the actor, who really sang as the Beast in Disney’s live-action remake of its animated classic, quickly clarified, “Unfortunately, we didn’t get to record the final version. But I was singing away there. Thanks to films like ‘Bohemian Rhapsody’ and ‘Rocketman,’ we’ve been able to use a similar technology that Rami Malek used to meld voices and achieve things. So, it’s really delightful and funny to get to embody a character that has the voice, like Lemtov.”

The plan was for Dan’s vocals to be blended with those of Eric Mjönes, a Swedish singer. Then, Dan was supposed to record “Lion of Love,” but the coronavirus lockdown was enforced. That made it impossible for Dan to go to a studio and record the pop aria.

Too bad because Dan’s wife was helping him train to belt the pop-operatic anthem. “For this movie, ‘Beauty and the Beast’ and other things,” Dan credited Susie for the singing preparation. “So I’ve been enjoying getting back into musicals and particularly, musical comedy. It was just such a treat.”

The Emmanuel College, Cambridge-educated actor said he has not met Russian mega pop star Philipp Kirkorov, his inspiration for the character.

“But he did reach out the other day,” Dan shared. “He said he and his family watched the movie, and they loved it. And I believe the movie has done very well in Russia, which is very funny.”

On working with Will, who also wrote the screenplay, Dan replied, “We had a lot of fun just improvising and playing, particularly, with the physical scenes. To be the recipient of a Will Ferrell freak-out fight scene is a great badge of honor.”

Already, people are clamoring to see Alexander again. “There have been mentions of sequels,” Dan acknowledged. “I don’t know what form that would take, but I think there’s life in Lemtov yet, for sure.”

In the meantime, Dan stars as Charlie in something completely different, a horror film by debuting director Dave Franco. Alison Brie—Dave’s wife—Jovani Ridler and Toby Huss costar in IFC Films’ “The Rental,” about how two couples rent an Airbnb vacation home for a celebratory weekend that turns into a nightmare. 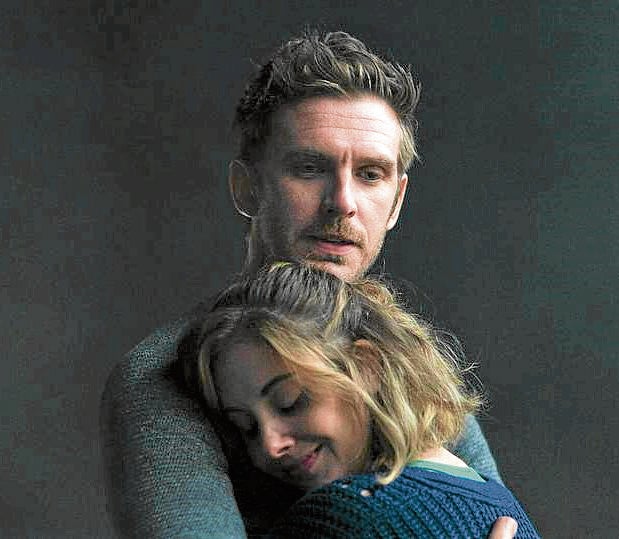 “What was interesting was Dave was very keen to play with the audience with their expectations—to have Charlie appear to be quite an upstanding character at the beginning,” Dan said of Dave, who also cowrote the script. “There are various tension setups. There’s quite an interesting arc there.”

Charlie and Alexander are interesting additions to Dan’s memorable characters, which include his David Haller in the TV series, “Legion.”

But for many of his followers, especially those in Japan, Dan is still beloved for his portrayal of Matthew Crawley, the heir to the title of Earl of Grantham in “Downton Abbey.” “It has been a fan favorite for a long time,” Dan confirmed.

“It’s a big part of my career and it’s amazing that it’s been so beloved all over the world, especially in Japan. But yeah, somebody made me a doll of Matthew Crawley, a little wooden figurine. I’ve had all sorts of lovely gifts.”

He will be seen next in an adaptation of Noel Coward’s “Blithe Spirit.”

“We had great fun filming that in England last summer just before I shot ‘Eurovision,’” Dan said of the comedy-fantasy-romance. “That’s with Judi Dench, Isla Fisher and Leslie Mann. It was directed by Edward Hall who is the son of Sir Peter Hall, who gave me my first West End theater job with Judi doing ‘Hay Fever’ at the Haymarket over 14 years ago, probably.

“So, there’s a lovely circularity to being asked by his son to do an adaptation of ‘Blithe Spirit’ and amazing to get to work with Judi in a role that she’d never played before. It’s fantastic to get to translate that comedy to a modern audience.”

As for being one of the actors who could be the next James Bond, Dan grinned as he quipped, “I think a Bond villain might be more fun.” Dan as an 007 villain with a touch of Alexander Lemtov? We can only hope.