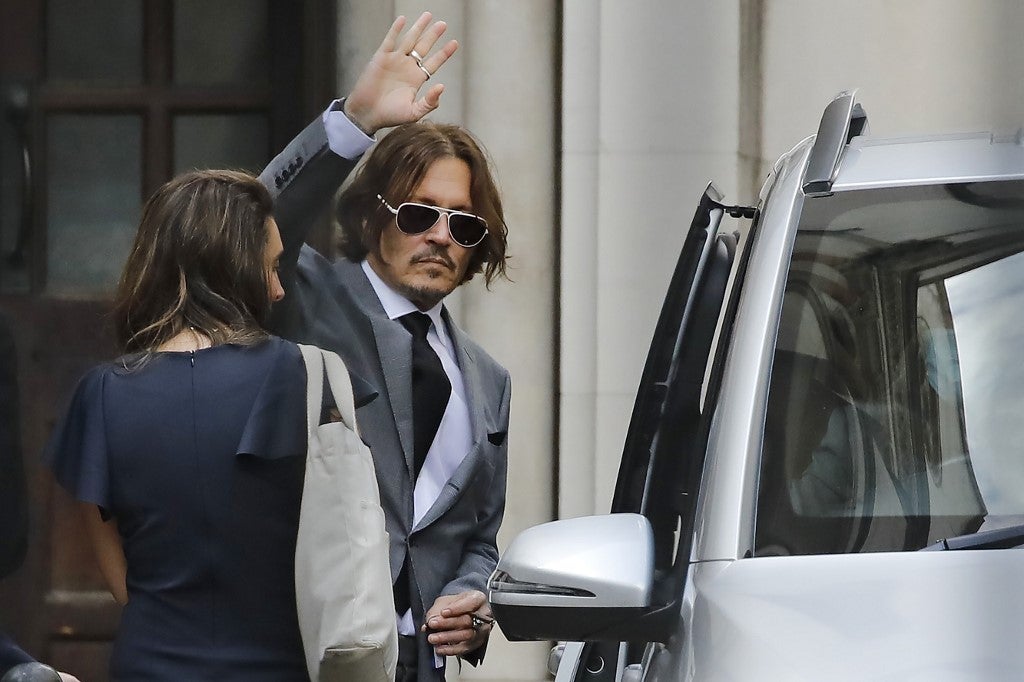 US actor Johnny Depp waves as he leaves after the fifth day of his libel trial against News Group Newspapers (NGN), at the High Court in London, on July 13, 2020. – Depp is suing the publishers of The Sun and the author of the article for the claims that called him a “wife-beater” in April 2018. (Photo by Tolga AKMEN / AFP)

Hollywood star Johnny Depp wrapped up five days of grueling testimony Monday in a libel trial that has exposed the dark underbelly of the lifestyles of the rich and famous.

The “Pirates of the Caribbean” franchise hero is suing the publisher and executive editor of Britain’s The Sun tabloid newspaper over a 2018 story branding him a “wife beater.”

The 57-year-old denies abusing actress Amber Heard — now 34 and the global face of French cosmetics firm L’Oreal — during a rocky two-year marriage that ended in a messy 2017 divorce and several lawsuits.

But he has admitted a debilitating drug habit and allowed the defense to air graphic details of 14 assault allegations that made headlines around the world.

Some legal experts following the High Court hearing in London question why Depp decided to put himself through the three-week ordeal given the subject matter being aired.

“To expose (difficult divorces) to forensic examination is the height of stupidity or hubris.”

Here are the main points that have emerged from the trial so far.

Hollywood’s drug culture has provided the backdrop for the entire hearing.

Depp told the court on Friday that he snorted cocaine to help break his addiction to painkillers.

He argued Thursday that he was suffering from withdrawal while coming off of drugs and was in “no physical condition”to hurt Heard during one alleged incident on his private Bahamas island.

Depp further explained the party drug ecstasy had little effect on him and that he preferred to leave it to Heard and their celebrity friends.

The actress herself was alleged to have sent a party invitation with instructions: “Bring some food, booze and drug of choice, yey!”

“Amber Turd” began trending on Twitter after Depp spent a part of Friday trying to explain how a large stool ended up in the couple’s bed in 2016.

Both of them were alleged to have been involved in extramarital affairs at the time and Depp claimed it was left there as revenge by either Heard or one of her friends on her 30th birthday.

Depp called the defense’s claim that it was from one of their dogs “physically impossible” because it was simply too big.

“There were jokes like ‘Amber Turd’, ‘Amber in the dumps’ going on,” defense attorney Sasha Wass told Depp sternly.

Depp professed his innocence and called the incident a “mystery”.

One of the darkest episodes involves an allegedly high and drunk Depp scrawling messages to Heard on a mirror and wall with the blood of his severed finger.

Depp acknowledges dipping the finger in a can of paint to continue writing once the bleeding stopped.

But he denies tripping on ecstasy at the time and claims Heard slashed off the tip of his finger with a bottle during a particularly bad fight.

The defense says he hurt it while “completely destroying” the couple’s vacation home in Australia.
Depp said Thursday that he was experiencing “some kind of breakdown” and was feeling suicidal at the time.

Mark Stephens said both Depp and Heard had plenty to lose and little to gain from the proceedings.

“His reputation will be permanently stained if he is found to be abusive.”

And “if Heard is not to be believed, she will find it very hard to find work in Hollywood”.

British libel law puts the burden of proof on the defense and gives Depp the initial advantage.

But the judge told Heard her upcoming testimony would not be bound by “confidentiality restrictions” agreed in the divorce.

Depp may find it even harder to clear his name in a separate defamation lawsuit he filed over an op-ed about the alleged abuse that Heard wrote in The Washington Post.

That hearing is expected to begin in August in Virginia under US laws putting the burden of proof on Depp.