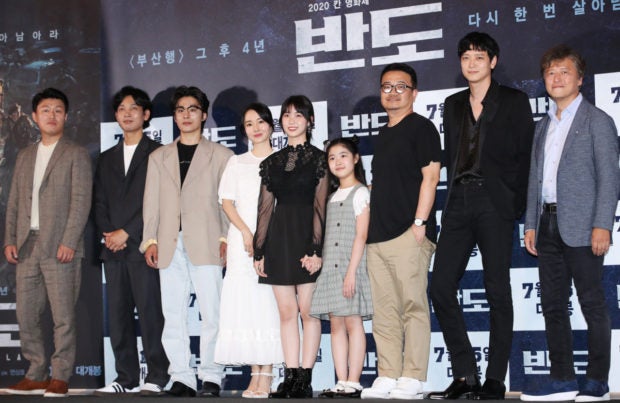 SEOUL — “Peninsula,” a sequel of “Train to Busan,” touts itself as a zombie flick that everyone can watch.

“I tried my best to deliver a universal message through a film which people of all ages could watch. I’m hoping ‘Peninsula’ becomes something for everyone to enjoy in theaters during this COVID-19 era,” director Yeon Sang-ho said during a press conference held Thursday in Seoul.

Exactly four years after the release of “Train to Busan” in the summer of 2016, “Peninsula” was unveiled in Seoul during a media premiere held Thursday. The director was joined by actors Gang Dong-won and Lee Jung-hyun.

Four years have passed, and the Korean Peninsula has become a land of zombies and survivors who have given up sanity in a hopeless situation. The zombies are faster and even more sensitive to sound and light, and savage madness is taking hold inside the mysterious Army Unit 631.

The film kicks off by putting “Peninsula” aside “Train to Busan.” When Gong Yoo was on a train four years ago, Gang Dong-won, playing Jung-seok, was headed to Incheon to get on a rescue ship. Even without the zombies, survival for Koreans outside the country is difficult, and Jung-seok returns on a mission to find a truck full of money. A horde of zombies ambushes Jung-seok, and Min-jung — played by Lee Jung-hyun — and her family rescue him. Together with Min-jung’s family, Jung-seok sets off to retrieve the truck seized by men from Unit 631.

“I wanted to take a different ending to the film from that of ‘Train to Busan.’ I intended to convey a more hopeful message. The characters want to escape Korea, but the outside world is not very rosy. I wanted to show that (survival is not about) where you are but with whom you are,” the director said.

While it was not an easy choice to star in a sequel of a hit film, Gang said he feels confident that “Train to Busan” fans will also enjoy the upcoming film.

“I was intrigued by the visions and ideas of the director. When I read the script, I could see that it was telling a different story from ‘Train to Busan’,” Gang said. “Awaiting a film’s release never feels easy. I feel a heavy weight on my shoulders, but watching the film today for the first time, I am actually feeling quite confident. We really tried our best to not let down those people who cherish ‘Train to Busan,’” the actor added.

Jung-seok is a former Army captain who loses his family to zombies and escapes to Hong Kong with his brother-in-law. Although he leads the film, according to Gang, Jung-seok is no hero.

“Although Jung-seok is a well-trained soldier, he is not a hero. In fact, the real hero would be Min-jung and her family. He sees hope again with them,” Gang said.

Min-jung lives with her daughter Yu-jin (played by Lee Ye-won) and step-daughter Joon (played by Lee Re) who she had rescued. An elderly former commander of Unit 631, who the girls refer to as “grandpa,” also lives with Min-jung’s family.

Once the protector of the survivors, Unit 631 has turned into a barbarous pit where humans prey upon their fellow humans, and Captain Seo (played by Koo Kyo-hwan) and Sergeant Hwang (played by Kim Min-jae) are portrayed as the worst of the villains. Jung-seok’s brother-in-law Cheol-min (Kim Do-yun), who accompanied Gang on the mission, is captured by the men of Unit 631 and becomes a victim of their foul play of hide-and-seek with zombies.

“It was actually scary. There were people who I knew among the zombie actors, but it seemed ironically horrifying to see them throwing themselves at me,” Kim Do-yun said about the zombie scenes.

According to the director, the space in which the film takes place largely determines how his zombies are characterized. For this film showing the post-apocalyptic Seoul, a car chase topped by an endless flood of zombies rushing at the cars bring the suspense to its climax.

While Yeon’s zombie apocalypse universe expansive, including the animated film “Seoul Station,” the prequel to “Train to Busan,” — the director noted his film is not about a massive universe or special people.

“The same goes for both ‘Train to Busan’ and ‘Peninsula.’ My films are about the ‘trivial’ people. Jung-seok is a very average person with an average desire, and so are all other characters of this film. I made the film to show people who are moved by their ordinary desires,” Yeon said.

“We have prepared for the film’s July release since last year, and although there were unexpected situations, we decided it was right to go with the original plan. Being at a press conference, I am reminded of the good days when the cinemas were fully packed with audiences. I sincerely hope this film helps to revive the film industry.”