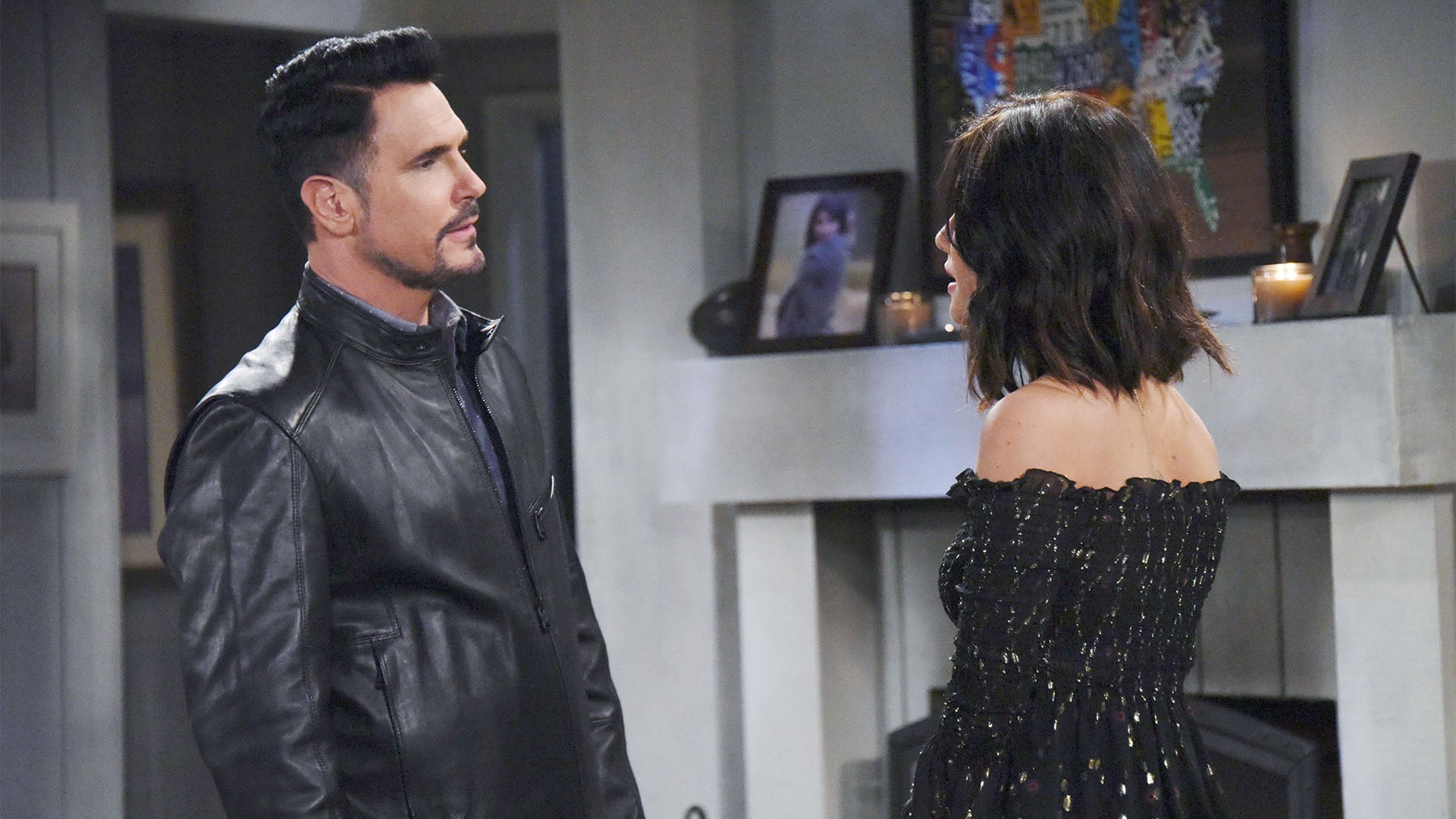 Don Diamont, Jacqueline MacInnes Wood in a scene in the television series “The Bold and the Beautiful.”

LOS ANGELES — Hollywood’s technical expertise can awe us with monsters and imaginary worlds. But is it capable of delivering a simple screen kiss during a pandemic marked by masks and social distancing?

Yes, according to the soap opera producer who is making that happen with a strategic approach to romance. “The Bold and the Beautiful,” in the vanguard of TV series that have resumed taping after an industry-wide shutdown in March, is relying on health advisers and coronavirus safeguards to bring cast and crew together.

“We feel almost like television pioneers all these years later because we’re the first ones out, blazing new ways of producing the shows with the current safety standards, and we’re getting the job done. It’s very exciting,” said Bradley Bell, executive producer of CBS’ “The Bold and the Beautiful,” which debuted in 1987 and is at roughly 8,300 episodes and counting.

Denise Richards, who plays Shauna Fulton, said she was excited to be back at work and pleased with the protective measures in place for the soap opera that, true to form, includes “a lot of love scenes.”

When “The Bold and the Beautiful” scripts written pre-coronavirus were reviewed in preparation for the new normal of production, the clinches initially were dropped. That was the cue for Hollywood creativity.

The solution: A carefully remote actor recites lines as their on-camera scene partner responds in a “low, intimate voice” and engages in “beautiful, yearning eye contact” with an off-camera doll, Bell said.

“But the fact is they’re all alone on the stage, making television magic,” he said, with dramatic flair.

One of the stand-ins is a mannequin relegated to the prop room some 15 years ago after starring in a cemetery scene about the faked death of character Taylor Hayes (Hunter Tylo). The other is a life-sized doll with no known TV credits.

But what about the payoff, the embrace and heart-stopping lip-lock? That’s where actors’ partners come in, which recently included cast member Katrina Bowden’s husband, musician Ben Jorgensen.

When Bowden’s Flo Fulton (daughter to Richard’s Shauna) is kidnapped and chained to a radiator, it’s co-star Darin Brooks, as Wyatt Spencer, who comes to the rescue.

“It really called for a big embrace and a kiss,” Bell said. “So once she was freed, we stopped tape, Katrina’s husband came in and they finished the scene. We see the back of his head, and I think it’s very convincing it’s really Darin.”

Richards was looking forward to taping a love scene with her husband, Aaron Phypers, standing in for co-star Thorsten Kaye’s character, Ridge Forrester.

“The Bold and the Beautiful,” which had never before halted production, remains among the TV and movie outliers in getting back to work.

The industry’s reboot has been “gradual and cautious” since state and local bans were lifted in June, the Los Angeles film office for location shooting, said Wednesday. The office, FilmLA, has tallied about 14 permit applications daily since its June 19 reopening, about 20% of what would be received in a typical period.

Among the other network serials, CBS’ “The Young and the Restless” plans to resume production next week, NBC’s “Days of our Lives” is targeting September, and ABC’s “General Hospital” has yet to announce a date. Prime-time shows also are in limbo, including those intended for the fall season. In the UK, the soap “Emmerdale” resumed filming last month.

The “learning curve” is steep, said Ken Corday, executive producer of “Days of our Lives,” which has been airing since 1965 and has efficiency down pat. When the shutdown occurred, the serial had enough banked new episodes to air through October.

Before the pandemic, “we were producing eight, one-hour episodes a week. That’s basically 40 or 50 scenes a day,” Corday said. “That’s going to be basically impossible to reopen, so to speak, at that pace. We’re going to have to be more careful. So will there be five shows a week, or more? Yet to be determined.”

It will certainly cost more, he said. Preventing the disease’s spread is labor and time intensive, as “The Bold and the Beautiful” is demonstrating.

Cast and crew are tested weekly for coronavirus, with temperatures taken daily when they arrive at the studio and again on the set. They answer health screening questions and are given a mask and sometimes a face shield, along with a small bin for scripts, water and hair and makeup brushes to be kept from contact with others.

A designated coronavirus coordinator is tasked with overseeing the production, including keeping people safely separated, masks or not. An initial testing glitch, which resulted in a high rate of inconclusive results, forced a production pause and revised procedures.

So far, all cast and crew have tested negative, Bell said.

Reel Health, which launched in response to the COVID-19 pandemic to serve the entertainment industry, hires medically trained workers to monitor sets and enforce protocols developed by a company epidemiologist and in accordance with industry and government standards, said Mario Ramirez, president and CEO.

“You need to be able to make sure that everyone entering the site, first and foremost, is healthy,” and that safeguards can keep a production running, Ramirez said.

Finding ways to put romance on the screen is inevitable and necessary, said Alicia Rodis, a veteran intimacy coordinator who helped the actors guild develop guidelines for taping scenes of romance and simulated sex.

“At the end of the day, intimacy isn’t going anywhere. Physical intimacy is a part of the human experience,” Rodis said. “And we’re going to have to find a way to be able to continue to tell these stories, even in extraordinary circumstances.”