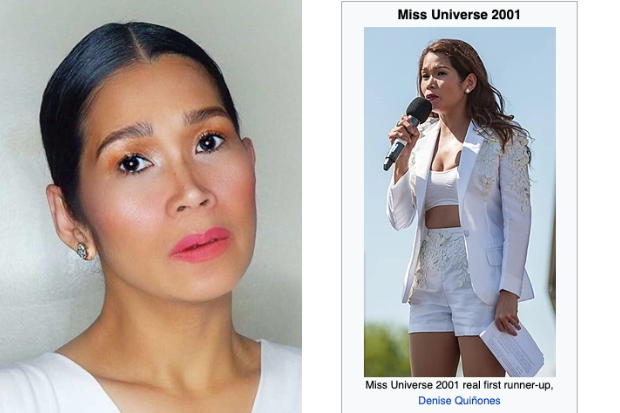 Before Catriona Gray and Pia Wurtzbach’s reigns, comedienne Pokwang (real name: Marietta Subong) turns out to have been crowned Miss Universe back in 2001 — at least according to Wikipedia.

Twitter user @khenterrific first shared the discovery that the photo of real Miss Universe 2001 Denise Quiñones was replaced by Pokwang’s picture in the Wikipedia entry.

The tweet then caught the attention of the comedienne, who found the Wikipedia edit hilarious.

Actor and poet Juan Miguel Severo meanwhile remarked that Pokwang looks like she can actually go toe to toe with the real beauty queen.

“Parang may laban naman po yung nasa picture,” he replied to Pokwang’s tweet earlier today. (The one on the picture looks like she has what it takes.)

As the online encyclopedia can easily be edited by millions of netizens, it is bound to have factual errors, be it intentional, unintentional, or inserted as a joke.

While the page bears the real beauty queen’s name, Pokwang’s photo is still the one uploaded for the article, as of writing. JB

Researchers developing AI that could correct outdated information on Wikipedia

Read Next
Ria Atayde on claim that Arjo was ‘friendzoned’ by Maine Mendoza: ‘Hala, epal’
EDITORS' PICK
Been there, done that but what’s the difference between MECQ and GCQ?
Smart 5G goes live
A gem of a residence in the new normal
Water remains our saving grace right now
BREAKING: 3,226 latest COVID-19 cases bring PH’s total to 106,330
PNP: Checkpoints back in MECQ areas
MOST READ
MECQ guidelines in infographics
MECQ in NCR, other areas: Mass transportation suspended, quarantine pass required anew
Want higher pay? Join the police force, Duterte tells nurses
Lacson takes up cudgels for health workers ‘threatened’ by Duterte
Don't miss out on the latest news and information.