NEW YORK — Carl Reiner, the ingenious and versatile writer, actor and director who broke through as a “second banana” to Sid Caesar and rose to comedy’s front ranks as creator of “The Dick Van Dyke Show” and straight man to Mel Brooks’ “2000 Year Old Man”, has died. He was 98.

Reiner was the father of actor-director Rob Reiner, who tweeted that his “heart is hurting. He was my guiding light.” The younger Reiner starred as Archie Bunker’s son-in-law on “All in the Family” and directed “When Harry Met Sally…” 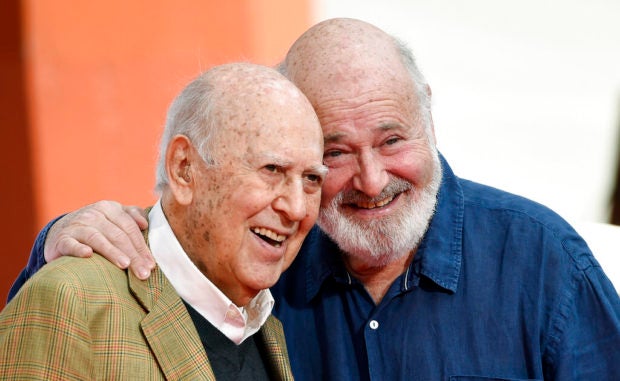 In this April 7, 2017 file photo, Carl Reiner, left, and his son Rob Reiner pose together following their hand and footprint ceremony at the TCL Chinese Theatre in Los Angeles. Image: Chris Pizzello/Invision/AP, File

In recent years, he was part of the roguish gang in the “Ocean’s Eleven” movies starring George Clooney and appeared in documentaries including “Broadway: Beyond the Golden Age” and “If You’re Not in the Obit, Eat Breakfast”.

Tributes poured in, with Van Dyke calling Reiner “kind, gentle, compassionate, empathetic and wise,” and Clooney saying he made “every room he walked into funnier, smarter, kinder.”

Betty White described herself as privileged to work with Reiner and “heartbroken.” Steve Martin said goodbye to “my greatest mentor in movies and in life. Thank you, dear Carl.” Billy Crystal said “all of us in comedy have lost a giant,” and Sarah Silverman said ”his humanity was beyond compare.” 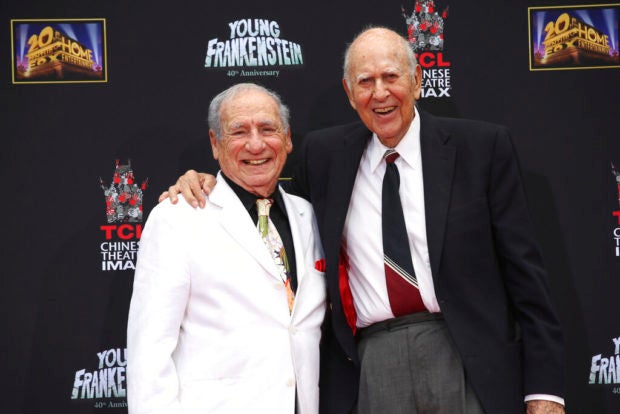 Brooks said he and Reiner had been best friends since meeting on “Your Show of Shows”.

“Carl was a giant, unmatched in his contributions to entertainment,” Brooks said. “When we were doing ”The 2000 Year Old Man” together there was no better straight man in the world. So whether he wrote or performed or he was just your best friend — nobody could do it better. He’ll be greatly missed. A tired cliché in times like this, but in Carl Reiner’s case it’s absolutely true. He will be greatly missed.”

Reiner directed such films as “Oh, God!” starring George Burns and John Denver; “All of Me”, with Martin and Lily Tomlin; and the 1970 comedy “Where’s Poppa?” His books include “Enter Laughing”, an autobiographical novel later adapted into a film and Broadway show; and “My Anecdotal Life”, a memoir published in 2003. He recounted his childhood and creative journey in the 2013 book, “I Remember Me”.

But many remember Reiner for “The Dick Van Dyke Show”, one of the most popular TV series of all time and a model of ensemble playing, physical comedy and timeless, good-natured wit. It starred Van Dyke as a television comedy writer working for a demanding, eccentric boss (Reiner) and living with his wife (Mary Tyler Moore in her first major TV role) and son. 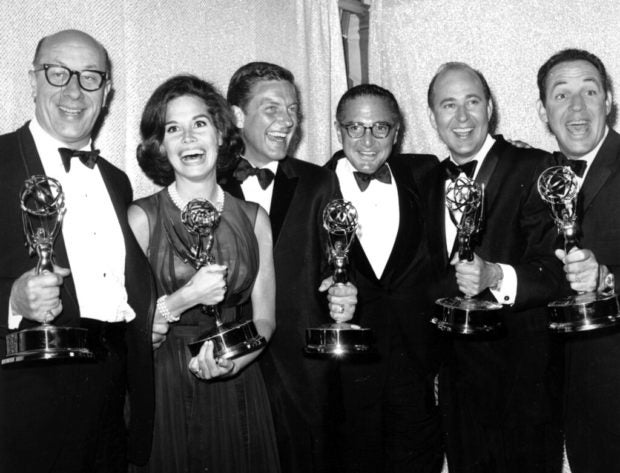 “The Van Dyke show is probably the most thrilling of my accomplishments because that was very, very personal,” Reiner once said. “It was about me and my wife, living in New Rochelle and working on the Sid Caesar show.”

The pilot, written by Reiner, starred himself as Rob Petrie, and aired in July 1960. When the show was reworked (CBS executives worried Reiner would make the lead character seem too Jewish), Van Dyke was cast and the program ran from 1961 to 1966. One famous fan, Orson Welles, was known for rushing to his bedroom in the afternoon so he could be near a TV when the show was on. 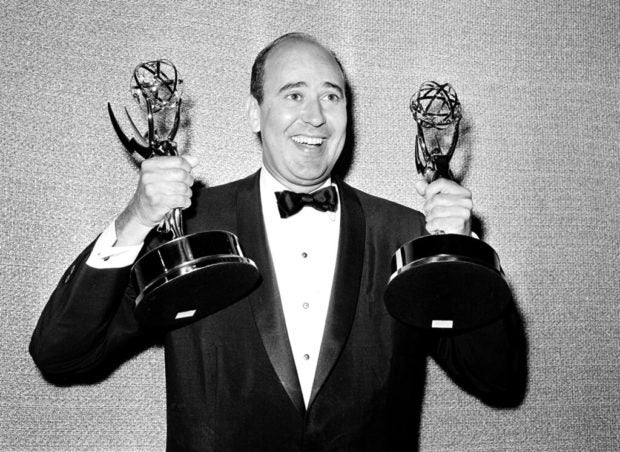 “Although it was a collaborative effort,″ Van Dyke later wrote, ”everything about the show stemmed from his (Reiner’s) endlessly and enviably fascinating, funny, and fertile brain and trickled down to the rest of us.”

The storyline had Petrie as the head writer for “The Alan Brady Show”, a comedy-variety series not unlike “Your Show of Shows”, in which Reiner, as Brady, was the egocentric star. Petrie’s fellow writers were character actors Morey Amsterdam as Buddy Sorrell and Rose Marie as Sally Rogers.

It was an early parody of the Caesar show, which would later be dramatized in the film “My Favorite Year” and Neil Simon’s play “Laughter on the 23rd Floor”.

Besides acting in and producing the “Van Dyke” series, Reiner wrote or co-wrote dozens of episodes. Although the show was the best of good clean fun, it wasn’t clean enough for network censors. Reiner often battled network officials over the sleeping arrangements of Rob and his wife; the Petries slept in twin beds. He wanted them to sleep in a double bed.

Reiner joined the classic comedy revue “Your Show of Shows” in 1950 after performing in Broadway plays. Much of Reiner’s early work came as a “second banana” — although, as Caesar once put it, “Such bananas don’t grow on trees.” He performed in sketches — satirizing everything from foreign films to rock ‘n’ roll — and added his talents to a writing team that included Brooks, Simon, Woody Allen and Larry Gelbart.

“As second banana,” he told TV Guide, “I had a chance to do just about everything a performer can ever get to do. If it came off well, I got all the applause. If it didn’t, the show was blamed.”

It was during the “Show of Shows” years that Reiner and Brooks started improvising skits which became the basis for “The 2000 Year Old Man.” Reiner was the interviewer, Brooks the old man and witness to history.

Reiner: “Did you know Jesus?”

Brooks: “I knew Christ, Christ was a thin lad, always wore sandals. Hung around with 12 other guys. They came in the store, no one ever bought anything. Once they asked for water.”

After the pair performed the routine at a party, Reiner said Steve Allen insisted they turn their banter into a record. The album, “2000 Years with Carl Reiner and Mel Brooks,” appeared in 1960 and was the start of a million-selling franchise.

The duo won a Grammy in 1998 for their “The 2000 Year Old Man in the Year 2000” and Reiner won multiple Emmys for his television work. In 2000, he received the Kennedy Center Mark Twain Prize for Humor. When the sound system failed at the start of the ceremonies, Reiner called from the balcony, “Does anybody have four double-A batteries?”

Besides “All of Me”, Reiner directed Martin in “Dead Men Don’t Wear Plaid”, “The Man With Two Brains” and “The Jerk”.

Carl Reiner was born in 1922, in New York City’s Bronx borough, one of two sons of Jewish immigrants. He grew up in a working-class neighborhood, where he learned to mimic voices and tell jokes. After high school, Reiner attended drama school, then joined a small theater group.

During World War II, Reiner joined the Army and toured in GI variety shows for a year and a half. Back out of uniform, he landed several stage roles, breaking through on Broadway in “Call Me Mister”.

He married his wife, Estelle, in 1943. Besides son Rob, the couple had another son, Lucas, a film director, and a daughter, Sylvia, a psychoanalyst and author. Estelle Reiner, who died in 2008, had a small role in Rob Reiner’s “When Harry Met Sally…” — as the woman who overhears Meg Ryan’s ersatz ecstasy in a restaurant and says, “I’ll have what she’s having.”

Carl Reiner’s greatest disappointment was “Bert Rigby, You’re a Fool”, a 1989 musical he wrote and directed that starred Robert Lindsay, a British actor Reiner believed could be a new Dick Van Dyke. The film flopped, and Reiner’s career as a director faded.

Reiner, inducted into the Academy of Television Arts and Sciences’ Hall of Fame, remained involved in other entertainment projects. In the 1990s, he reprised the Alan Brady character for an episode of “Mad About You”.