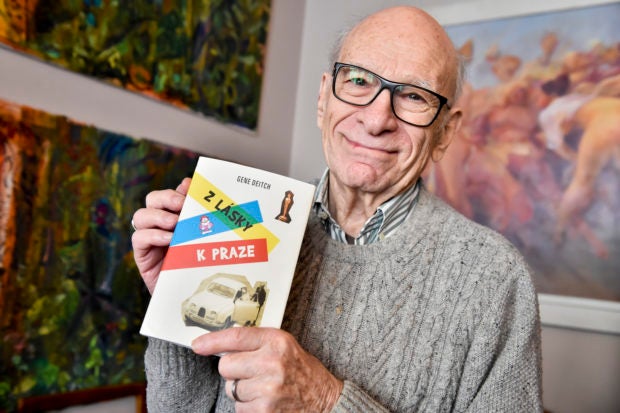 Director and animated film producer Gene Deitch poses with his book of memories “For the Love of Prague” in Prague, Czech Republic. Image: CTK/Vit Simanek via AP

Gene Deitch, an American Oscar-winning illustrator, animator, film director and producer has died. He was 95.

His Czech publisher, Petr Himmel, told The Associated Press Deitch died unexpectedly during the night from April 16 to 17 in his apartment in Prague’s Little Quarter neighborhood. No further details were given.

Deitch’s movie “Munro” won the Academy Award for Best Animated Short Film in 1960. He was also nominated for the same award twice in 1964 for “Here’s Nudnik” and “How to Avoid Friendship”.

Earlier, he had created the “Tom Terrific” series, while the “Sidney’s Family Tree”, which he co-produced was nominated for an Academy Award in 1958.

Born Aug. 8, 1924, in Chicago, Deitch arrived in Prague in 1959 intending to stay for 10 days, but fell in love with his future wife, Zdenka, and stayed in the Czechoslovakian capital.

Working from behind the Iron Curtain, he directed 13 episodes of “Tom and Jerry” and also some of the “Popeye the Sailor” series.

He captured life in communist Czechoslovakia and later in the Czech Republic after the 1989 anti-communist Velvet Revolution in his memoirs “For the Love of Prague”.

In 2004, he received the Winsor McCay Award for his lifelong contribution to animation.

Deitch is survived by his wife and by three sons from his first marriage, all of whom are cartoonists and illustrators. RGA

A Filipino in Disney TV lives to write our ‘wild, worth-telling’ stories

Disney animator who worked on ‘The Little Mermaid’, ‘The Lion King’ dies from coronavirus at 91