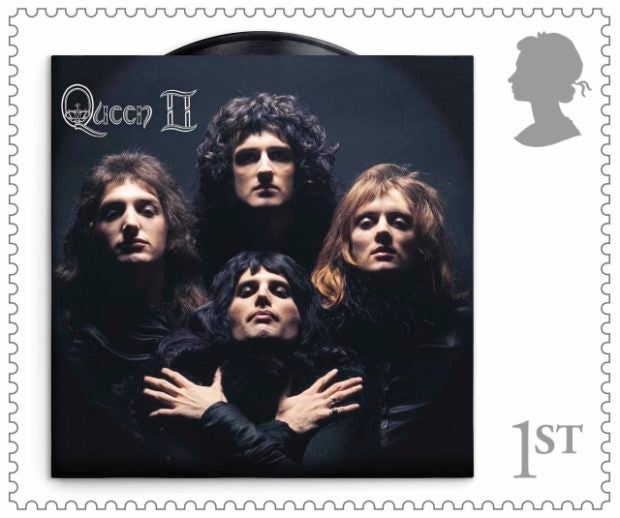 The rock band Queen, who has sold more than 300 million records, becomes the third music group to have a dedicated stamp issue after the Beatles in 2007 and Pink Floyd in 2016.

Now commemorating the 50th anniversary of their formation, Queen will be celebrated in a set of 13 stamps featuring artwork from their most popular album covers and images from their most extravagant live performances.

Among them are iconic album covers like “Queen II”, “A Night at the Opera”, “Greatest Hits”, “The Works”, as well as “Innuendo”, which notably marked the band’s last album to be released during frontman Freddie Mercury’s lifetime.

Completing the set are individual stamps of each of Queen’s four members on stage, including Freddie Mercury at Wembley Stadium during the band’s 1986 “Magic Tour”, and bassist John Deacon at Hammersmith Odeon during 1975’s “A Night At The Opera” tour.

The centerpiece of the collection is a black-and-white picture of Queen by British photographer Johnny Dewe Mathews taken during the group’s first-ever studio photoshoot in a Primrose Hill studio.

“It’s hard to put into words what I feel when looking at these beautiful stamps. Since we four precocious boys started out on our quest 50 years ago, our lives have been devoted to making our impossible dream come true. Sometimes it’s strange to wake up and realize the position in which we are now held — we have become a national institution! And nothing brings this home more than this incredible tribute from Royal Mail,” guitarist Brian May said in a statement.

“With their truly original, theatrical sound and effortless ability to mix musical styles, Queen are rock royalty. We pay tribute to one of the most loved bands of all time with these stunning stamps,” Philip Parker, head of stamp strategy at Royal Mail, added in a statement.

The full set of 13 stamps will go on general sale for 16 pounds (around $20, P1,000) beginning July 8, with pre-orders already available in Queen’s online store and in the Royal Mail’s website. RGA