With Evans, Fanning and Bruhl on NY set of ‘Darkness’ . . . in Hungary (Conclusion) 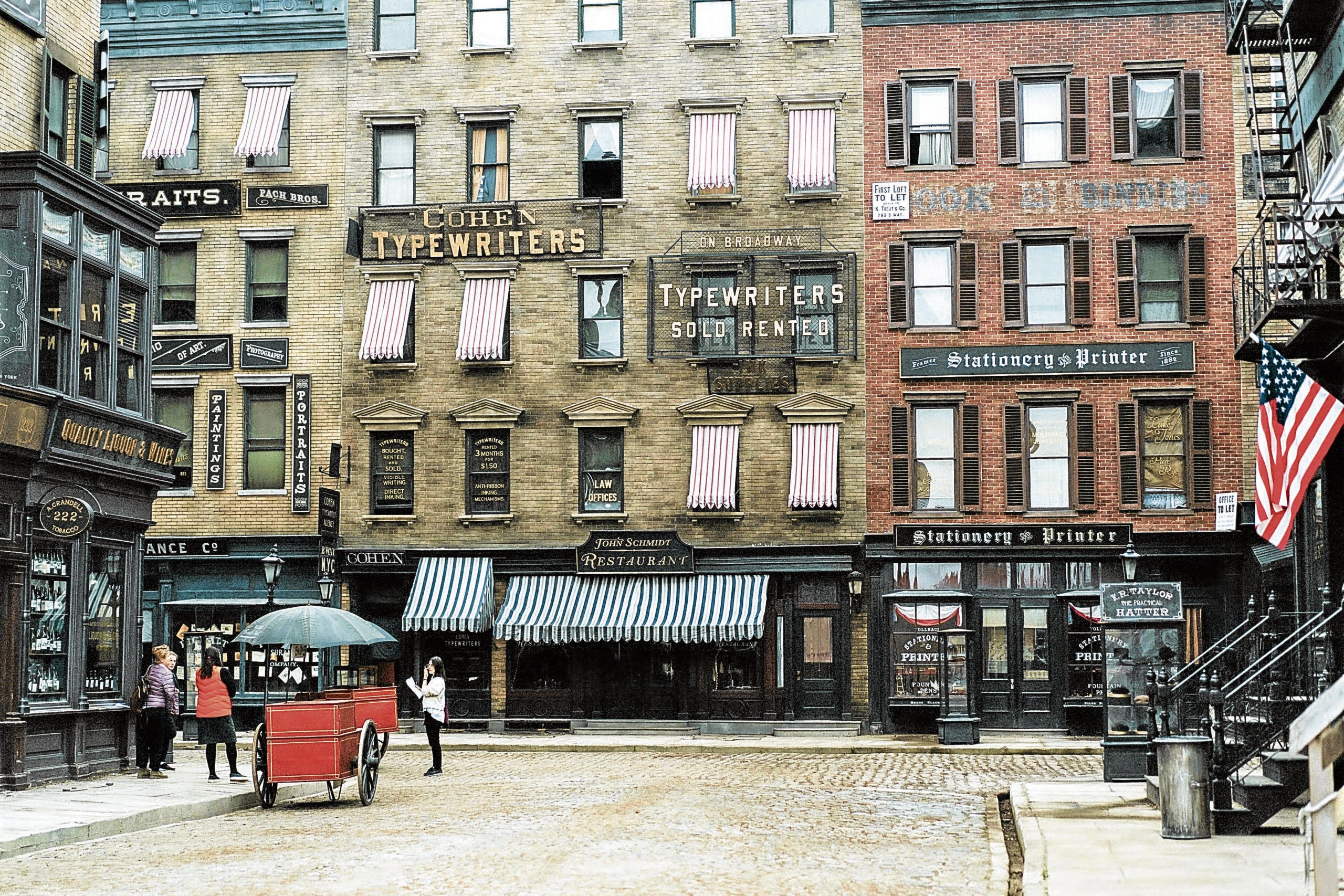 “The Alienist: Angel of Darkness” set in Hungary

“As you know from the first season, John Moore is a very dapper dresser,” Luke said, looking that way indeed in his costume. “He’s not short of a penny, so he has a good tailor. The costume designer, Rudy (Mance), who has been with us from Season One, designed all of John’s new attire. This is a very beautiful suit.

“It’s rock-hard and very uncomfortable. You get so used to them after a while and now, after six months, it’s just normal attire. It’s always nice to look in the mirror when you do period costume.”

Told that we just watched the Delmonico’s scene, Luke said, “Oh, gosh. You’ve seen a very important scene. He (his character John) is not an alcoholic anymore, which is a shame because I enjoyed that in the method. He still works for the New York Times, but now he’s a full-fledged reporter, which has given him a much more well-balanced sense of purpose. He is engaged to Violet, who’s the daughter of William Randolph Hearst.

“That adds a very interesting historical angle to the story. It is one year later, so times have changed quite a bit. A lot has happened in New York City since we were there last. It’s very nice to be back. The back lot has changed. There’s a hotel there now, which wasn’t there before.” 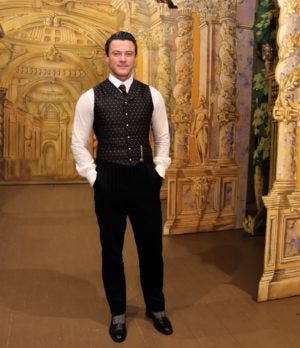 On how this second season opens, Luke admitted, “Honestly, I can’t even remember. It was six months ago. It feels like I’ve been on an enormous journey. That shows how far we’ve come, right? We’ve not gone any lighter. In fact, I would say we’ve gotten a little darker in subject matter.

“For anybody who knows the book or doesn’t know the book, they’ll be rewarded with a very gritty, sinister story. Which is the reason why you tune into this show in the first place. But especially to revisit the characters of John, Sara and Laszlo.”

“There are new characters, new story lines,” he added. “We introduce the audience to different members of New York society. There is an underworld, which actually impacted a lot of the investigations. There’s a lot of involvement by the police department, which still is as corrupt as it was in the first season.”

“It’s very time-consuming. It’s very slow and over a day, like today, it has taken five hours to shoot the scene.

“When I’m with Daniel and Dakota, and I’m sure they would say the same things, we can just chat because we’re very good friends. We have a lot to talk about and that keeps us engaged. We don’t stay in character for the whole time. We jump back in and out during the takes.

“When you’re in a scene on your own, or it’s a big action sequence, that sometimes can take much longer. I’ve learned to be patient, which is not something I was born very good at.”

Asked if he misses being onstage, the actor whose West End credits include “Miss Saigon,” where he appeared with Filipino actors, answered, “I miss live theater. I miss being able to perform to an audience and tell a full story. It’s a very different discipline.

“But I don’t miss singing (in musical theater) because I’m doing it all the time and having the opportunity to sign this deal with BMG and record the album [‘At Last’] has been something I was wanting to do since I was a kid.”

“I totally know it’s not well to tell the press what I plan to steal,” he replied with a grin when asked what prop or costume from the series he plans to take home. “But hopefully … I’m going to be allowed to take it. But I have all the rings that all my characters (in past shows and films) have ever worn.

“He (John) does have a beautiful ring. So, I will have to be very nice and schmooze the prop master. If I buy her a nice bottle of champagne, maybe she’ll let me have this ring to add to my collection, which has become quite extensive now.” 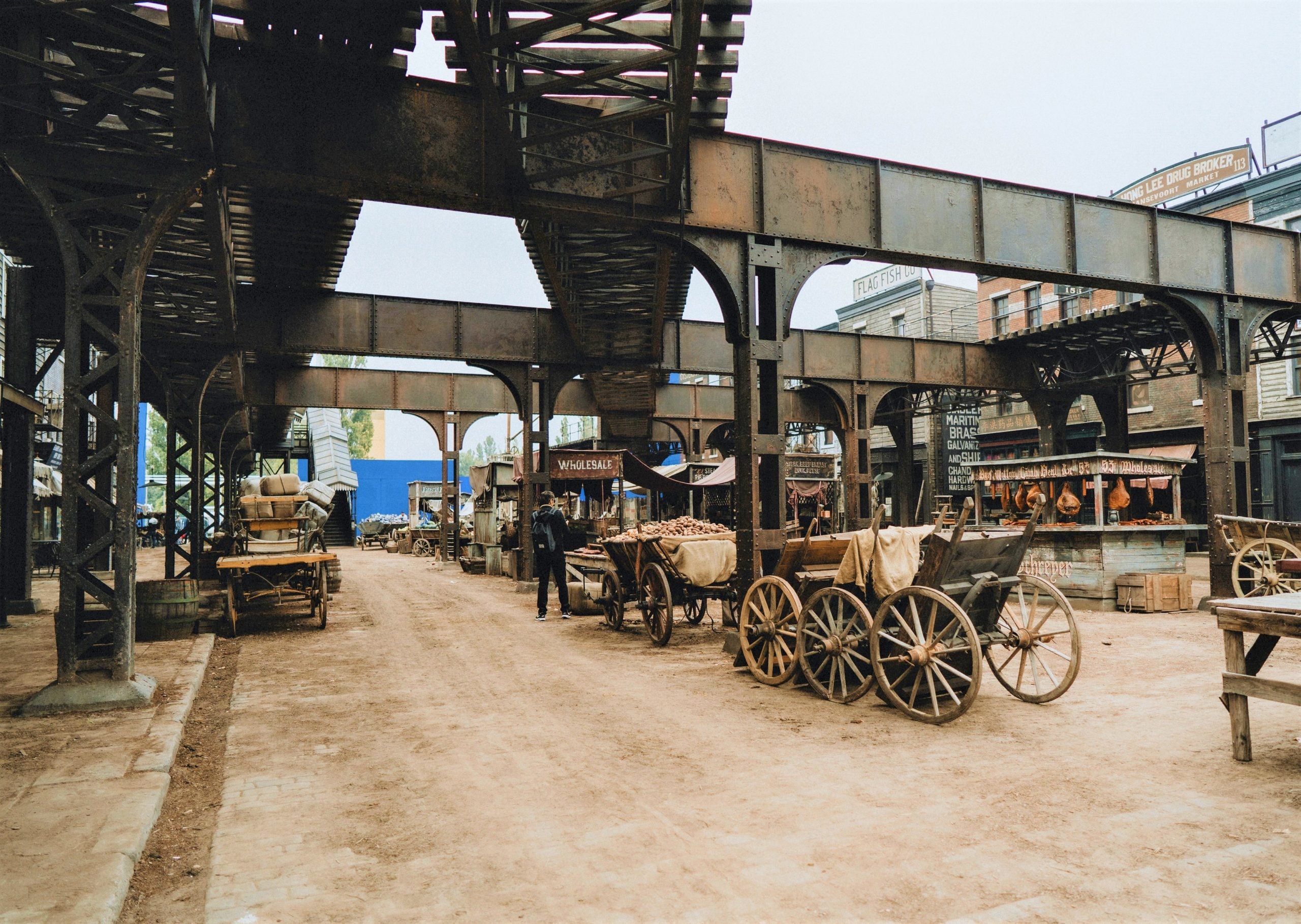 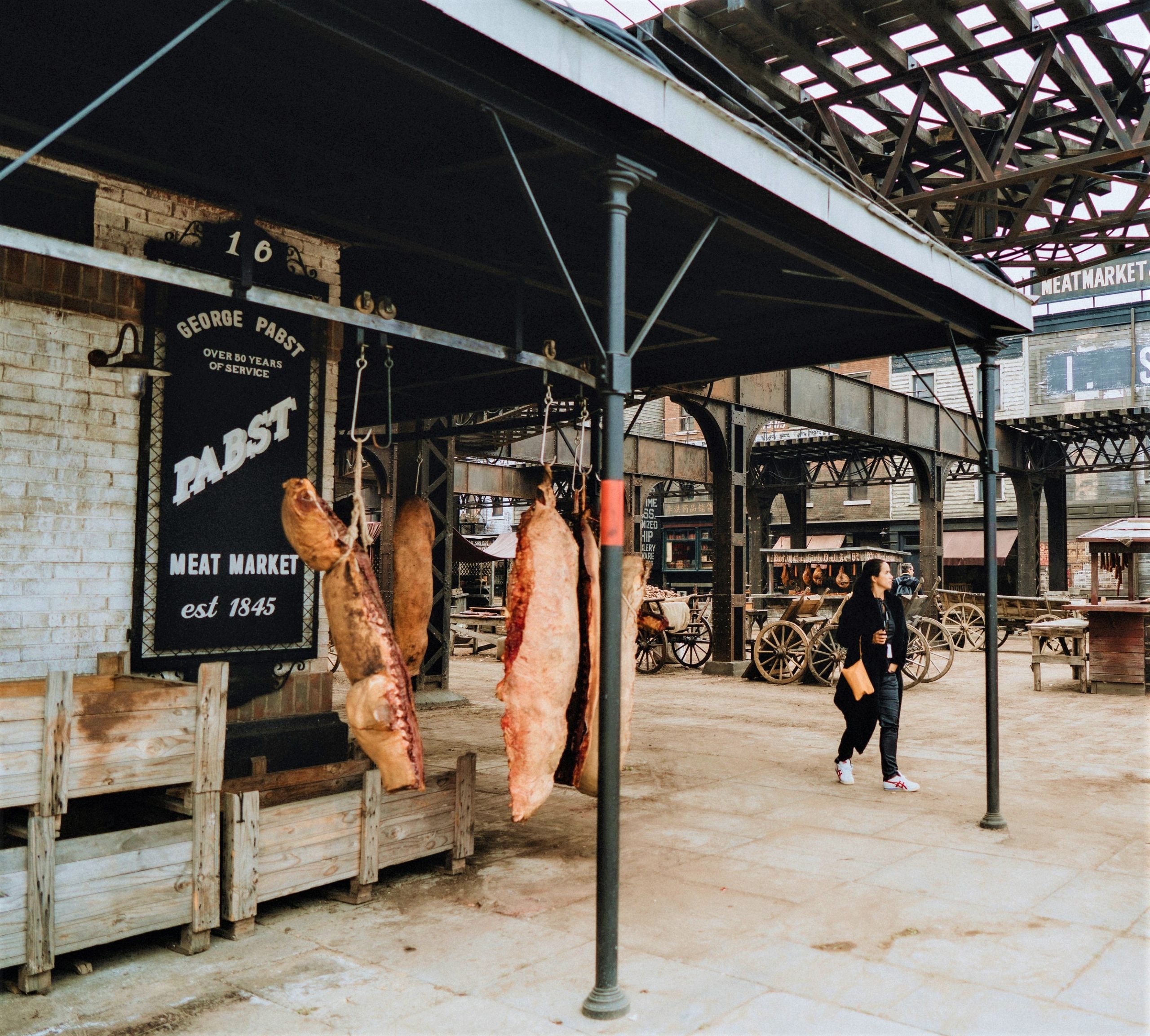 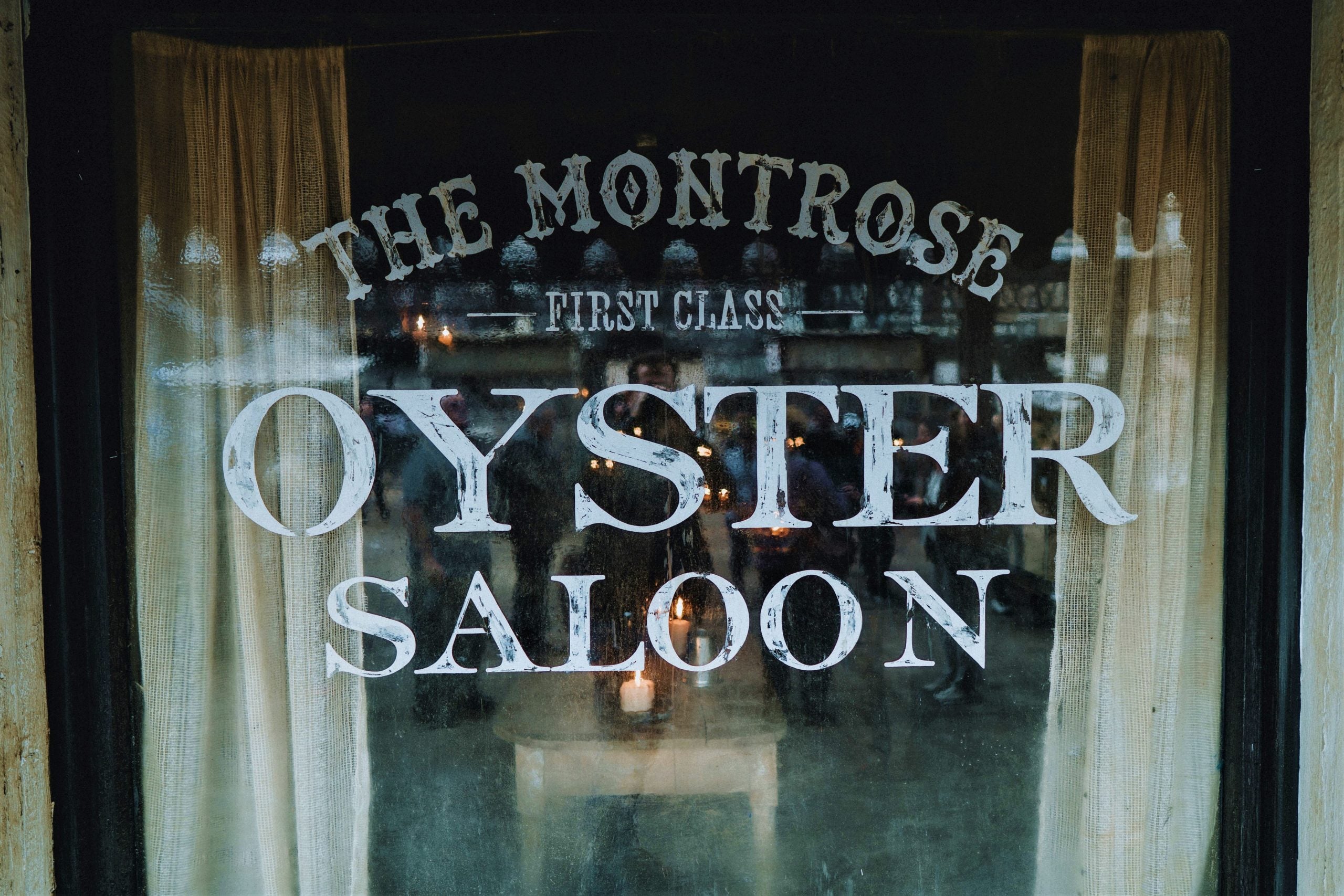 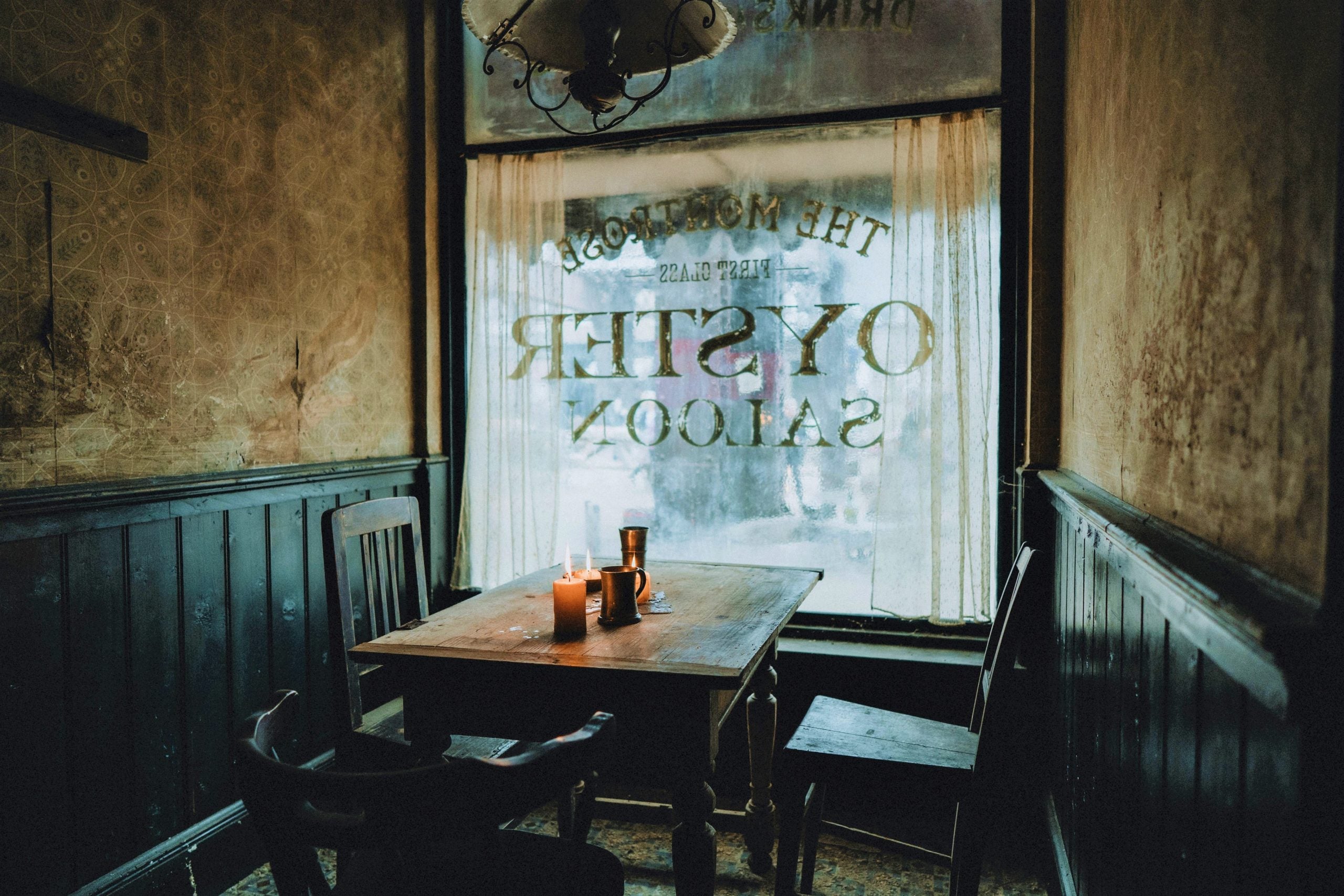 “No, that’s my personal ring,” Daniel Bruhl pointed out. “It’s not the engagement ring with Karen Stratton (Lara Pulver).”

Daniel also looked natty in his black formal costume. “One of the key elements is the dedication that was put on this show. To show that period’s time. So, especially in the costume department, they have done an incredible work creating these costumes.

“It brings you back to that Victorian era. I find it a beautiful fashion at the time. Dakota always looks fantastic.”

“It’s a funny feeling because I never revisited projects,” Daniel cited about being part of a returning series. “On the one hand, it feels familiar because you know your character, the other characters, that world and yet things have evolved. It’s a brand-new case. It’s a kidnapping this time, and we’re dealing with an equally complex, elusive vicious killer.

“Dakota’s character, Sara, is now a very determined, smart detective and running her private detective agency. But she still needs the help of me as Dr. Kreizler and of John, who’s now a journalist.

“So, again, it’s a strong teamwork. My character is exploring new knowledge in the field of psychology that he hasn’t in the previous season. Just to mention one thing without giving away too much is that hypnosis will be an important part in this season. It was also an exhilarating experience because I was hypnotized twice, which I’ve never done in my life.” 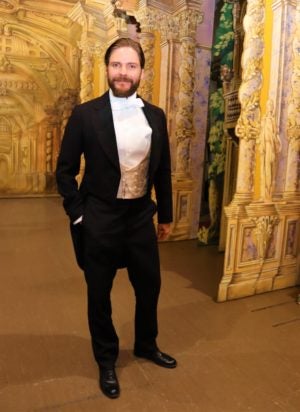 Daniel confirmed that playing a psychiatrist or an alienist has made him more analytical in real life. “Definitely, it has widened my scope. It has changed the relationship with my wife, who’s an alienist (Felicitas Rombold, an accomplished psychotherapist). So, there’s more understanding, even more curiosity and interest in what she does.”

The actor revealed why the restaurant scene was important: “Today was a bittersweet moment that you witnessed because it’s a farewell moment. This is something that I will be forever thankful for—because I found new friends for a lifetime in Luke and Dakota. It was the last moment we see each other as a team in the show.”

On his character finding a match in Karen Stratton (Lara Pulver), Daniel said, “She definitely is. They share the same thoughts and values. She’s a fascinating, daring, blunt, person who opens up Kreizler because he still is a very reserved person. He is brilliant in analyzing everyone else around him, but when it comes to himself, he’s still a troubled man.

“Thanks to her, he is able to take personal risks. I don’t want to tell you too much, but she’s confronting him with a truth about himself that nobody else, not even Sara Howard, addressed to him in the way she does.”

“I got married during Season One,” Daniel said about his union with Felicitas, with whom he has a son. “That was the only holiday they gave me.”

“It goes along with the journey of my character in the show because a lot of questions raised for me as Laszlo Kreizler go in that direction,” Daniel shared about how marriage inspires him as a person and actor. “Fatherhood, motherhood are big matters in the show. I have to say, to be married and to be a father is good.”

Like his coleads, Daniel loves the back lot made just for the series. “My favorite location still is the back lot because there you really have the feeling that you’re in New York at the end of the 19th century.

“And it’s nice to have some new locations to explore different paths. It’s nice to see that Cyrus has also evolved, because he used to work for me. Cyrus was very dependent and now, he’s an independent man running his oyster bar. I keep seeing, exploring buildings that I didn’t in Season One.”