As he expands reach with debut EP, TikTok hotshot Powfu muses about success and the music of Gen Z The 21-year-old’s breakout hit “Death Bed” has been streamed over half a billion times worldwide.

Death Bed,” the breakout hit by the up-and-coming Canadian rapper Powfu, was first released on SoundCloud and YouTube in February 2019.

And while it did pull in good numbers in the months that followed, it wasn’t until earlier this year that it became the ubiquitous Gen Z anthem that it is today. And the song owes a good chunk of its success to the video-sharing app TikTok, where it has been used in over 5.6 million posts.

Now, “Death”—an emotive mix of hip-hop and lo-fi beats—has been streamed over half a billion times worldwide across different platforms; certified gold in seven countries; and reached the No. 1 spot on international charts, including the Billboard Hot Rock and Alternative Songs.

“I have always known that social media is a huge part of a music artist’s profile. But I didn’t realize how powerful TikTok is. It can help lots of musicians who are underground,” Powfu, whose real name is Isaiah Faber, said in a video interview to promote his debut EP, “Poems of the Past.”

The recording artist said of his song’s slow but steady trajectory, “When I originally released it, I didn’t have a big fan base. That happened later on down the road. I think some things just take a while to catch on.”

The song has also spawned a multitude of video covers online—some of them translated to different languages.

“It’s a crazy feeling. I feel so blessed to have a song pop off there. It’s so cool seeing the whole world sing it and do different covers in different languages. There was this trio, a girl and two guys, who rapped in their own language. They killed it, and it was amazing,” the 21-year-old artist said. 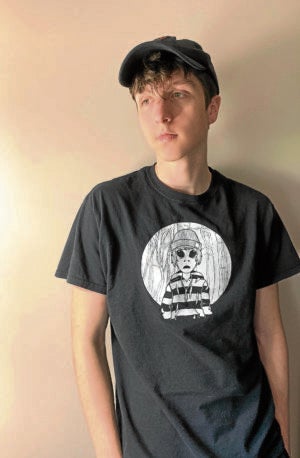 Powfu grew up in a musical family. His father, Dave Faber, is a member of the pop-punk band Faber Drive, and taught him how to play the drums when he was a child. At 16, he started to dabble in songwriting and music production. He camped out in the house basement, where he recorded his work using his laptop and his dad’s microphone.

While he’s greatly influenced by pop-punk (Blink-182, Yellowcard) and hip-hop (MadeinTYO, G-Eazy), Powfu found himself experimenting and gravitating toward lo-fi, after stumbling upon catchy beats on SoundCloud.

“When I first started releasing music and putting them on SoundCloud when I was in Grade 12, it was just regular hip-hop music. Then, I discovered some lo-fi beats that I ended up really liking. So, I started rapping over them,” said Powfu, who has been creating music and playing video games while in quarantine.

Lo-fi, which is derived from “low fidelity,” is a musical genre or aesthetic that revels in imperfections in the production—intentional, at times—like a hiss, a crackle and a warm, hazy soundscape. Today, lo-fi music is often associated with chill-sounding backbeats, jazzy and soulful instrumental flourishes, and vaguely familiar melodies. This generation’s “muzak,” if you will.

But coupled with contemplative hip-hop verses or some whimsical cooing, and you get something that sounds new, but still strangely nostalgic and personal.

“There are lots of kids trying to make music themselves in their rooms. And it’s inspiring to see other people doing that stuff. And when it sounds lo-fi or not the best quality, it kind of feels more personal, because you can hear sounds from the background,” he said.

And this holds true for his six-track EP, which features a remix version of “Death.” There are also new tracks, like “I’ll Come Back to You” and “A World of Chaos,” which both have subtle pop-punk elements.

‘It’s a mix of songs that has a variation of styles that I have done in the past. And I call it ‘Poems of the Past’ because I love talking about memories a lot … about the past,” said Powfu, who delivers his lyrics—usually about young love or family woes—in an almost unaffected cadence.

Given the chance, Powfu would love to be able to replicate the success of “Death.” But he doesn’t want that pressure. “I try not to think about that stuff. I just want to do music because I have fun making it,” he said. “I don’t care if I get thousands of views or millions, as long as there are people liking the music and as long as I’m making it.”

Read Next
What these 5 stars are like as fathers
EDITORS' PICK
OCTA Research warns vs gatherings as it notes slight rise in COVID-19 cases
Makati, Baguio, Davao among 7 high-risk areas for COVID-19 transmissions
BOI calls for more manufacturing companies to repurpose facilities and help reshape COVID-19-stricken economy
Diego Maradona, 60: Argentine soccer genius saw heaven and hell
Public warned against use of fake CopperMask
Experience clearer calls nationwide with Smart VoLTE
MOST READ
Ex-beauty queen Sandra Seifert posts photo of son with Cesar Montano
Shake-up continues: Another Cayetano ally booted out from House post
PH Navy gets ‘eye in the sky’ from US: 8 drones worth P710M
Makati, Baguio, Davao among 7 high-risk areas for COVID-19 transmissions
Don't miss out on the latest news and information.