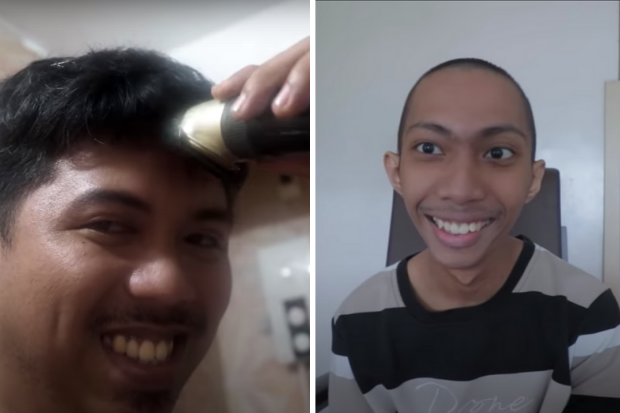 Filipino YouTube star Lincoln Velasquez, popularly known only as Cong, is once again showing his support for fellow vlogger and friend Emman Nimedez who is battling cancer.

Cong, whose YouTube channel Cong TV currently has over 5.52 million subscribers, shaved his head in solidarity with Nimedez, who has begun undergoing chemotherapy.

Nimedez last month announced that he had been diagnosed with acute myeloid leukemia, a type of blood cancer. In a vlog titled “KINIS KINTAB” posted on June 13, he decided to go bald, reasoning that he was going to lose his hair anyway because of chemotherapy.

“So, sa mga nakapanood ng vlog ni Emman, nakita niyo naman na nagpakalbo na siya (So, to those who have watched Emman’s vlog, you have already seen that he had decided to go bald),” Cong said in his most recent vlog, titled “BERSWAN,” posted on Wednesday, June 17.

While Cong did not show fans his bald look yet in the said vlog, he showed how his friends and family reacted upon seeing him without hair as he had shaved his head in secret.

Cong, with his Team Payaman friends, last month held a fundraising livestream effort for Nimedez, in which they pledged the money they earned as aid for Nimedez’s treatment.

The members of Team Payaman went up against the Splash Brothers in a “Tekken” and “Mobile Legends” tournament for the livestream, where they were able to raise $6,518, or over P326,000, for Nimedez.

Cong and Nimedez, two of the most famous content creators in the country, have been friends for years and have appeared in each other’s vlogs numerous times.  /ra