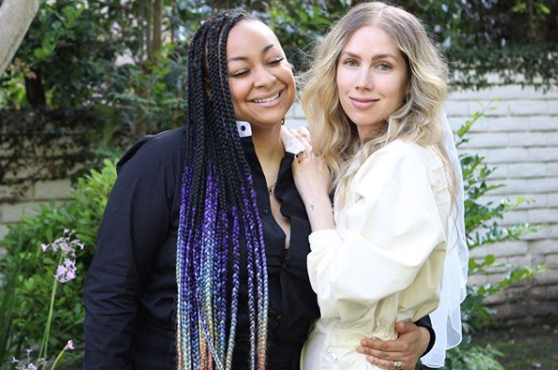 Actress and singer Raven-Symoné recently got hitched to her partner, Miranda Maday.

The “That’s So Raven” star showed their intimate backyard wedding and expressed her adoration for her wife via Instagram yesterday, June 18.

“I got married to a woman who understands me from trigger to joy, from breakfast to midnight snack, from stage to home,” Symoné said. “I love you Mrs. Pearman-Maday! Let’s tear this world a new as*hole!”

I got married to a woman who understands me from trigger to joy, from breakfast to midnight snack, from stage to home. I love you Mrs. Pearman-Maday! Let’s tear this world a new asshole!!! I’s married NOW

The newlyweds also showed their rings and their matching tattoos on their ring fingers in a follow-up post.

@winterstone thanks for the corona solid!

The actress shared a few outtakes of the ceremony that showed them embracing and kissing. Symoné was dressed in black, while Maday donned a white outfit and a veil. The singer also promised to release more music soon on her Instagram account today, June 19.

“The outpouring of love and congratulations have filled our hearts immensely,” Symoné said. “Thank you to everyone!”

The outpouring of love and congratulations have filled our hearts immensely. Thank you to everyone!!!! I won’t bombard y’all with too many pix, but yeah more music soon! Hehe.

The singer addressed her sexuality back in August 2013 when she tweeted that she could “finally get married” after the US Supreme Court struck down a provision of a law denying federal benefits to married gay couples.

Symoné revealed that she knew about her sexuality when she was 12 years old during an interview with Oprah Winfrey. The actress said that she was proud to be who she is and did not want to be labeled “gay,” as seen on OWN’s YouTube channel on Oct. 5, 2014.

Symoné said, “I want to be labeled a human who loves humans.”  /ra

Lizzo slams fat shamers: ‘I’m not working out to have your ideal body type’

Read Next
Netizens on Angel Locsin’s curvy figure: ‘She has nothing to prove’
EDITORS' PICK
What’s happening to the ICT Industry and its role in helping businesses today
Water remains our saving grace right now
Roque to Del Rosario: Don’t dictate what Duterte should do in West PH Sea row
US Congress bill seeks to halt assistance to PH police, military
AFP chief asks Facebook to bring back pages of ‘advocacy groups’
Siomai King Express debuts with mouth-watering seasonal products
MOST READ
ABS-CBN chairman Gabby Lopez resigns from network, other Lopez-owned firms
Pogo exodus seen to empty more than a tenth of Metro Manila offices, condo units
How can I tell the difference between the flu and COVID-19?
Think tank Infrawatch PH raises more red flags on Manila Bay project
Don't miss out on the latest news and information.