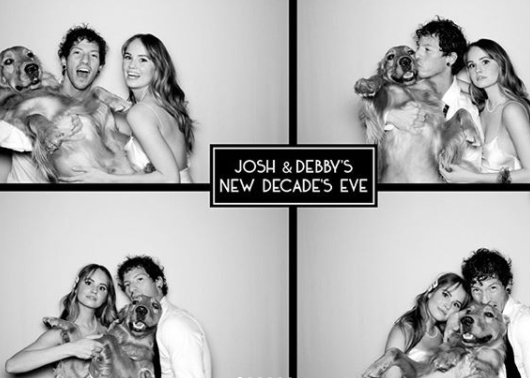 “Insatiable” star Debby Ryan and the drummer of music duo Twenty One Pilots, Josh Dun, pulled off an intimate wedding with only 28 days of preparation.

Ryan and Dun confirmed that they tied the knot last New Year’s Eve in Texas, USA, according to Vogue on May 21.

Much to their fans’ surprise, the couple’s “Josh & Debby’s New Decade’s Eve” party did not only mark the new year but also the couple’s union. Ryan showed some outtakes of the said event via her Instagram account on Jan. 3 without mentioning the wedding.

“[Got] all dressed up and closed out the decade with family and friends,” she said. “[Little] destination celebration party camp as an excuse to finally bring together our core folks from all corners of our worlds (lightning emoji) we danced all night and had milk n cookies and I had the most fun of my life.”

Ryan and Dun held their pet dog for the photobooth photo. Both the couple and their guests were also dressed in formal attires.

Ryan gave another hint of their union when she mentioned everyone who made the “48 [hour] Party Camp” possible, in her separate post on January 4.

“We began to flirt with the idea of having a destination party celebrating the new decade, then decided in December to get married [in Austin] on New Year’s Eve, and just keep dancing until after the ball dropped,” Ryan was quoted as saying.

The actress also stated that it felt like the right time to get married. Ryan recalled how one of her dear friends died the previous summer and how it affected her.

“When he passed, it really rocked me and put a lot of things in perspective,” she said in the report. “It didn’t feel important to wait anymore, to stop being busy, or for things to line up perfectly—intending to do things is not nearly as powerful as doing, as we aren’t promised tomorrow.”

The couple also spoke in detail about how they planned the wedding in less than a month and how they wrote their own vows for the ceremony. Ryan and Dun’s dog, Jim, was apparently the couple’s ring bearer as well.

“Joshua called him (dog) and he sprinted down the aisle, and after discovering the knots were a little too tight, Joshua asked if anyone had a knife,” Ryan was quoted as saying. “About four people immediately brandished pocket knives—because, Texas!—then Jim watched as we ringed each other and kissed.”

Dun also said that their wedding ceremony was “the perfect balance.” Ryan and Dun got engaged in December 2018. Dun asked for the actress’s hand in marriage inside a treehouse in New Zealand. Cha Lino /ra