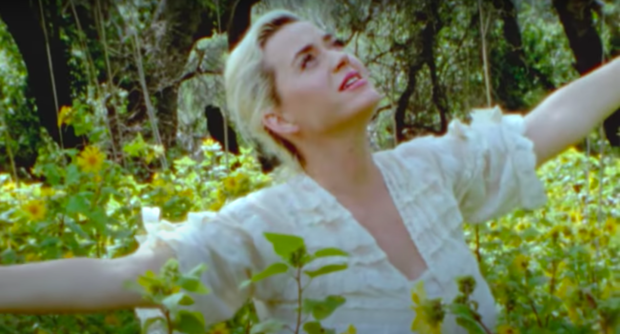 Pop star Katy Perry has launched her much-anticipated single “Daisies,” but contrary to some fans’ theories, the song is not a collaboration with Perry’s fellow pop singer Taylor Swift.

Perry sang in a bed of yellow daisies and flaunted her baby bump through the track’s music video uploaded on her YouTube channel today, May 15.

Perry’s new song sends a message of resilience through its powerful lyrics.

“They said I’m going nowhere / Tried to count me out / Took those sticks and stones / Showed ‘em I could build a house,” Perry sang. “They tell me that I’m crazy / But I’ll never let ’em change me / Til they cover me in daisies.”

While enjoying a dip in a rocky falls, Perry also went nude to display her sexy pregnant figure in the music video. Perry donned a lacy white dress while traversing various scenic outdoor spots including what appears to be a top of a mountain while the sun sets on the horizon.

“I wrote this song a [couple of] months ago as a call to remain true to the course you’ve set for yourself, regardless of what others may think,” Perry said.

“Recently, it has taken a new meaning for me, in light of what the whole world is experiencing,” she added. “Each of us is one in more than seven billion, with our own story of strength and resilience to tell.”

The singer, who is engaged to actor Orlando Bloom, is expecting to have their first child together.

Recently “Daisies” has been the subject of some fans’ hope for a collaboration between Perry and Swift. During the time that Perry announced the release date of the mentioned track, Swift coincidentally uploaded a photo of herself wearing a daisy sweater, which some fans took as a hint for a music collaboration.

“Daisies” is a part of the singer’s upcoming sixth studio album, which is still untitled as of this writing.  /ra