Queen Latifah: Let ‘Gone with the Wind’ be gone forever 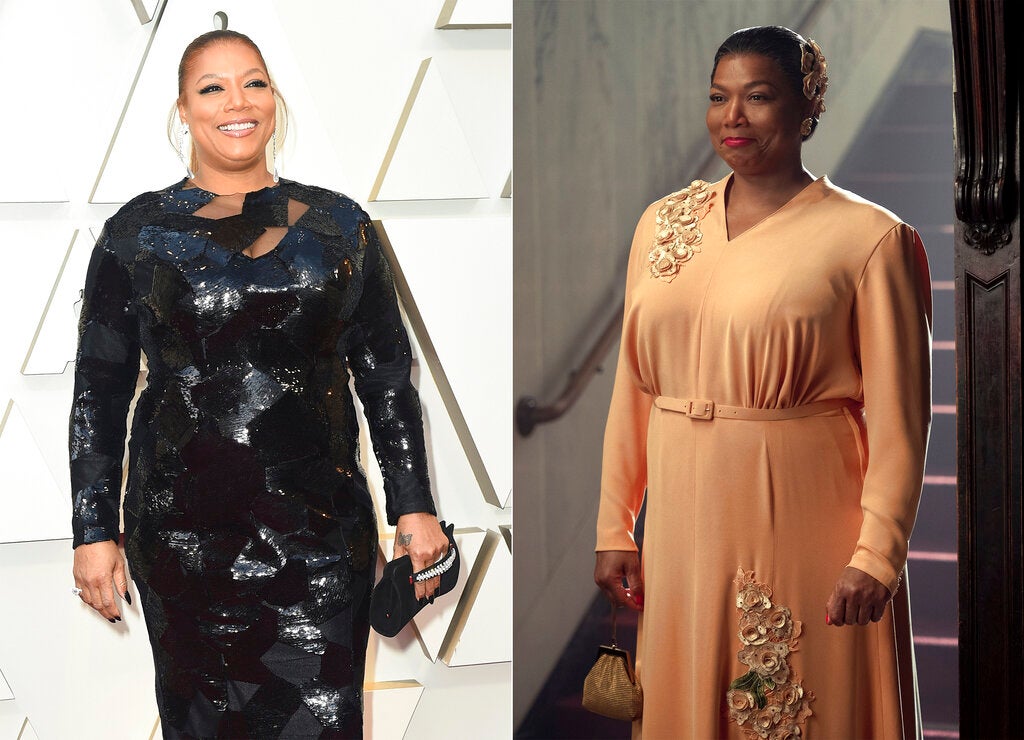 This combination photo shows actress-singer Queen Latifah at the Oscars in Los Angeles on Feb. 24, 2019, left, and Queen Latifah portraying “Gone With the Wind” actress Hattie McDaniel in a scene from the Netflix series “Hollywood.” (AP)

NEW YORK  — While some have criticized HBO Max’s removal of “Gone With the Wind” from its streaming service — including those who wonder if it hurts the legacy of Hattie McDaniel, the first African American woman to win an Academy Award — Oscar nominee Queen Latifah says good riddance.

“Let ‘Gone with the Wind’ be gone with the wind,” said the Emmy, Golden Globe and Grammy winner in an interview last week.

Latifah, who portrays McDaniel in Ryan Murphy’s Netflix “Hollywood” series, says the story behind McDaniel’s Oscar win is not as shiny as the golden trophy.

“They didn’t even let her in the theater until right before she got that award. Someone came outside and brought her into the auditorium. She wasn’t even allowed to sit in there. And then she had to read a speech that was written by a studio. You know that’s not what the hell she wanted to say,” she said.

“Then after that, all she could do was play the same kinds of roles … So the opportunities at that time and the way that those in power in that business were relegating us and marginalizing us and not allowing us to grow and thrive after that was just terrible. And a lot of that is still around today.”

Latifah spoke to The Associated Press while promoting her Queen Collective initiative, which seeks to highlight up-and-coming female filmmakers of color. She discussed George Floyd’s death, her feelings about her lyrics being chanted by protesters and more.

Answers have been edited for brevity and clarity.

AP: What are your thoughts on the protests following George Floyd’s death?

LATIFAH: This is like nothing I’ve ever seen in my life. And it’s also the fact that it’s happening worldwide. It’s time, you know? It’s time. What an opportunity we have right now. I can only liken it to what it was like for me as a kid, as a teenager — young 20s, early ’90s when there was apartheid in South Africa, and we weren’t with that. And rappers, we stood up and used our voices, and everybody used their voices.

AP: We’re seeing corporate America and brands embracing Black Lives Matter. Do you think it’s just popular to do so now or is it a sincere effort to bring change?

LATIFAH: I think it’s a mixture … we’re seeing things that have been coming for a long time, and this is the powder keg. This is the perfect storm, if you will, for the opportunity for change to come. So we shouldn’t stop — we shouldn’t take our foot off the gas. I read something Viola Davis posted, and … it ended with ‘Don’t take your foot off the gas,’ and that has sat in my mind and that has been my slogan in my brain every day.

AP: Protesters at a march were singing your song U.N.I.T.Y.

LATIFAH: That song is a stance. I wish it didn’t stand — I wish it would have played out. But to have to say “Love a black man from infinity to infinity,” “love a black woman from infinity to infinity,” but ultimately: U.N.I.T.Y. We do it together. You know, let’s all get it together. But I had to say things like that. We still have to say that. I have so many records that I wish were not useful anymore. You know records fought for women’s equality, fought for all of us to have an equal seat at the table. I wish we didn’t have to talk about this stuff, but it’s still happening.

I am both ripped apart on the inside and at the same time inspired, and I have renewed vigor every day because we have a lot to do. It’s an election year. I’m inspired by the youth being out there.

AP: This is your second year with the Queen Collective. Was there anything your learned or changed this year?

LATIFAH: The only thing that’s expanded my mind is that we need more support and we need to make more movies. We need more production because the same thing (happened) last year: we were able to do two films, (but) we got over 60 submissions last year … These amazing women filmmakers have shown that not only do they tell unique, interesting, cool stor(ies) — not just cool—. but stories that need to be told. But they also hire diversely behind the camera, which gives people experience.

AP: Billy Porter posted an Instagram video stating the black community needs to do a better job embracing the LBGTQ community in the midst of this “Black Lives Matter” movement. What are your thoughts?

LATIFAH: I 100% agree. You know, we don’t have the luxury of separating ourselves from one another right now. The whole purpose is inclusivity. … You should be respected for who you are, no matter who you are … that includes the LGBTQ community, especially our trans sisters and brothers that are being murdered in these streets for no reason, other than that they are or who they are, and someone decides that “I don’t like who you are” or “I want to attack you.” It just can’t fly.