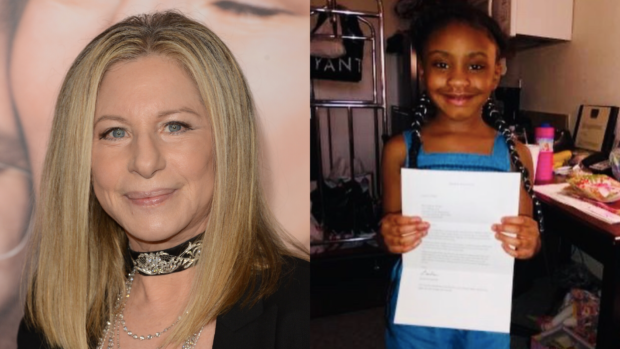 Barbra Streisand made George Floyd’s 6-year-old daughter Gianna a shareholder of Disney after giving her stocks of the entertainment company.

Gianna thanked the legendary singer for the gift, as seen on the child’s Instagram page last Saturday, June 13, showing what appears to be a letter and a certificate from Disney. Along with the stocks, Streisand also sent Gianna copies of her 1965 album “My Name Is Barbra” and her 1966 effort “Color Me Barbra”.

“Thank [y]ou @barbrastreisand for my package, I am now a Disney [s]tockholder thanks to you,” Gianna said.

The singer’s gift coincides with a huge wave of support pouring in for the child, after her father, George, died after a policeman kneeled on his neck in Minneapolis, Minnesota last month. Nationwide and global protests against persistent racism and police brutality followed.

Prior to Streisand’s gift, rapper Kanye West also had a gift for Gianna. A representative for West confirmed that the artist donated money to Gianna’s family that would fully cover her college tuition in the future.

A GoFundMe page has also been set up for Gianna. After reaching its initial goal of $1.5 million, the initiative has now surpassed its new target of $2 million. The fundraiser has collected over $2.1 million from more than 61,800 donors, as of writing.

The effort is organized by Stewart Trial Attorneys, the family’s legal counsel. It also clarified that it is the only fundraiser under Gianna’s name. JB

Read Next
Dimples Romana marks 17th anniversary with husband: ‘My heart will forever beat for you’
EDITORS' PICK
Individuals affected by ‘Karding’ now over 157,000
Newbie gamers are in for a treat with the power-packed feature of vivo Y16
House energy committee chair Arroyo bats for cheap electricity
Bongbong Marcos says PH ‘open for business’ with new Clark Airport terminal
Karding damage to infrastructure at P23M
Reignite your passion with the vivo Y35
MOST READ
LPA enters PAR, may develop into tropical depression
Angelica Panganiban ‘duguan, sugatang mom’ one week into breastfeeding
Soldiers are not errand boys, Tulfo tells defense officials
Charges readied vs gov’t guard with P290-M deposits
Don't miss out on the latest news and information.