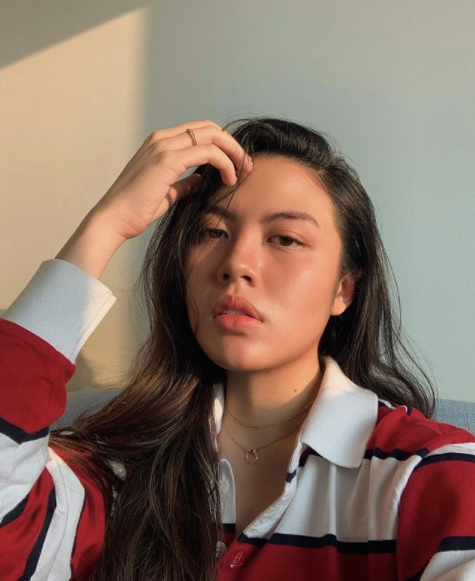 Frankie Pangilinan fired back at TV host Ben Tulfo after he said that the way women dress is “inviting the beast” — namely rapists.

“STOP TEACHING GIRLS HOW TO DRESS?? TEACH PEOPLE NOT TO RAPE,” Pangilinan tweeted yesterday, June 13, reacting to a news report of a police station in Quezon province that warned women not to wear short clothes and then report harassment.

Ben Tulfo, who hosts public service program “Bitag”, commented on Pangilinan’s sentiments last night. “Hija @kakiep83, a rapist or a juvenile sex offender’s desire to commit a crime will always be there. All they need is an opportunity, when to commit the crime.”

He also told women to watch what they wear to avoid sexual crimes.“Sexy ladies, careful with the way you dress up! You are inviting the beast.”

Pangilinan defended her points today, June 14: “Rape culture is real and a product of this precise line of thinking, where the behavior is normalized, particularly by men.”

Rape culture is an environment where sexual violence against women is the norm, and is perpetuated in behaviors such as objectifying women’s bodies, as per the Marshall University’s Women’s Center.

“[T]he way anyone dresses should not be deemed as ‘opportunity’ to sexually assault them. [E]ver,” she stressed.

Finally, she took a jab at the way Tulfo addressed her. “[C]alling me hija will not belittle my point.” She has also changed her name on Twitter to “hija”. 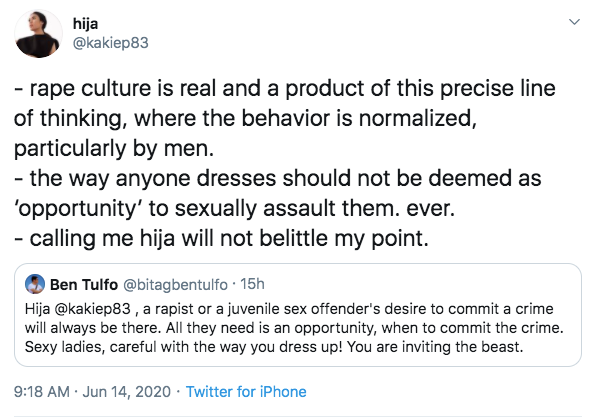 She shared too a screenshot of Tulfo’s longer statement on Facebook against her, where he called her “the wannabe smart aleck”.

the way he was braver on fb because he knows i’m not on there 💀💀 pic.twitter.com/fAuzS7ukhD

(You are too young to know about the world. The only thing you can do is to dress appropriately. Let us not stir their desires. That is what you can do.)

“[T]he way he was braver on [FB] because he knows [I]’m not on there,” Pangilinan remarked.

Appearing “young, pretty or desirable” is a false stereotype of rape victims, according to “Making Sense of Rape”, a published review of Supreme Court decisions by the Women’s Legal Bureau. In one case, an 8-month-old baby was a victim.

WLB previously told INQUIRER.net that victims of sexual abuse struggle to find justice and are further traumatized because of prejudices against them, such as in not being believed because of the clothes they were wearing at the time of incident. JB

With no closure from justice system, Filipino victims of sexual misconduct call out abusers online