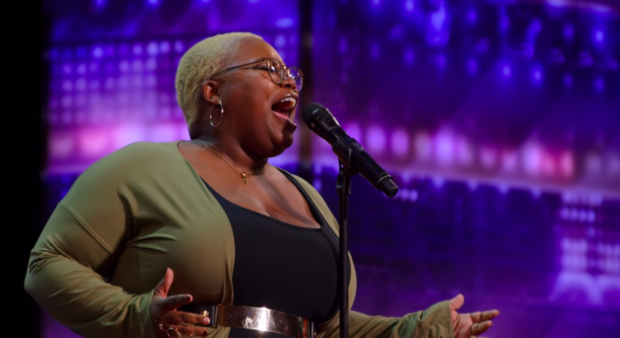 A single mother earned the Golden Buzzer on “America’s Got Talent” after impressing judges with her rendition of The Rolling Stones’ 1969 hit “Gimme Shelter.”

Cristina Rae, of Nashville, USA, received the coveted Golden Buzzer from judge Heidi Klum in a recent episode of the talent show, which was uploaded to its YouTube page yesterday, June 9.

Before Rae stepped onto the stage, her son Jeremiah waddled out first and immediately caught the attention of the judges and the audience. Rae followed and introduced herself while carrying Jeremiah with one arm.

“I want us to live in our own home, not just a house,” Rae stated.

After letting Jeremiah down and having him exit the stage, Rae began to sing Phil Collins’ “In the Air Tonight.” While her performance garnered a standing ovation from the audience, judge Simon Cowell asked Rae to perform another tune.

Rae quickly obliged and delivered her rendition of the 1969 hit “Gimme Shelter” by The Rolling Stones. Following her soulful performance, all four judges—Mandel, Klum, Cowell and Sofia Vergara—gave her a standing ovation along with the crowd.

“There is only one way to describe your voice, it is insanely good,” Cowell said. “There is absolutely no point making shows like this unless we find people like you.”

As for Klum, she described Rae as somebody who is “absolutely out of this world.”

“Are you ready for this right now?” she added while pointing at the Golden Buzzer on the judges’ table.

Klum then stood up and slammed her hand on the buzzer, letting golden confetti shower on the stage. Rae could not help but kneel to the floor while crying due to Klum’s decision.  The judge quickly made her way to Rae and hugged her as little Jeremiah approached his mom.

The rest of the judges also stepped onto the stage to congratulate Rae, while Cowell said to her: “I think you might be one of the best singers we’ve ever had.”

The Golden Buzzer automatically sends a contestant to the next round of the contest, regardless of the votes of other judges. It was introduced during the program’s ninth season and can only be pressed by each judge once.

“America’s Got Talent” is currently on its 15th season.  /ra

WATCH: Marcelito Pomoy sings ‘Beauty and The Beast’ for ‘America’s Got Talent’ finale