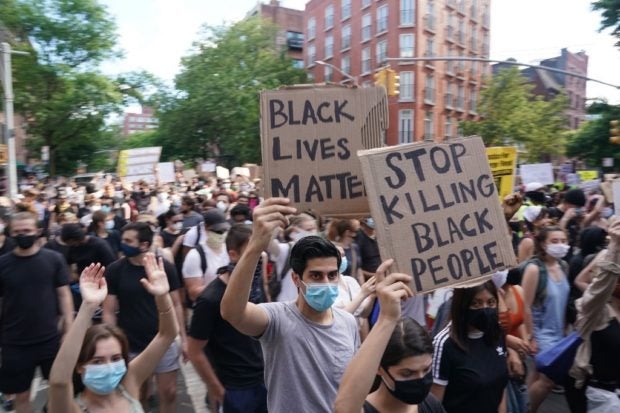 Protesters march and carry signs in the West Village as they demonstrate in outrage over the death of George Floyd at a rally on May 30, 2020 in New York. Image: AFP/Bryan R. Smith via AFP Relaxnews

Hip-hop group N.W.A’s classic protest song has seen a resurgence in on-demand audio streams, as mass demonstrations continue to erupt in the United States in reaction to the death of George Floyd in police custody.

“F**k tha Police” saw a 272% percent increase in on-demand audio streams from May 27 through June 1 compared to the five days before Floyd’s death, according to data analytics provider Alpha Data.

Alpha Data, which provides data for the Rolling Stone charts, noticed that the 1988 “Straight Outta Compton” cut saw a significant surge in listening on Sunday, May 31 and Monday, June 1 with 765,000 on-demand audio streams over those two days.

Mass protests in the U.S. over police brutality have also ushered in a renewed interest for several songs that tackle racism and racial inequality like D’Angelo and the Vanguard’s 2014 “The Charade” and Killer Mike’s 2012 “Don’t Die”, which respectively witnessed a 122% and 542% jump in streams.

Meanwhile, Childish Gambino’s “This is America” has become a TikTok anthem for protesting police brutality for the past month.

The Grammy Award-winning song had a resurgence on the Chinese-owned video-sharing app after user @carneyval uploaded a mashup of “This is America” with Post Malone’s “Congratulations (feat. Quavo).”

TikTok users began incorporating “This is America” and the related remix as a soundtrack for videos about racial inequality in mid-May, seemingly sparked by the arrests of two suspects in the case of the shooting death of Ahmaud Arbery.

According to Rolling Stones, James Brown’s “Say It Loud – I’m Black and I’m Proud” and Nina Simone’s rendition of “I Wish I Knew How It Would Feel to Be Free” by Billy Taylor and Dick Dalla have also received large spikes in streams in recent days.