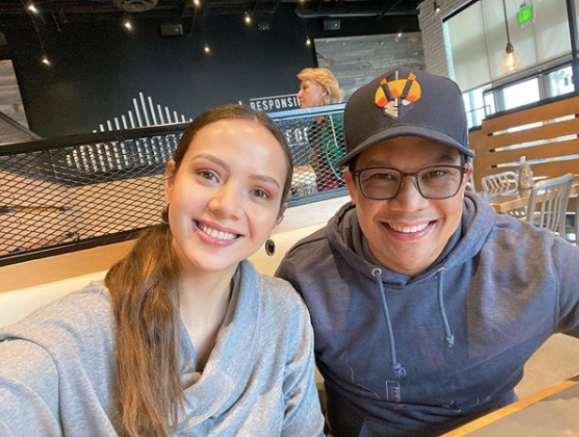 Mo Twister is now engaged to his longtime partner Angelicopter after staging a call to make a proposal on his podcast Friday, May 22.

Both were co-hosts on radio station Magic 89.9 and are now based in the United States.

The DJ shared a picture on Instagram Saturday, May 23, of Angelicopter (real name Angelika Schmeing) wearing a diamond ring while in their home studio.

He referred followers to his latest episode on “Good Times with Mo: The Podcast”, where he made the proposal on Friday.

Mo — real name Mohan Gumatay — tapped his podcast producer Anj to pretend to be a caller who was in a relationship for 10 years and had two kids.

Angelicopter seemed suspicious, asking early on, “Are you calling about us?”

While Anj aired the caller’s supposed grievances about not being married yet, Angelicopter said she understood why she wanted the relationship to become that of husband and wife. Meanwhile, Mo kept arguing that weddings are expensive.

“I told Mo if we’re not getting married by the end of this year… I’m not putting up with this anymore,” Angelicopter said.

There was some tension between the couple, with Angelicopter stating that she did not want a pricy wedding because she already experienced it in her first marriage.

“What’s important is that we are family,” she stressed.

Eventually, Mo asked the caller if her partner had an excuse for not proposing.

“You know, I just want him to say one thing,” Anj said. “I just wish he’d say this line you know: ‘Angelika would you take this ring and say yes to being Mohan’s wife?’”

Angelicopter said later on that it was at that moment Mo handed her a ring.

“Ha?” was her initial reaction, which led to Mo explaining that he had used the podcast to propose to her.

“Nakakainis ka (You are so annoying), I knew it. It sounded like us,” she said, sounding choked up in tears. “Of course, babe you know that naman (already), I’m crying na naman (again). I love you babe.”

Mo said he chose May 22 because they had discussed moving their November 22 anniversary to six months later, so that it would not pile up with the costs for birthdays, holidays and other events as the year ends.

The couple has a daughter together, Amsterdam, and is raising Angelicopter’s son from a previous relationship. Mo also has a daughter with former teen star Bunny Paras. JB