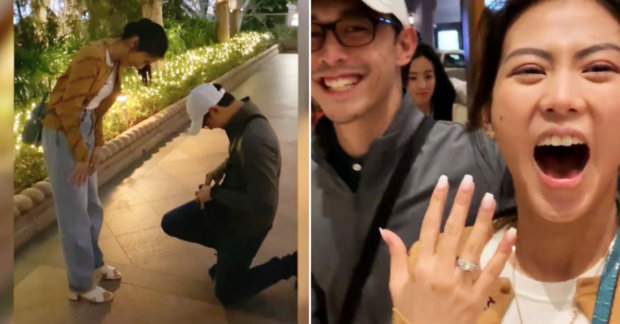 Mikee Morada got down on one knee in front of Alex Gonzaga during a vacation in Hong Kong.  Image: YouTube/Alex Gonzaga Official

After YouTube star and actress Alex Gonzaga announced yesterday her engagement to boyfriend Mikee Morada, she shared what happened behind the scenes in a vlog today, Jan. 17.

Alex detailed her trip to Hong Kong last December, which came with a chaperone of course, given her parents’ strict rules about dating even if she is already 32. Her parents, Bonoy and Pinty Gonzaga, followed on the trip too.

The video showed Alex up to her usual funny antics and being sweet to the Lipa City councilor as they toured Hong Kong, eating at Michelin-star restaurants and visiting shopping destination Harbour City.

Finally, the proposal took place on the evening of Dec. 27. While strolling along the garden of 1881 Heritage, which was filled with Christmas lights, Morada worked up the courage to ask her to marry him. The moment was funny in its own way, with Mommy Pinty cursing because she did not know where her husband was so they could witness the moment.

Alex was visibly kilig (giddy) and could not help jumping and laughing with tears of joy as Morada went down on one knee. As he showed her the engagement ring, she told him, “Ano tanungin mo!”

In a nervous voice, he asked, “Will you marry me?” The actress laughed and immediately answered yes.

It was revealed too that Morada had informed her parents of his plan the night before, and that he would have asked her earlier while in the hotel room, but the camera was not ready.

Alex said she had a feeling the proposal might happen on the trip and joked that it was the reason she got her nails done.

Alex Gonzaga to those losing hope on finding a significant other: ‘Dadating din talaga s’ya’