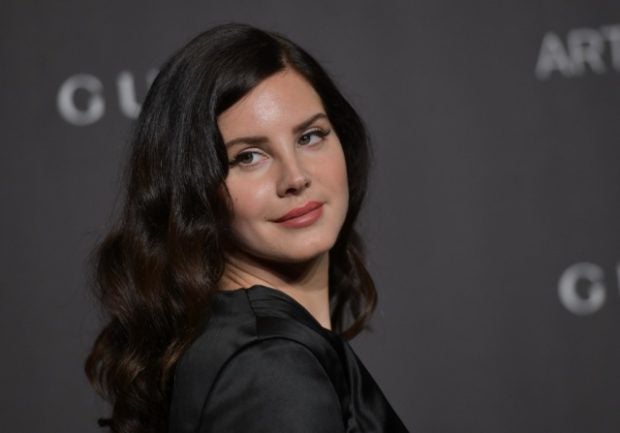 American singer-songwriter Lana Del Rey received backlash over her open letter addressing accusations that she “glamorizes abuse” in her songs.

Del Rey aired her frustration over how her songs are being received by the public through her Instagram post yesterday, May 21. The singer mentioned some female artists as examples of musicians who have had hit songs while covering the topics of sex, cheating and not wearing any clothes, such as Ariana Grande, Camila Cabello, Cardi B, Kehlani, Nicki Minaj and Beyoncé.

With this trend, Del Rey asked if she could finally write songs about “being embodied” and “feeling beautiful by being in love even if the relationship is not perfect,” without being “crucified.”

“I am fed up with female writers and [alternative] singers saying that I glamorize abuse when in reality I’m just a glamorous person singing about the realities of what we are all now seeing are very prevalent emotionally abusive relationships all over the world,” she added.

Del Rey also expressed the difficulty she has been experiencing in the past for some of the topics she chooses to cover in her songs.

“With all the topics women are finally allowed to explore I just want to say over the last ten years I think it’s pathetic that my minor lyrical exploration detailing my sometimes submissive or passive roles in my relationships has often made people say [I’ve] set women back hundreds of years,” she said.

Del Rey declared that she was not a feminist, but appealed that there must be a place in feminism for women who “look and act” like her.

She also believes her songs “paved the way for other women (singers) to stop ‘putting on a happy face’ and to just be able to say whatever the hell they wanted to in their music.” Del Rey recalled the time when she released her first two records and how she was deemed as “literally hysterical” by some.

Del Rey received harsh criticism for her post. Since majority of the artists Del Rey mentioned were women of color, she was also tagged as “racist” by some.

A few hours later, the “Summertime Sadness” singer returned to the post with a series of comments clarifying her statement. Del Rey said she loved the singers she mentioned and know them personally, which was why she mentioned their names.

“I would also like to have some of the same freedom of expression without judgment of hysteria,” she said. 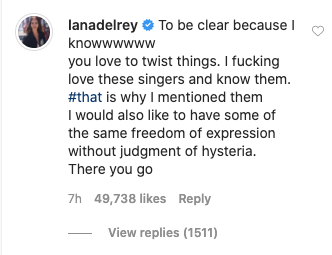 “[If] you want to try and make a bone to pick out of that like you always do be my guest, it doesn’t change the fact that I haven’t had the same opportunity to express what I wanted to express without being completely decimated and if you want to say that that has something to do with race that’s your opinion but that’s not what I was saying,” Del Rey added. 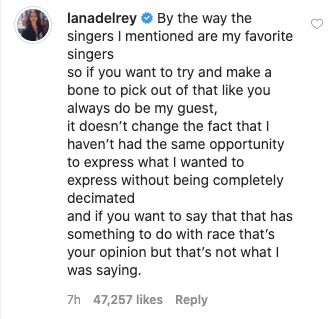 The singer also lamented that her post was made to be about a women of color issue when in fact she was talking about her favorite singers. Del Rey also slammed the comment that she was racist. 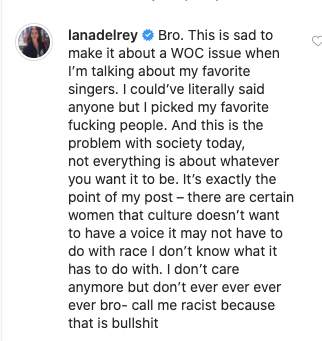 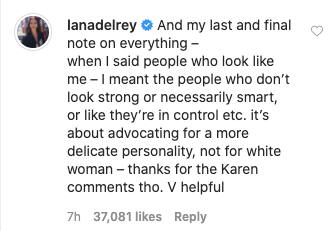 Lastly, Del Rey stressed that when she said “people who look like me,” she was referring to people “who don’t look strong or necessarily smart, or like they’re in control.” She added, “[I]t’s about advocating for a more delicate personality, not for white woman.”  /ra