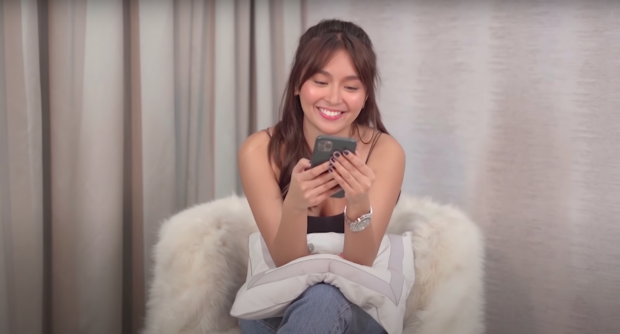 Kathryn Bernardo bravely faced her bashers and their negative remarks in a video yesterday, May 16, on her YouTube channel “Everyday Kath”.

Though the video comes days after she spoke up about the issue of the ABS-CBN shutdown, she stated in the clip’s description that it was recorded before the Luzon-wide enhanced community quarantine was imposed earlier this March.

Among the comments were jabs at her acting skills, looks and attitude. One remark that she emphasized described her as “sakang” or someone who is bow-legged. Upon reading it, Bernardo exclaimed that she had been anticipating the remark on her legs not being straight.

While it was one of her insecurities before, the actress has now learned to accept them and not be bothered by her legs.

(People say they are like parentheses. But they are a part of who I am.)

She also pointed out that it was her real-life and on-screen partner Daniel Padilla who helped her overcome her insecurity over her legs. Bernardo then stressed that she and Padilla love her legs despite her condition.

The actress also chided the basher, saying, “Come on, you kiss my f*ckin’ legs.”

Meanwhile, another Twitter user (@theapprenticeAG) said that Bernardo’s attitude was “chaka (ugly)” and that she would not have been on the sketch comedy show “Goin’ Bulilit” if it were not for director Bobot Mortiz.

Bernardo stated that she was very thankful for Mortiz and his help in her acting career, but did not agree that she had an ugly attitude.

“Basura is what Kathryn [is] made of… kita mo sa ugali at pagsagot… same ng nanay [niya],” another netizen (@OneLastTime0103) said.

(Trash is what Kathryn is made of… [it is] obvious in her behavior and how she answers back… same with her mother.)

Upon reading the tweet, Bernardo called her mother to see how she would react to the comment. However, the actress’s mom simply joked, saying, “Ohhh… Gaano ba tayo magandang sumagot?”

(Ohhh… How nicely do we answer back?)

Bernardo then advised those who dislike her and other celebrities to simply mute them on social media. On the other hand, she also thanked her fans for their continuous support and love. NVG

Read Next
Big Bang’s Taeyang opens up about his marriage and struggles
EDITORS' PICK
Novak Djokovic loses fight against Australia deportation
Metro Manila’s daily COVID-19 growth rate drops to 2% — Octa Research
SMDC’s Bloom Residences: A master planned community that cares for your health and wellness
Upsilon, Unilever give ‘real talk’ on climate change crisis
Over 3 Million worth of prizes to be won at Smart Padala’s SENDali Manalo Promo!
COVID-19 cases in PH pass 3.2 million mark with 37,154 new cases — DOH
MOST READ
‘Not my loss’: Did Kris Aquino just comment on her breakup with Mel Sarmiento?
CBCP head: Marcos dictatorship not a ‘golden age’ for PH
Learn from Dengvaxia vaccine controversy, gov’t told
Ivana Alawi tests positive for COVID-19, urges public to comply with health protocols: ‘No one’s above the law’
Follow @RArcadioINQ on Twitter
Don't miss out on the latest news and information.